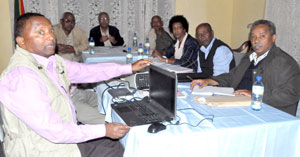 At the opening of the meeting, the Minister of Local Government, Mr. Weldenkiel Abrha, stated that in order to find immediate solutions for concerns faced by the public, administration offices need to effectively strengthen their work in all sectors.

Governors of the six regions presented annual reports of the programs carried out in their respective regions in the year 2015, including on social services, agricultural infrastructure, cultivation and its revenue, construction works, potable water projects, energy, transportation and communications, as well as other programs and accomplishments.

After assessing the reports that were presented, participants at the meeting conducted in-depth discussions on draft development programs for the year 2016.

The meeting of the Ministry of Local Government will continue until the 4th of February, 2016.