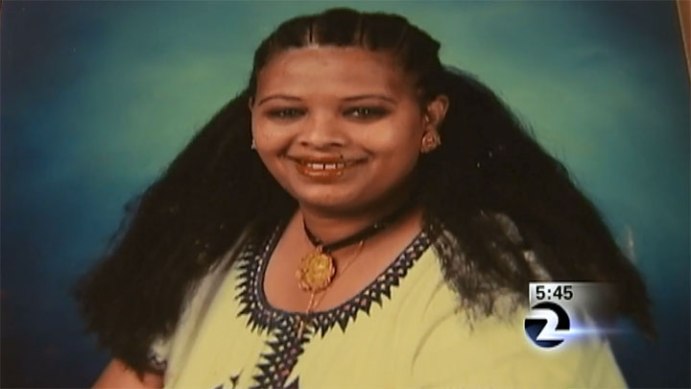 OAKLAND (HAN) March 28, 2014 – By Eric Rasmussen — Investigates recently spoke with the daughters of 59-year-old Meheret Tzegai, a woman they say has been detained in her home country of Eritrea in East Africa for nearly two years.
Her family tells 2 Investigates they don’t know where she is being held and she hasn’t been charged with any crime. Human rights activists call Eritrea one of the most repressive nations in the world.
Tzegai, a U.S. citizen, travelled to Eritrea in May of 2012. Her daughters said she was returning to celebrate the country’s independence day, but they got the call she had been arrested a few weeks after her arrival.
“It was terrible. It was scary,” said daughter Elilta Melles.

Melles contacted KTVU after she said the family couldn’t get answers anywhere else.
Tzegai’s family said they were told only that she was being held in one of Eritrea’s many government jails. Amnesty International recently documented an extensive network of detention centers in the country.
“We haven’t heard nothing,” said daughter Marhawit Melles. “They didn’t tell us anything about her, her whereabouts, how she’s doing. Is she still alive? Dead?”
Eritrea won its independence from Ethiopia in 1993, but Tzegai fled with her family ten years earlier, arriving in San Francisco. According to the U.S. Census Bureau, the Bay Area has one of the largest Eritrean populations in the United States.
Activists say there are more than 10,000 political prisoners in Eritrea and that what happened to Tzegai is not unusual.
“This is a common practice,” said Isaya Sium, an outspoken member of the Eritrean community in the Bay Area and one of a few willing to speak out against the country’s only president and dictator Isaias Afewerki.
“Our country has been ruled by rumors,” said Sium. “There is no rule. All you hear is rumors. If they want to arrest someone, they throw rumors and people will start believing those rumors sometimes.”
In 2013, an Amnesty International report found thousands in Eritrea “have been detained without charge in unimaginably atrocious conditions” including shipping containers.
Tzegai’s youngest daughter, Sara Melles, was locked up for a week while visiting Eritrea in 2001.
“I didn’t have my identification,” said Melles. “The military — they hit me, whipped me.”
Tzegai’s daughters say not knowing what their mother has been forced to endure has made the last two years unbearable.
“I feel bad eating because I don’t know if she’s eating,” said Marhawit Melles through tears. “If I’m asleep, I feel bad [not knowing] if she’s cold.”
2 Investigates repeatedly called the Eritrean Embassy in Washington D.C. to ask about Meheret Tzegai, but has received no response.
A U.S. State Department official told KTVU they are aware of Tzegai’s case but “have not received any formal communications from the Eritrean government of such an arrest or detention.”
After 2 Investigates reached out to Congresswoman Barbara Lee, her office met with Tzegai’s family.
In a statement to KTVU, a spokesperson said: “The Office of Congresswoman Barbara Lee continues to work with the State Department on the complex case involving Meheret Tzegai, but we are unable to comment on the specifics.”
Tzegai’s family said they’ve been told the fact that she entered Eritrea with dual citizenship has complicated matters, but say they’ll settle for nothing less than her safe return.
“I would tell her that I love her and to keep her head up and to know that we’re fighting for her,” said daughter Elilta Melles. “We’ve never given up hope and we won’t.”

HAN & Geeska Afrika Online (1985-2014), The oldest free independent Free Press in the region, brings together top journalists from across the Horn of Africa. Including Ethiopia, Somalia, Eritrea, Sudan, Djibouti, South Sudan, Uganda, Kenya, Oromo, Amhara, Somali, Afar and Harari. Plus, we have daily translations from 150 major news organizations in the Middle East and East African regions. Contact at news@geeskaafrika.com –

Have you been affected by this story? You can share your views and experiences with us using this form: HAN@geeskaafrika.com