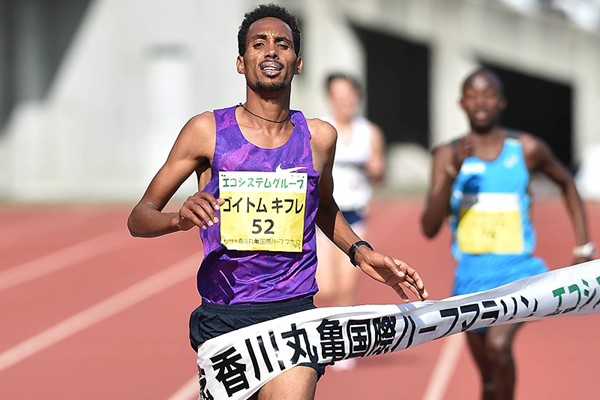 The men’s race started relatively slow with the first 5km covered in about 14:27. The pace then gradually picked up and the 10km mark was reached in 28:50. At that point the lead pack contained 11 runners, including Kifle, Kenya’s Dominic Nyairo, Tanzania’s Fabiano Sulle and Japan’s Keijiro Mogi.

The pace continued to pick up and 15km was passed in about 43:05. By this point the lead pack had been reduced to four runners: Kifle, Sulle, Nyairo and Mogi. Sulle fell behind over the course of the next few kilometres, and at 20km Kifle led Mogi and Nyairo by four seconds.

Although Mogi and Nyairo tried valiantly to close the gap on Kifle, the Eritrean held on for the win in 1:00:49, one second ahead of Nyairo. “It was nice to see lots of fans and supporter along the course,” said Kifle after recording the second-fastest time of his career.

Perhaps the most surprising performance in the race came from third-placed Mogi. His best before today was a modest 1:03:11, but the 20-year-old reduced that to 1:00:54 to move to sixth on the Japanese all-time list.

One of the fastest-improving runners in Japan, Mogi showed a hint of what was to come late last year when he finished third at the Kosa 10-mile race in November in 46:08.

The men’s event in Marugame doubled as the qualifying race for the IAAF World Half Marathon Championships in Cardiff, and since Mogi was first Japanese finisher, he is expected to be selected for the Japanese team.

“I am happy that I was able to run with the leaders all the way, but disappointed that I could not win,” said Mogi. He later added on Twitter: “Third in Marugame Half. Japanese team for World Half. Britain here I come!”

Sulle finished fourth in a PB of 1:01:19 and debutant Keisuke Nakatani was fifth in 1:01:21, becoming the third-fastest Japanese collegiate runner in history.

Two runners who are aiming to qualify for the Japanese Olympic marathon team at the upcoming Tokyo Marathon ran the Marugame Half Marathon as a tune-up race. Tsuyoshi Ugachi was 23rd in 1:02:41, while Arata Fujiwara was 36th in 1:02:57.

Australia’s 2013 Marugame winner Collis Birmingham was 11th in 1:02:01 while Masato Kikuchi, the third-fastest Japanese runner ever, was a disappointing 16th in 1:02:18, nearly two minutes slower than his best. World marathon silver medallist Yemane Tsegay was 31st in 1:02:53.

KIRWA LIVES UP TO EXPECTATION

She covered the first 5km in 15:45, well inside the pace required to beat the 1:07:26 course record. Although her pace dropped slightly over the next 5km segment, covering it in 16:06, she stretched her lead over Diane Nukuri from seven to 32 seconds and was still on course-record pace.

But with no one to push her, Kirwa could not maintain her momentum and she passed 15km in 48:09, making a course record unlikely. She was, however, comfortably ahead of her opponents as Nukuri and defending champion Eloise Wellings were 49 seconds adrift.

After covering the next 5km section in 16:23, Kirwa’s victory was assured and she crossed the line in a Bahraini record of 1:08:06, winning by one minute and 17 seconds.

Nukuri finished second in 1:09:23, the second-fastest time of her career and just 11 seconds shy of her PB. Despite setting a PB of 1:09:29 and running more than a minute quicker than her winning time from last year, Wellings’ performance today was only good enough for third place.

Japan’s 21-year-old Yuka Ando was fourth in 1:10:10, just missing out on her PB by 19 seconds. “I wanted to see if I can challenge fast runners from abroad but I was not able to stay with them,” said Ando.

She was followed by Rei Ohara in 1:10:42, reversing their positions from the Sanyo Road Race Half Marathon in Okayama last December.

For the Japanese women, the Sanyo Road Race – not the Marugame Half Marathon – is the qualifying race for the World Half Marathon Championships, so Ohara is currently in a better position to make the team for Cardiff.