Home Eritrea Eritrea: Inside the UK Asylum System: From Eritrea to Northern England 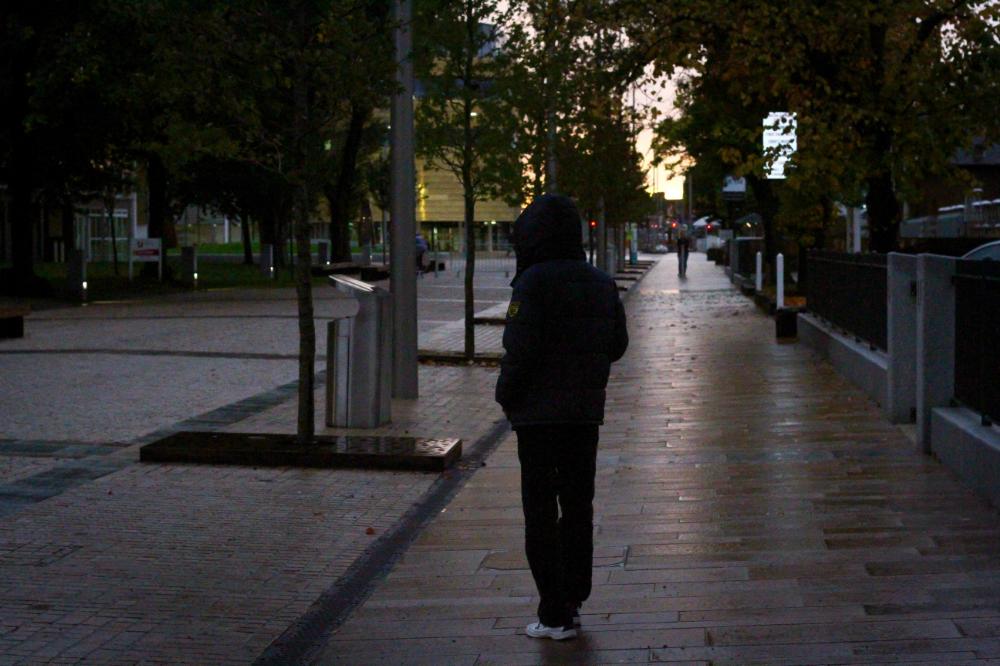 LONDON (HAN) February 19, 2016 – Public Diplomacy and Regional Stability Initiatives News. By: Sally Hayden. It was twilight in the port town of Calais, France, when I last saw Birhan. As we spoke, his eyes darted from side to side. His brown hoodie smelled of tear gas. He had just eaten his only meal of the day.

“To live or die, it’s the same for us,” he told me at the time, explaining his determination to get to England, risking his life on the way.

Several days after I returned to London, Birhan messaged me saying he had made it through the Channel Tunnel. Now, two months later, I had taken the train 250 miles up to Middlesbrough to meet him.

When I arrived, it was raining. The train station seemed like a place that is permanently damp. A nurse smoked outside.

Once Birhan arrived we got a taxi to his current accommodation. In Calais we couldn’t get in a car together — anyone who transports migrants can be accused of human trafficking.

Our Scottish driver asked how we know each other. “We met in France,” I answered.

At Birhan’s house — situated in the middle of a plain, terraced row, though its red door branded it as likely inhabited by asylum seekers — he made me tea and pizza. The place was like a student’s: minimal possessions and a large, broken TV in the living room. Six asylum seekers were living there, all Eritrean. The pizza was thick; while I ate slices, Birhan tore small pieces off the crust. He offered me sugar for my tea from a mayonnaise jar.

Birhan’s next door neighbors are Iraqis who have been here since 2003.

Middlesbrough, a town in England’s northeast, is the only place in the UK that breaks government guidelines stating no more than one in 200 people in a given local population should be asylum seekers. In Middlesbrough, it’s now reported to be one in 173 people. Figures from June — before the majority of last year’s arrivals — showed Middlesbrough was already housing 746 adult asylum seekers in a town of around 140,000.

In 2015, European Union member states received the highest number of asylum applications since the breakup of the former Yugoslavia more than 20 years before, as the planet experienced its biggest migration crisis since World War Two. Between January and September last year, 698,055 asylum seekers applied for asylum with Europe, 21,340 of whom came from Eritrea.

Related: ‘Everyone Will Make It One Day’: Meeting the Calais Migrants Who Dream of England

Eritreans are the most common nationality applying for asylum in the UK, with 3,726 claiming asylum in the UK in the year ending September 2015, according to government figures.

What are they fleeing from? In June, a United Nations human rights report was explicit in its condemnation of the Horn of Africa dictatorship, sometimes referred to disparagingly by critics as “Africa’s North Korea.”

“The government of Eritrea is responsible for systematic, widespread, and gross human rights violations that have created a climate of fear in which dissent is stifled, [and] a large proportion of the population is subjected to forced labour and imprisonment,” the report said. Some of these violations may constitute “crimes against humanity,” it argued, citing “an array of human rights violations on a scope and scale seldom witnessed elsewhere… It is not law that rules Eritreans — but fear.”

Most young Eritreans are forced into indefinite army conscription as teenagers, justified by the government because of the country’s tense relations with Ethiopia.

Those seen as a threat to the Eritrean regime are arbitrarily detained, while Eritrean officials have also admitted torture may happen in some prisons, though they claim it’s not “systematic.”

When Birhan arrived in the UK, he immediately called his family — who were audibly relieved because they know many people have died trying to get through the Euro Tunnel which runs under the English Channel from France into Britain. “And they know if I enter here I will be safe from everything, that no danger will affect me in England because this country is a peaceful country,” he said.

Birhan changed his sim card after he left Calais, discarding numbers and mentally detangling himself from the fellow migrants and refugees he met there. However, 20 days after he got to Middlesbrough he was walking through the town’s center when he came across another Eritrean acquaintance from Calais. The two greeted each other joyously.

Then they compared details of how they made it through: for Birhan it had followed weeks of attempts. “As before, we tried to enter the train station and we stayed under the train,” he recounted. “It is so dangerous but we had to do that. We stayed like 10 minutes or 15 minutes under the train.” When the train began to move, Birhan said they jumped on board. “At that time we knew that no one would [catch] us.”

Once they arrived in Dover, a coastal town in England’s southeast, Birhan and his companions handed themselves over to police. “They accepted us and they asked us how we came.”

“We asked them to be concerned about us, to save our life. They asked do we want asylum support, we said yes. They gave us a screening and an ID card and then they put us in London. We stayed five days, or seven days.” Then Birhan began his first tour of England: he was taken to Wakefield in west Yorkshire, where he stayed less than three weeks, before being moved on to Middlesbrough.

“Everything is going well,” he said — but he’s still scared. Without papers, you can do very little. “You eat, you sleep, the life is meaningless.”

Now he was readying himself for his asylum interview. Birhan had spoken to a lawyer for just 15 minutes, but was told he should be fine. There will be two main questions, the lawyer said: “What is the main point that led you to leave your country? And what will happen to you if you return?”

In the meantime, he was receiving 35 pounds ($53) each week, which was enough to buy food in a local budget food store, and to save a very small amount.

When we met in Calais, Birhan described Eritrea in one word: “dark.”

“Most of the European Union, they say that there is no problem in Eritrea. But they don’t know,” he stated.

In Eritrea, Birhan said, fear “grows with us from childhood.” For Birhan, the spectre of what could happen to him hung on a loss: when he was just three years old, in 1992, both his 23-year-old brother and his uncle suddenly disappeared without explanation. Years later, when Birhan was 19, his community was asked to attend a meeting with the local authorities. Frustrated after coming of age with no answers, he publicly asked: ‘Where is my brother? I want to know where he is. If he did a crime also, I want to know what happened to him, I want to know where he is.”

“Then they were silent and they came in the night time,” he recounted. “They covered my eyes and put me in a jail for nine months. I don’t know which jail they put me in. Nine months, even they will never allow you to go to the toilet, they will give you [a bottle to pee in]… You are beaten every day.”

“Eritrea is not a country. It is like a group of people leading without any rule, without any rights of the people.”

Related: ‘This Is the Jungle’: Calais Migrant Camp Now Includes a Church, a School, and a Nightclub

Birhan — whose name has been changed at his own request — doesn’t fit the characteristics of an “economic migrant.” He said with some pride that his father owns 150 orange trees. He rarely went hungry while living at home. Instead, he left to escape repression.

“No one wants to die. No one wants to throw [their] life in the sea. No one needs that, but the life and the death becomes the same for us,” he said.

Birhan accused Eritrean President Isaias Afwerki — who has led the country since it gained independence from Ethiopia in 1993 — of inciting hatred among citizens, encouraging them to distrust each other and even to inform on each other. “[Eritreans used to] live together, eat together, pray together. Now… they fight each other.”

Beyond this, Birhan spoke fondly of Eritrean culture, speaking about the Tigre language, their music, showing photos of the traditional wedding he and his wife had. He then noted that polygamy is often accepted in Eritrea, and he believes it even serves a purpose — evening out the noticeable gender imbalance that was a hangover of the war for independence. I said polygamy wasn’t legal in the UK, but gay marriage is. The slight, gaunt man looked confused, before laughing. “See, there is so much freedom here.”

Meanwhile, Eritrea — a country of less than 6 million people — seems to be steadily emptying. The global refugee population of Eritreans is in the 100,000s. Hundreds more cross the border to Ethiopia every day.

Girmay Abraha, the national counselling supervisor for international non-profit the Center for Victims of Torture (CVT) — which works with Eritreans in refugee camps in Ethiopia’s north — told VICE News he is fighting a losing battle. Though many new arrivals bear scars of torture after they cross the border, it is often impossible to make them stay in camps for the duration of a 10-week program aimed at combatting trauma. Quickly, they move on. Their destination is usually Europe.

After Birhan escaped Eritrea he walked thousands of miles through the Sahara Desert. It took 16 days. He was with a group of around 70 others led by smugglers. “When anyone asked for water they will show you the gun,” Birhan said.

“If you say anything they will shoot you, they don’t care about you.”

Other Eritreans have told VICE News similar stories. Many claim that the much-highlighted disparity between the numbers of men versus women who make it to Europe is something that happens en route: that the numbers escaping Eritrea are roughly equal, but more women perish or are kidnapped along the journey. One Eritrean man said by the time he made it to Italy the ratio of women had gone down from 50 percent to 25 percent — in Calais women made up about 10 percent.

After Libya, where migrants face imprisonment and torture by smugglers and militias, there is the perilous journey across the sea. Birhan’s voyage across the Mediterranean to Italy took three days. “It was a small boat… in the water we are moving like a small thing. So I was thinking that today is the last day of my life.”

The main reason Birhan wanted to come to England is because his wife is here. They’ve been married six years — they met while studying. After their marriage, she traveled to Saudi Arabia to take up a job as a domestic worker, but was abused by her employers. Eventually engineering an escape, she fled to the UK and has been here a year. They’ve only seen each other once since he arrived — spending just two hours in London together, when she visited with a relative.

Birhan’s wife — who VICE News agreed not to name — is now living in Birmingham, Britain’s second city. She shares an apartment with two others, attends English classes, and receives 39 pounds ($60) each week from the government while she is waiting to find a job. If Birhan discloses to the Home Office that he is married to her, he believes he will lose his own meager income, but he said that once he gets his papers the two will decide which city is best for them to live in.