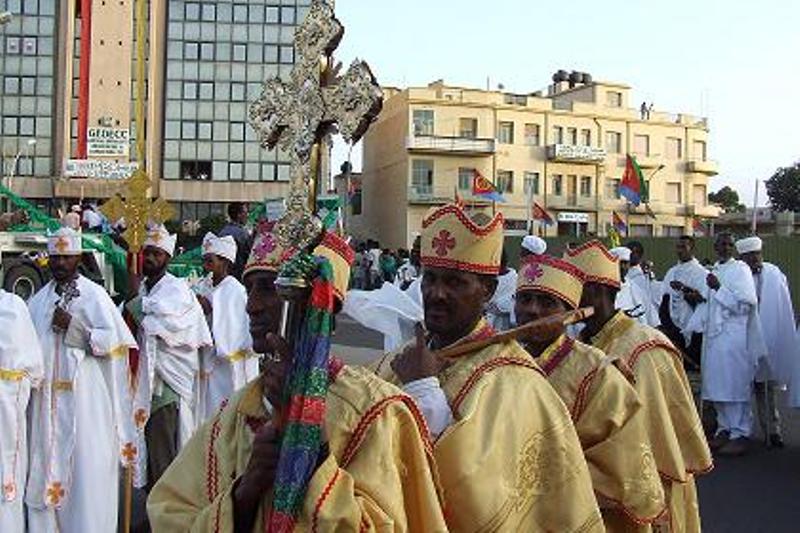 Asmara (HAN) June 10, 2014 – The Eritrean youth are running a forced labor program that is spawning human rights violations and fueling a refugee exodus, according to a report that will be debated next month at the U.N. Human Rights Council.

Eritrean youth are the most attempting the risky crossing from North Africa to Europe by boat, a trip that has killed hundreds so far this year

Sheila Keetharuth, an independent investigator who is the U.N. “special rapporteur” on human rights in Eritrea, wrote that torture, sexual violence and extra-judicial killings “continue unabated” in Eritrea.

Four Eritrean bishops have issued a rare criticism damning the situation in the authoritarian Red Sea state, according to a copy of their letter released online. The four  Eritrean bishops are Christian Orthodox church are Mengsteab Tesfamariam, bishop of the capital Asmara, as well as Tomas Osman of Barentu, Kidane Yeabio of Keren and Feqremariam Hagos of Segeneti.

The Bible and history of Christianity in Eritrea dates back to the Apostolic Era. In ancient times, Yemeni and Syrian Christians settled in the port cities of Adulis (near Massawa) and Avalites (Assab) along the Red Sea in the first century, making converts among the locals. In the centuries that followed, churches were built and the Gospel was preached throughout the highlands, particularly in Akeleguzai, Hamasien, and Serae.

The letter highlighted the plight of tens of thousands of Eritreans who have fled across the heavily guarded border into neighboring nations, running away from open-ended conscription and the iron-grip rule of President Issaias Afeworki.

Such outspoken views are rarely heard from inside Eritrea, ranked worst in the world for press freedom by the rights group Reporters Without Borders.

“There is no reason to search for a country of honey if you are in one,” the letter in Eritrea’s Tigrinya language read, according to a translation from the opposition website Awate.com.

Eritrea’s youth were leaving in search of “peaceful countries, to countries of justice, of work, where one expresses himself loudly, a country where one works and earns,” the letter added, signed by four bishops from the country’s influential Coptic Orthodox Church.

The UN estimates as many as 3,000 Eritreans flood into Sudan and Ethiopia every month, from a country of some five million people and about the size of England.

“On top of the crisis of people leaving their country, the family unit is fragmented because members are scattered in (national) service, army, rehabilitation centres, prisons,” the lengthy letter read.

“Aged parents are left with no one to care for them, and have been spiritually damaged. And all that combined is making the country desolate,” it added.

There was no immediate response from Eritrea’s leader or Ministry of Information.

The four bishops, from Eritrea’s Christian Orthodox church are Mengsteab Tesfamariam, bishop of the capital Asmara, as well as Tomas Osman of Barentu, Kidane Yeabio of Keren and Feqremariam Hagos of Segeneti.

“All those who are arrested should first be handled humanely and sympathetically, and then, based on the accusations against them, they should be presented to a court,” the letter added.

The letter was issued last month for Eritrea’s 23rd anniversary of independence from arch-foe Ethiopia, but was only released on the Awate.com site.  AP.