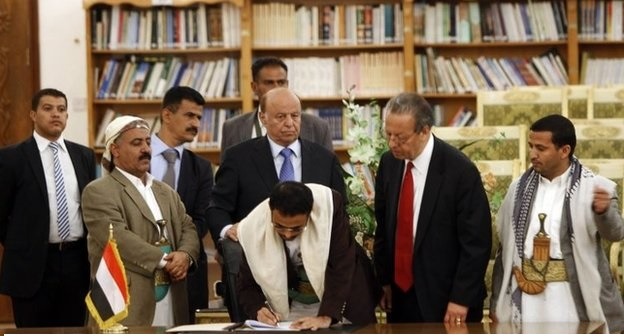 Houthi leaders said they have approached Iranian government, their main Shiaa in Tehran to send gasoline to offset supplies cut off by neighbouting GCC led by Saudi Arabia.

Another delegation is planning to visit Ethiopia in the coming weeks, they said. Houthi leaders say their interim government is trying to gain legitimacy in Africa and Asia.

“We are doing what any new regional authority does, and that is to seek international alliances that can help balance the new face of Yemeni politics,” said Ahmed Bahri, political director of Houthi Haqq Party in Sana’a.

President Mansour Hadi move to the southern port city of Aden, where he is appealing to his Yemeni traibal allies at home and abroad for financial and political support for Adan administration. The U.S., the Sunni monarchies of the Gulf and the United Nations have strategically supported the president.

President Hadi managed to escape the house arrest imposed on him and make his way to Aden on 21 February.

In Aden, President Hadi announced his commitment to his Presidential legitimate right as Yemen’s president and said that “all decisions issued since 21 September, 2015 are void and illegitimate”.

The diplomatic standoff threatens to split Yemen and trigger a civil war fought along Yemen’s many sectarian, political and geographical fault-lines, which can influence security and stability of Eritrea, Djibouti and Sudan.