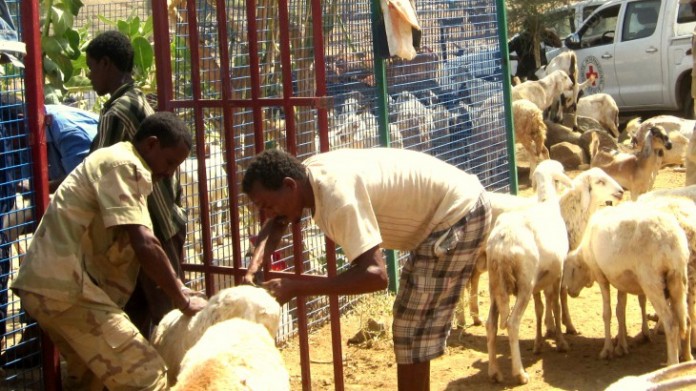 ASMARA (HAN) March 31. 2016. Public Diplomacy & Regional Security News. For the residents of Adi Ashker – a small village in Eritrea of 1,000 people – livestock means everything. The community’s ability to survive largely depends on the well-being of their sheep, goats and cattle. In addition, a family’s wealth is directly tied to the number of animals they own, so keeping livestock fit and free from disease and parasites helps keep the whole community secure and resilient to external shocks.

Located in southern Eritrea, Adi Ashker is semi-arid. The village’s semi-nomadic livestock farmers and animals wander for two to three hours to find grazing land and water. Farming is a challenge, though the community grows grains and sorghum. Still, it is the animals’ health that matters most.

”Should we need any cash for our day-to-day activities or a difficult situation to overcome, we sell our animals,” says Mengisteab, a resident of Adi Ashker, which is located in the Mai Mine zone of the Debub region. “Also, it is with the help of our oxen that we plough our agricultural land. Our lives largely depend on them. If they are sound and well, we are too.” The main challenges in relation to the animals are recurrent drought and animal diseases, both of which hamper the productivity of the animals, Ashker added.

An anti-parasite treatment campaign carried out by the ICRC in cooperation with the Ministry of Agriculture has been conducted two times per year for the last three years in Mai Mine, a region close to the border with Ethiopia. More than 2.4 million animals were treated against Ecto- and Endoparasites one time during 2015 and over 600,000 were treated two times based on the prevalence of parasites in some areas of Eritrea.

In response to the renewed outbreak of the small ruminants pest (PPR), a parallel vaccination of sheep and goats against this epidemic disease has been carried out since October 2015. The inhabitants of Adi Ashker, a community of both Muslims and Christians, take full advantage of the campaign even though animals who receive the lifelong immunity are tagged in the ear. Such a mark “shows also that the animal is vaccinated and healthy,” one livestock owner said.

Finding quality drugs for the animals is difficult for residents, said Gebreigziabher, a village elder who came with his animals for treatment at a vaccination campaign in January. “What we can find in the local market is of poor quality and the nearest veterinary centre is very far, taking us eight hours round trip. So every year we wait for this campaign to come, because it is a very effective campaign and we always see a noticeable change in the conditions of our animals,” he said.