Home frontpage Eritrea: A Glimpse: “Tour of Resilience for Development” 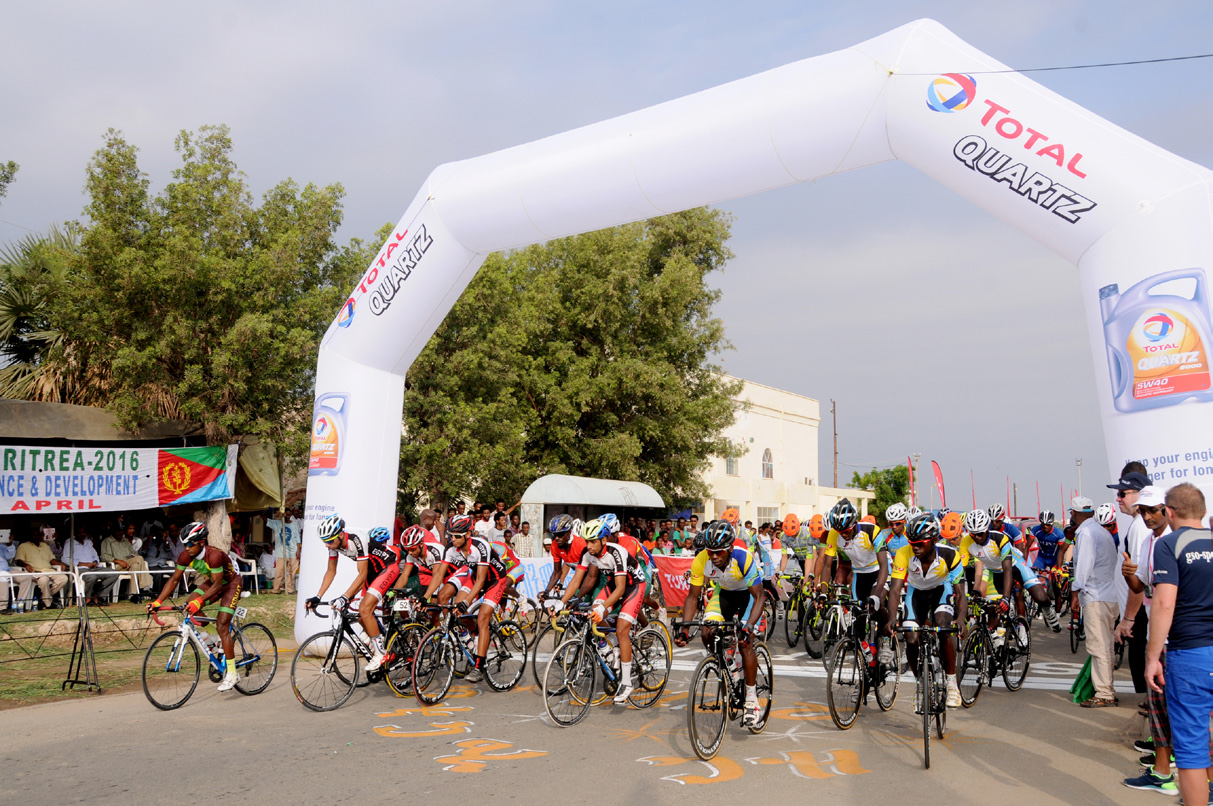 Share on Facebook
Tweet on Twitter
ASMARA (HAN) April 20, 2016. Public Diplomacy & Regional Security News BY:Billion Temesghen. The Tour of Eritrea is being promoted for the 6th time this year, under the theme of “Tour of Resilience for Development”. The Tour includes eight separate classifications: a one day race, two circuits (the Massawa and Asmara circuits) and five stages.
Participating the tour are eight teams: national teams of Eritrea, Egypt, Rwanda and Sudan. Followed by UCI professional continental team Amore Vita of Ukraine which is based in Italy, UCI continental team Bike Aid for Germany and regional club teams Tsinat and Salina.
The tour officially started on Saturday April 16th in Massawa with a one day primarily race “Fenkil Challenge” from Foro to Dongolo. Upon our arrival to Massawa at around 6 pm local time, we received the typical yum ‘Massawino’ welcome that Massawa people are known best for.
All in all, 44 riders lined up in the starting line at 8 am, with 27 000 dollars prize pending for the winner.
According to UCI’s parameter, Fenkil Challenge is a one day race, with a 1.2 category. The route which covered 113 km, extended from Foro to Ghindae, a flat race with two uphill challenges.
A break away was formed at 13kms away from the beginning line. The group that started off with 44 riders got divided in two with a leading group of 15.
The leading group was formed by three riders from the Eritrean National Team, three of Tsinat, three from Salina, two from Amore E Vita, two from Bike Aid and two from Rwanda National Team. They showed fast advancements with great speed, remarkably parallel, until Hirgigo town, leading the way at a time gap of 0:1:30 second ahead the peloton.
One group after another, the three groups encompassing the 44 riders reached Massawa, after 27 km of pedaling in an hour and five minutes.
70 kilometers away, the leading group of five started enlarging the time gap with more speed, meanwhile the two following groups teamed up in one peloton.
The Dongolo area presents a couple of mountings. Surprise for the riders! More steering, pedaling and climbing. As such in Dongolo Tahtai, the time gap between the groups declined to one minute. The leading group slowed down while climbing. At the same time, one minute away the now new amalgamated peloton speeded up as riders from the Rwandan National Team pedaled tactically, forcing the rest to keep up to their own beat of speed: it was Rwandan speed or nothing!
In the mid of the uphill the leading group of five got cut down to three: Yonas Fessehaye from Salina and Amanuel Menghis of Bike Aid were left behind. Eventually being joined by the swift of speedy riders of the peloton.
In a little while, the Rwandan team showed further synchronized energy, setting new time and speed of their own, which prompted the peloton to velocity; as a result, all of the groups clustered in one big group for few kilometers.
After another climb of the Dongolo Lailai area, the big group was divided again.
A new leading group was formed. However, Kibrom Mehari from Tsinat escaped, being the new sole leader. He was, after some time, joined and overlapped by Michael Habtom and Million Amanuel, trailed by Jean-Claude of the Rwandan Team and Adhanom Zemikael of Tsinat.
Towards the end, Jean-Claude of team Rwanda could not keep up pedaling with the leading team, he was left behind letting a noticeable gap keeping him away.
The final leading group arrived at the finish line led by Michael Habtom, at 11:00:00 am, at Ghindae town.
The remaining riders followed consecutively.
A yellow Jersey for first place holder Michael Habtom of Salina, Blue to Adhanom Zemikael for ‘best under 23’ and white for ‘best foreign rider of the day’, Jean-Claude of Rwanda.
There was more good news for first place winner Michael Habtom of Salina. Indeed, soon after finishing the race with glory, Michael received a call from home announcing a great news: the birth of his baby!
His first born, that’s what Michael told Eri-Tv.
On to the second race of Sunday:
‘The Massawa Circuit of 117.7 km in 11 laps each of 10.8km; riders from 8 teams lined up in the starting line of Tiwalet and started at 8:30 the circuit around the beautiful port city of Massawa. 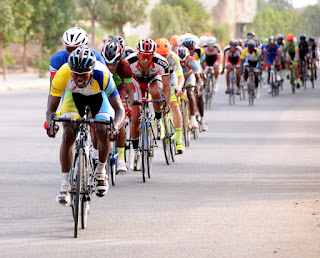 From the start, the Rwandan team pulled the strategy they used on the previous challenge: ‘team velocity’ having the rest of the riders pedalling to fit in the Rwandan beat. Shortly after Eritrean riders from Tsinat and Salina teams overlapped the speed creating a new pace getting them to the lead. Nevertheless, the group of riders did not keep any slower. This went on for quite an extended time until the group got divided into two.
A new leading group was created comprising of riders from Tsinat, Salina, Bike Aid and Amore Vita.
Highly synchronized team work of the Amore Vita riders, which lasted throughout the whole race, kept them at the front of the peloton repeatedly.
A new leading group was formed again composed by Yonatan Hailu, Tesfom Okbamariam and Hanibal Tesfai, and kept increasing the distance with the peloton.
At 9:04, local time, the time gap between the leading group and the peloton was 00:01:25 and it rose to 00:02:28 increasing until the 6th lap. The sudden steady speed that lasted for multiple laps worried trainers and technical personals.I noticed how frustrated coaches of Amore Vita, our very own former bike hero Yonas Zekarias (aka Halabay) for Salina and 2015 Numa Award winner for best trainer Samson Solomon of Eritrean National team were, dashing their cars through the roads to look for a spot and get out of their cars as to encourage their riders.
Finally after the 6th lap the time gap decreased to 00: 01: 55 on the seventh, 00: 00: 20 on the eighth lap and 00: 01: 17 on the tenth lap. Quite some animated speed for a circuit of almost 11km!
The peloton got stretched with riders reaching the leading group with stored energy. Tesfom Okbamariam, of the Eritrean National team, finished first, followed by Yonatan Hailu of Salina, Meron Teshome of Bike Aid and Eugenio Bani of Amore Vita.
As to per the tour’s cataloguing a white jersey for ‘best under 23 rider’ for Yonatan Hailu, a blue jersey for Eugenio Bani of team Amore Vita for ‘Best foreign rider of the Day’ and a yellow jersey for first place holder Tesfom Okbamariam. 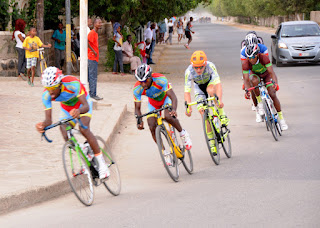 The tour moved to the region of Gash Barka passing by the region of Anseba on Monday 18th. The city of Keren welcomed partakers with fresh light air breathing away the heat. Keren is beautifully decorated with festoons depicting the event. Yesterday Tour of Eritrea commenced on 112km BarentuTesseney Challenge with the victory of the Eritrean rider Yonatan Hailu from Team Salina. Reports of the next stages will be covered on our next issue.