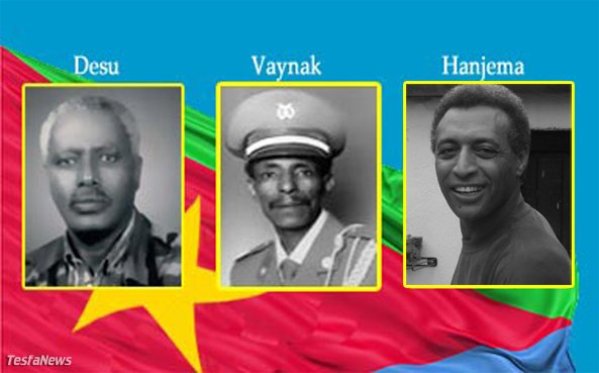 The veteran freedom fighters passed away in a car accident last Thursday at Ab-Dirbabu area along Massawa-Mahmimt road while they were travelling to take part in the 30th anniversary celebrations of the demise of Wiqaw Iz.

Eritrea is mourning the shocking death of two of the country’s most decorated and highly accomplished veteran fighters, Brigadier General Amanuel Haile “Hanjema” and Brigadier General Mebrahtu Tekleab “Vaynak” who were killed yesterday in a fatal car accident on the road to Mahminet.
Vetran fighter and former head and financial manager of Red Sea Trading Corporation Mr. Desu Tesfatsion is also killed by the accident.
The three gallant officers were en route to participate on the three-day pilgrimage to Mahminet to commemorate the 30th anniversary of the Eritrean People Liberation Front’s (EPLF) victory over the Ethiopian “Wukaw Command” (wukaw iz) of 1984.
Birg. General Amanuel “Hanjema” and Birg. General Mebrahtu “Vaynak” were both commanding officers during the 1984 operation on the North Eastern Sahel front that decimates the huge Ethiopian colonial army of the “Wukaw Command”.
With the death of the army’s Chief of Staff Maj. General Gherezgiher Andemariam “Wuchu” earlier this month, the death of these two selfless Generals will be indeed a great loss to the government and the people of Eritrea.
Birg. General “Hanjema’s” last appointment was as Zonal chief of staff and deputy to the late Major General “Wuchu” in the Dankalia zone. Birg. General “Vaynak’s” last appointment was as Inspector General of the army.
People and Government of Eritrea are in a mass outpouring of grief.
Eritrea’s history lives in the history of each of these heroes who sacrificed their lives for the liberation of Eritrea and those who are standing tall, in defending her sovereignty and territorial integrity.
May Eritrea’s beloved martyrs rest in peace.