Home Eritrea Eritrea: The First American man to win the Boston Marathon in 31... 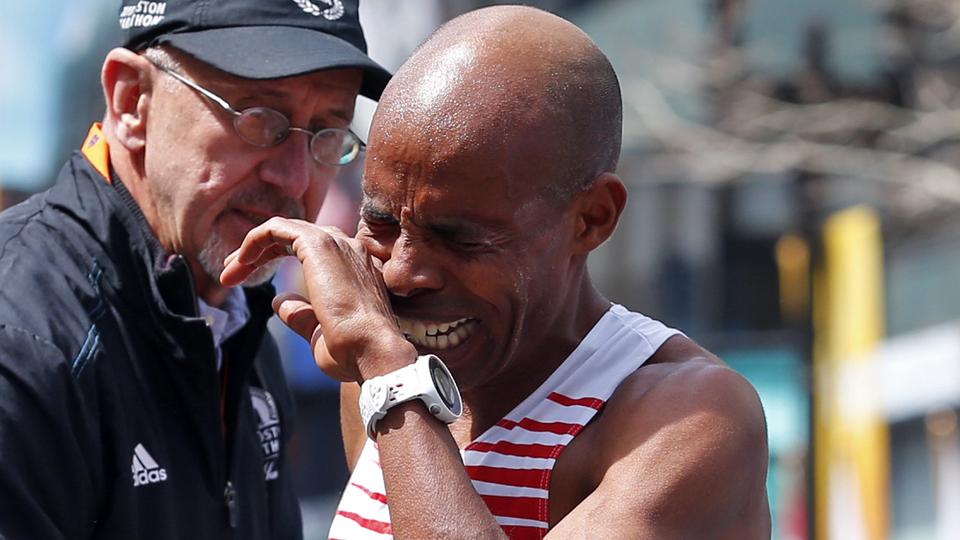 Djibouti (HAN) April 22, 2014 – By: Nate Boroyan (City News Writer) –American success story – The Eritrean American Diaspora Mr. Meb Keflezighi became the first American man to win the Boston Marathon in 31 years. Though his 2014 Boston Marathon performance marked one of the great American sports moments in recent memory, his triumph was celebrated some 6,500 miles away, in Keflezighi’s native Eritrea, a small African country on the border of Ethiopia.

With a time of 2:08.37, Keflezighi, became the first American man to win the Boston Marathon since Greg Meyer, who accomplished the feat in 1983 with a time of 2:09 flat.

“I wanted to win it for Boston … win it for the people,” Keflezighi said after the finish. “The last three to four miles, (the crowd) pushed me through it. I’m so lucky to be the champion.”

“It’s not about me,” he continued. “It’s Boston Strong. Meb Strong.”

The 2013 bombing “probably resonated more with Meb than any other runner in the field,” said Patrick, recalling a story about Keflezighi’s childhood in war-torn Eritrea.

“He was born in Eritrea when it was at war with Ethiopia, and one of his earliest memories as a young child was having to help clean up the debris of human flesh of a young boy who was playing with a bomb when it exploded,” Patrick said. “That’s why he was so emotional last year at the race, because he saw this whole thing coming back. It was like you almost can’t escape violence and these senseless killings.”

Boston marathon Dreams Come True: Meb Keflezighi, the Eritrean refugee whose longshot Boston Marathon win made him the first American to take the men’s title since 1983, was “the perfect guy to win this race,” the co-author of his autobiography told the Herald.

“It’s a great win because it’s such an example of hope. Here’s a guy who is winning races at an age most people think he should be retired. He’s setting PRs (personal records) as he ages. And he’s an American finally ending this incredible drought in Boston the year after the bombings,” said Dick Patrick, a longtime USA Today track-and-field reporter who wrote “Run to Overcome” with Keflezighi in 2010. “This is almost like winning five Bostons, there was so much emotion and symbolism in this year’s race, and for Meb to win it, it’s just incredible.”

Keflezighi, 38, who came to the United States at age 12, crossed the finish line at 2:08:37, weeping and kissing the ground, draping himself in the American flag and saying, “God bless America.”