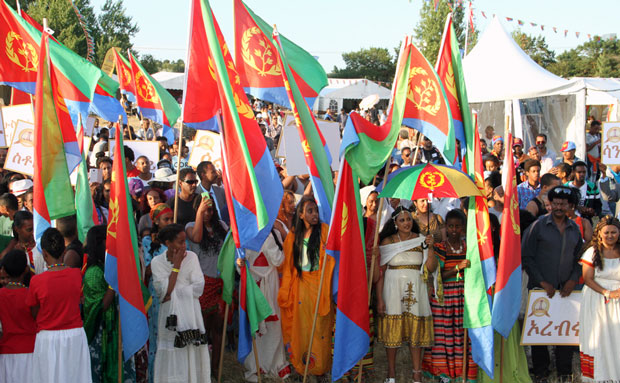 The annual event is being conducted under the theme “Festival: The Foundation of Unity and Diversity”.

Present at the opening ceremony were Government and PFDJ officials, heads of National Unions and members of the Diplomatic Corp. The President observed the different sections of the Festival during which he received briefings.

In the course of the Festival that will continue until the 14th of August, a number of displays highlighting the nation’s natural and cultural resources, pavilions that reflect our cultural diversity, artistic performances, creative works and innovations as well as exhibitions of different products would be featured.

In connection with the launching of the Festival, cultural performances including music and dramas were staged at Cinema  Roma on August 5.

A number of participants of the Festival from inside the country and abroad indicated that it creates a platform for appreciating Eritrea’s cultural diversity and history and
thus transfer Eritrean values to future generations.

Also in related news, the mining companies operating in Eritrea are displaying their activities at Eritrea Festival 2016.

The Head of Zara Mining Company, Mr. Yosief Taddese stated that before beginning production, the company has been engaged for 14 years in exploration activities and for 2 years putting in place the necessary infrastructure.

He further indicated that the company equipped with international standard equipment has begun production as of February 2015.

Meanwhile, visitors to the Festival said that the different artistic exhibitions depict the identity and culture of the Eritrean people which has added color to the national gathering.

In another report, women nationals who are displaying products of artifacts organized by the National Union of Eritrean Youth and Students (NUEYS) branch in the Central region said that the materials for their products are all obtained form inside the country.