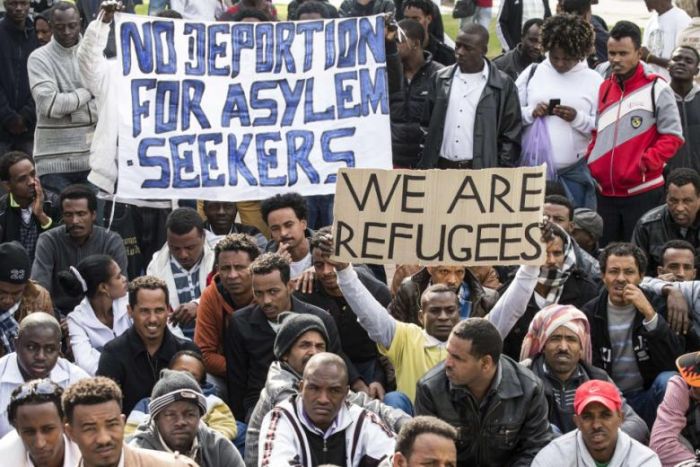 ASMARA (HAN) January 28, 2016 – Public Diplomacy and Regional Stability Initiatives News. Some say spies have infiltrated the community in Israel, instilling fear in those who have fled the country.

Has Asmara’s authoritarian government infiltrated spies among the 34,000 Eritrean refugees in Israel?

Some members of the community are convinced it has, and is using them to watch, listen and report back to the regime.

It’s impossible to say how many spies there are – obviously, no one will admit to being an informer for the regime. But, say people in the know, there is no doubt that they do exist.

“The Eritrean embassies and consular services do have supporters, outside Eritrea; they also infiltrate agents among the refugees and asylum seekers,” says Elyzabeth Chyrum of Human Rights Concern Eritrea.

This, she told i24news, “has been a practice for a long time.”

The alleged spies work for Eritrea’s ruling party, The People’s Front for Democracy and Justice. Their mission, opponents say, is to instill fear in, and impose silence on, those who have fled a country which the international media calls the North Korea of Africa.

Eritreans who left the country know that if they say anything against the regime, their families back home can be punished.

“So many Eritreans are so terrified to speak about what they really went through when they were in Eritrea, so that’s what it is, the regime still wants to control every Eritrean in Diaspora,” says Chyrum.

It’s not just informers who help the regime control those citizens outside its borders.

Eritreans in Israel have to pay their embassy a two-percent monthly tax from their salaries, and on all their earnings since leaving their homeland. Many claim that if they don’t pay the tax, their families back in Eritrea will suffer the consequences.

“Whenever an Eritrean goes to the embassy in Israel, he needs to pay the two-percent tax, sometimes it’s more, in order to get what he needs and in order to get his rights. He will have to pay what the embassy asks,” one Eritrean political dissident told i24news, asking not to be named for fear of reprisals against his family back home.

The regime benefits from the remittances of its nationals abroad, which are believed to account for at least 32% of Eritrea’s Gross Domestic Product, and continues to grow as approximately 5,000 Eritrean leave the country every month.

And even after paying taxes owed since the day he left Eritrea, anyone needing a passport in order to continue his refugee journey will have to pay the embassy an “exorbitant” price in order to receive one, says the dissent.

But getting hold of a passport, expensive as it may be, is not that simple. Anyone applying has to go through The People’s Front for Democracy and Justice, Eritrea’s ruling party, which has representatives among the exile communities. The PFDJ decides who can and cannot approach the embassy, often demanding what may best be described as a financial incentive to accede to the request.

“If you are part of the opposition here, if you participate in demonstrations, they block you in the early stage, they even have videos, so whenever you go there, they block you automatically and inform the embassy about you,” the Eritrean refugee says.

The regime’s activities against its exiles have not gone unnoticed. A December 2011 UN Security Council resolution called on Eritrea to “cease using extortion, threats of violence, fraud and other pressure tactics to collect taxes outside of Eritrea from its nationals.”

The same resolution accused the country of using the tax to destabilize the Horn of Africa, claiming some of the revenue was being funneled to armed groups in the region, including the Somali militant group al-Shabaab. This prompted the Security Council to impose an arms embargo on Eritrea.

Eritrean refugees in Israel believe Jerusalem should take action against agents of the Asmara government, as other countries have done.

The Eritrean ambassador in the British capital, for example, was informed in 2011 that the collection of the tax could be unlawful, and in contravention to the Vienna Convention on Diplomatic Relations. The ambassador was instructed to stop collecting the tax. But a special investigation carried out two years later revealed that the tax collection continues.