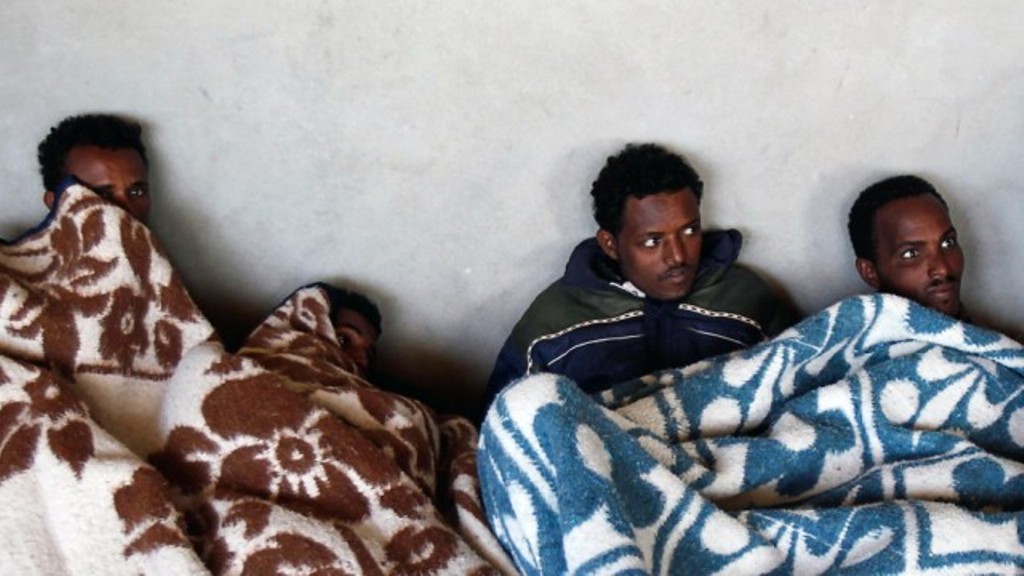 Cairo (HAN) August 23, 2014 – Humanitarian and Refugee issues. The Egyptian Sinai Peninsula criminals have kidnapped tens of thousands of refugees to ransom. Eritrean refugees are being held captive and enslaved in Egyptian Sinai Desert. Eritrean Children, women and men are shackled in chains for many months with minimal to no food or sustenance.

Eritrean refugees in Sinai desert  are barely kept alive until their family overseas are willing to pay their ransom. Eritreans, whose diaspora family are not able to provide the ransom payment are subjected to torture and their organs harvested while being subdued for illigal organ trade in Egypt and left for dead in the desert. Eritrean Women and young girls are being gang-raped. Some of these women have felt it intolerable to keep living and have chosen to commit suicide.
By Beyene Weldegiorgis with SBS has recorded this opinion interview with  Samson Habtemariam

Samson Habtemariam eventually found himself in the Sinai Desert in neighbouring Egypt, along with other victims of a human-trafficking and organ-harvesting operation. Speaking in the Tigrinya language, Habtemariam told SBS how tribal leaders ordered them all to pay a ransom of more than $30,000 or they would lose their kidneys.

Samson Habtemariam: “Then all of us decided to die, as there was not any way to save our lives. Some three or four people were dying every day.”

He said he and the others were held in a house where their kidneys were removed.

“These bodies were the people who died after their kidneys have been taken. After the operation, they dump the body in that house. There were bodies that were thrown outside as well.”

Samson Habtemariam says he was imprisoned for six months, with his family unable to raise the ransom.

Then one night, he and others in the camp staged a mass breakout.

“Thirty-five of us were tied (together). If one of your hands is free, the other one is tied with another leg.”

“You cannot run, but we ran by rolling on the ground. Then, they started to shoot at us. From the 35 people, most of them were killed. Two of them entered Israel on the same night. Nine of us were hiding in bushes. In total, 11 people escaped.”

He says he initially found refuge in a mosque, before travelling to Cairo and then being resettled in Australia by the United Nations relief agency, the UNHCR.

Human trafficking and organ trade is rife
The director of Human Rights Concern Eritrea, Elsa Chyrum, said Mr Habtemariam’s case is definitely not an isolated one.

“Many like him who fled persecution in their own country were kidnapped at the Eritrean and Sudanese border and sold and resold by traffickers to the highest bidders and, from there, taken to the Sinai Desert,” she said.

“There, they were subjected to torture, rape, chained and beaten, and also demanded to pay ransoms up to $45,000 per person. We have interviewed many people who were asked to pay between $30,000 and $45,000. So for the traffickers, it becomes an income-generating business.”

“The worst is when their mind and soul is wounded.”
Sister Azezet Kidane, also known as Sister Aziza, is an Eritrean-born Catholic nun who works as a volunteer with Physicians for Human Rights Israel.

She has interviewed well over a thousand refugees who have suffered kidnapping, torture, rape and forced labour while passing through the Sinai.

At a conference in the Vatican, she described some of the injuries those refugees had suffered.

“I have met people with deep wounds with chains. I met people who became blinded because, for six months, eight months, they were blindfolded, and, when they take them out to the sun, they lose their sight. The worst is when their mind and soul is wounded.”

International groups are monitoring the situation

Various international organisations, including the United Nations, have reported thousands of refugees fall victim to people traffickers and organ harvesters in the Sinai.

Ethiopia’s honorary consul to Australia, Graham Romans, cites a recent report to the European Commission finding up to 30-thousand people trafficked over five years and said most were from Eritrea.

“Most of those who are trafficked have died in captivity, even after ransoms have been paid,” he said.

“It’s estimated that some $US600 million has been paid out in ransoms, and the report suggests that many Eritreans do not survive the trafficking and torture.”

“Most of those who are trafficked have died in captivity, even after ransoms have been paid.”

“And (it’s) calculated between 5000 and 10000 hostages have died or been killed in captivity, with children as young as two or three years (old) among the victims.”

Samson Habtemariam believes most of the people who detained him in the Sinai were Egyptian.

“They were Egyptians – they spoke Arabic – but I can say there were Israelis as well,” he said.

“There were times to see special soldiers who spoke good English. Though they didn’t speak much in front of us, sometimes they came and asked us when are we going to pay the money. But the guards were Egyptians and Palestinians.”

He also believes those removing the organs had medical training.

“Those people are experts, they are doctors.”

“They let the victim lay on a bed. The operators wear appropriate medical dress. They use anaesthesia.”

“After they take the kidney from your body…. they send the kidney to the neighbouring countries. It won’t go back to Egypt. Special cars come to the place. They use instruments just like what they use in hospitals. Those people are experts, they are doctors.”

Saleh Johar is an Eritrean activist who has written a book about Eritrean victims of the people smugglers.

He believes the organs are placed in cooled containers and taken by road to Cairo, or across the border into Israel, then flown to countries where recipients are waiting.

“The kidney cannot stay for more than 48 hours. So to transport it to Europe, Australia or America, you need airplanes,” he said.

“The closest airports are in Israel and Egypt. From this argument, if one wants to transport a kidney, it should be through Egypt or Israel.”
Egypt is a major destination and transit country for Eritrean asylum seekers. At the beginning of this year, the country held about a quarter of a million people from Eritrea, Ethiopia, Somalia, Sudan, Syria and Iraq.