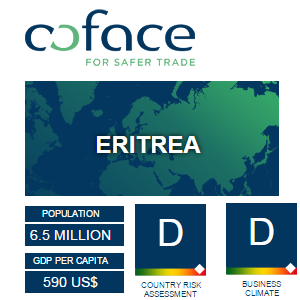 Growth dependent on the mining sector

After rising in 2014, thanks to the momentum of public consumption and investment in the mining sector, growth slowed in 2015 because of a temporary halt to copper production, when the Bisha mine had to deal with technical problems and fuel shortages. This mine is currently the State’s chief source of income (via taxes and its 40% holding), with copper, moreover, the country’s leading export item (30% of total sales abroad in 2014), ahead of seafood products. Private consumption, although it is able to draw a degree of support from remittances by the diaspora, remains dependent on weather conditions, as 70% of the economically active population derive their main income from agriculture and livestock farming.

The mining sector, which is developing in a context of new joint-ventures bringing together the country’s state mining company and mostly Chinese companies, is expected to continue to lead growth in future years. However, this will remain below potential, because of poor government management, diversion of resources to the military and a lack of investment outside the mining sector. Economic development is hampered by a very difficult business climate (the country is in last place in the World Bank’s Doing Business rankings).

The exploitation of the Koka gold mine is due to start by the end of 2015 and the Bisha mine should be in a position to produce zinc from the second half of 2016. Production at the Asmara copper-zinc-gold and silver mine is expected to start during 2016. This major project will consolidate China’s position (the mine will now be operated, in co-operation with the public operator, by a public Chinese company, and no longer by a Canadian group) as the country’s leading investor, creditor and trading partner. It will allow the government to reduce its reliance on income from the Bisha mine. Finally, the construction phase of the Colluli potash mining project is due to begin in 2016, with output scheduled to start in 2018 at the earliest.

Infrastructure projects, in which Chinese companies are involved, are also underway (rehabilitation of the electric power plant at Hirgigo and expansion of the port of Massawa).

Inflation will remain high because part of the public deficit is financed through money creation. Lower global food and oil prices in 2015 had a positive but limited impact on local price movements. This inflation, exacerbated by a shortage of foreign currency, is responsible for the over-valuation of the nakfa, which is pegged to the US dollar.

The military budget is a drain on public expenditure, with public revenues developing according to mining output and prices. The public debt is at a worrying level, especially as difficult relations with donors prevent the country from benefitting from the debt relief to which it could potentially be entitled under the HIPC initiative (external debt is however limited compared with the debt of domestic origin).

With regard to the external accounts, exports of copper and zinc are expected to rise in 2016 as output increases. Moreover, base metal prices are expected to more or less stabilise following the fall recorded in recent years. Nonetheless, demand from China (largest client, ahead of India) is on a downward trend. Furthermore, investments in the mining sector are expected to lead to an increase in imports of capital goods and services and the impact of the fall in the oil bill is likely to lessen. The current account balance is expected to worsen, especially as the sanctions imposed by the United Nations will continue to put pressure on expatriate remittances.

President Issayas Afeworki, who has led the country since 1993, and the country’s single party hold all the reins of power. The regime has abolished most freedoms and the human rights situation is worrying. In 2014, Eritrea was the fifth largest source of refugees in the world (4.5% of the population). Many of them are trying to escape permanent military service introduced since the war with Ethiopia (1998-2000).

Eritrea’s relations with most of the international community remain tense, as demonstrated by the extension of United Nations sanctions into 2016 (the country is, in particular, suspected of supporting armed groups such as Al Shabaab in Somalia and Ethiopian rebel movements). However, the EU continues to provide financial aid and relations with China remain solid.