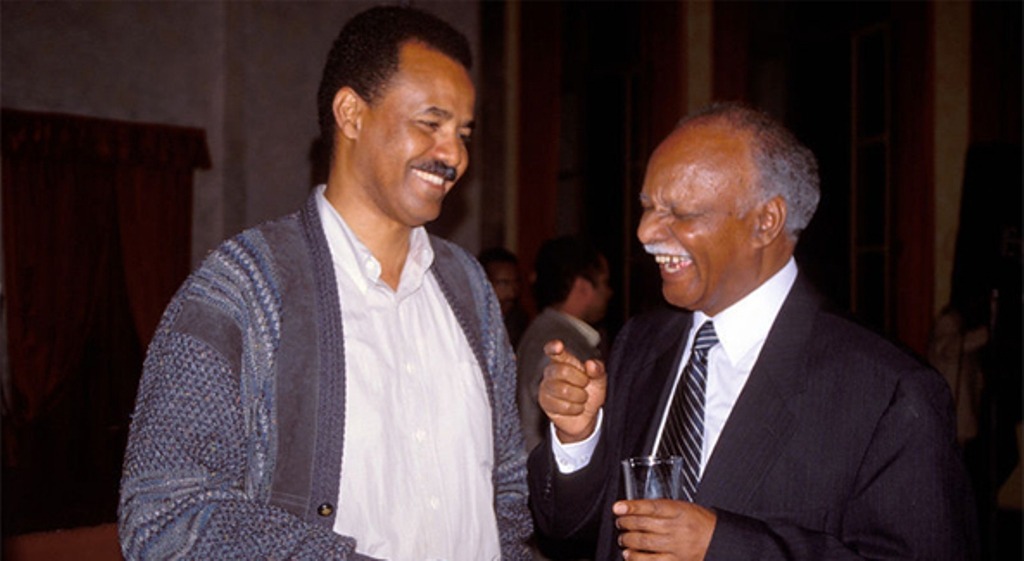 The Legitimacy of Eritrean Constitutional Change: Rethinking the Amendment Process. The conventional view of article 5, 8, 9, 10, 30 and 31 is that it leaves the task of resolving amendment process issues entirely to the people.

The issue of governing devices imposed by the PFDJ has always magnified the difference between the grand camp of the Eritrean opposition. However, those devices and proclamations stir little debate except when the ruling party leader Isaias Afwerki takes a decision concerning those devices; the debates mostly start as a reaction to what the ruling party does.

In recent history of African Constitution, the signing of the Constitutional certification has become a ceremonial function attended by various dignitaries in Africa and allies, which may include the President of the State, such as Eritrea.

Mahmud Saleh, partcipated “A Constitution or The Constitution?” debate published by the assessment of the ongoing debate at Awate Forum. Geeska Afrika Online selected Salehs view to publish globally and share with Eritrean Community and International constitutional law experts Worldwide.

I (Mahmud Saleh)  have taken some minutes to gloss over the constitution. I am an average reader, not an expert at all. First I will log where I see amendments may be needed, and then I will ask both groups some questions related to the debate.

1. Article one (5) states Eritrea is a unitary government. Although it allows “The powers and duties of these units shall be determined by law”, it doesn’t spell out if this sub-units are merely administrative (extensions of the executive branch) or an autonomous entities or regions with meaningful powers devolved to them, including legislative powers. Emma has been pushing for a DUG, I see the advantage of Amanuel’s argument. There are also other competing ideas, such as federalism. The bottom line is: this article needs revision under a democratic environment with all stakeholders given equal opportunity. My position was using the 1997 constitution as a tool, and amending it using its embedded provision (article 59) once an accommodating political climate settles in the country . But I understand for the need of a creative thinking, and revolutionary ideas in making the structure of the government reflecting our diversity.
2. Article 4 in its entirety.
3. Article Article 8 (3) all land, water, air and resources shall be managed by the state..

I come from an agro-pastoral region, and spent my entire life in rural Eritrea, particularly the lowlands. I am also fortunate to know our Kebesa people and their way of life. I see the need for a dialogue regarding the concept of land. In lowlands, the mode of production makes land communal, they see it in terms of mobility, postural life. Therefore treating it the same way Kabasa treat land (strictly managed farming plots) is erroneous. What we see in the past 23 years is the insatiable appetite of the government to confiscate tribal land, take away the fertile of it and distribute it among its supporters (mind you, I am not talking about poor Kabassa farmers, they have the right to move freely as they have done it for centuries; I am talking about the few suckers who have accumulated wealth at the expense of our people), and business interests leaving poor communities out of postural lands and drinkable water sources. There should be a system that comprises reserved community land and state owned sectors.

4. Article 9 (1) “The State shall be responsible for creating and promoting conditions conducive for developing a national culture capable of expressing national identity, unity and progress of the Eritrean people.”

These reminds me of projects like the students summer camps; sending high school kids to Sawa, and to some extent the project of National service. PFDJ has done everything to mold Eritreans into one culture. It has not created a culture, but it has been able to destroy the social fabrics of our people. Today the ideas of parent-child, husband-wife, family, church, mosque, community have been reduced to militarized society. The workforce of villages has been wiped out. The bearers of our culture (mothers) have been widowed and traumatized. Instead of having colorful and vibrant diversity, we have shaky and confused unity. The state needs to get out of creating or destroying cultures. Eritrea will remain to be the mother of multiple cultures, given equal opportunity, it will make a generally accepted culture which will be expressive of its demographic reality through market and peaceful interaction.

5. Article 10(2)” Courts shall work under a judicial system that …be understood by and is accessible to all the people.”

The language factor is important here. There were many cases, while I was there, where people would come from lowlands to the high court in Asmara, and then, they were made to translate their papers on their own expenses. Which takes us to the language clause. If all languages are equal then they should be served in the government equally too. Citizens should not burden discriminatory excessive brunt just because they don’t speak the administrative language. The history of languages in EPLF has a long story; we may better do it in a separate occasion.

Administrative and legislative districts will define how democratic this is. If the legislative districted are mapped out in a way that skew this towards the majority social group, then smaller ones will not have power. They may want to create coalitions; anyway, this is one part I think needs to be revised.

7. Article 32 (8) “gives the national assembly the authority to elect the president”

This is at the core of the philosophical debate; it’s also related to article I.

8. 1.
Article 32(10) “The National Assembly shall have the power to approve an appointment pursuant to this Constitution.”

Too weak, it should spell out what level of government positions should be approved by it
and what levels should be left for the executive. Article 42 (7) should have
been expanded here; it reads…[…]… Court and any other person or persons who are required
by any other provisions of this Constitution or other laws to be appointed by
the President;” There are some positions mentioned that needs legislative approval, but this clause leaves open for the president many other high level positions that should be approved by the legislature.

9. Article33 stipulates that the national council approves drafted laws and send them to the president. Very vague/week; what if the president declines?

Both the president and the chairperson of the national council, a person who is the
designated next in line in case the president is thrown out of office or is
incapacitated, will inevitably be from the same bloc or party, which will create
less power of check and balance, Since both are elected by absolute majority from the NC.

This means in a legislative system where the president and the chairperson are elected by
by absolute majority (THEY WILL LIKELY BE FROM THE SAME PARTY OR RULING COALITION), it’s possible they could at any time convene a simple majority and pass laws which leads to majority dictatorship.

12. Article 42 (11) appoints high ranking officers of the armed forces.
Legislature needs to get involved on some of these. chief-of-staffs, police commissioners, custom…high
ranking officers eg. Generals (and their numbers.)

13. Article 42 (13)legislature should be involved.
The above is meant to see where areas of amendment are sought. This not to promote my position. It’s meant to get the debate to substance. I do see both sides having legitimate points. My intention is on finding which way is more galvanizing. I see the benefit of the document (1997 constitution) as having a rallying effects. At the same time, I also see it’s frankly, a document that needs to be overhauled. Either way, at the end, there will be a new constitution which reflects Eritrean society and its diverse political stakeholders. Continue Part II …..