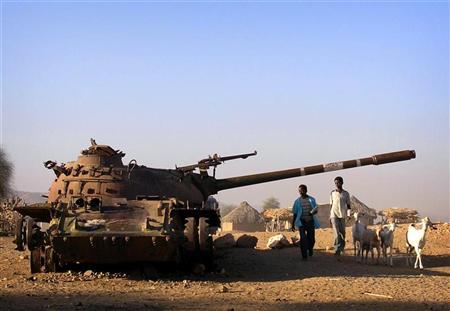 ADDIS ABABA (HAN) June 5.2016. Public Diplomacy & Regional Security News. By Girma Feyissa. Given the 15 years of United Nations sanctions and Eritrea being one of the largest sources of migrating people in the world, I wonder if there is a good cause to celebrate that country’s 25th anniversary of independence. If we go by history books, even before the scramble for land in Africa by the main colonial powers during the 19th Century, the state of the relationship between Eritrea and Ethiopia was volatile.

The colonial ambition of Italy had been normalised by the gallant Ethiopian warriors led by Emperor Menelik II in a bloody battle fought at Adwa over 100 years ago. But the thirst for blood was not quenched yet.

The war was initiated by the Italians who breached the peace treaty signed at Wuchale by misconstruing the Amharic version rendering the Italian version to mean that Ethiopia was a colony. This deceptive article was soon discovered and rejected. That led the two parties to an all-out war in which thousands of Ethiopian freedom fighters and patriots were killed.

The Italians came back again after 40 years of preparation. They took a large part of the country, albeit under constant fight with Ethiopian warriors. Emperor Haile Selassie went into exile and fought a sustained diplomatic struggle that enabled Ethiopia’s voice to be heard in the League of Nations.

The sustained struggle made victory a reality, and Ethiopia emerged as an independent nation once again. It transpired, in the long run, that Eritreans were never willing to remain under the yoke of colonialism. The United Nations had to intervene to bring peace by conducting a referendum. The result was clear. Eritrea was federated with its motherland and remained so until certain elements organised themselves into freedom fronts and supported by archrival parties, they fought for 30 years underground.

Twenty-five years ago, the Eritrean Peoples Liberation Front (EPLF) succeeded in seceding Eritrea from Ethiopia. Eritrean success came with the toppling of the rather bloody dictatorship, the Dergue, in Ethiopia by the TPLF-led rebel forces. But the friendly relations of the two forces did not last long. They continued for only two years after each came to power.

War was known as the meaningless sacrifice. The Ethio-Eritrea war was deadly and came to a stop after two years. Ever since, a no war, no peace deadlock remains. Children born in post-war years have now come of age living to the tune of only memories of the avoidable conflict. If only logic and common sense on the part of the leaders of the two fighting parties had won the day, thousands of lives on both sides could have been saved, not to speak of the amount of and value of property lost in vain.

The two countries are not only neighbours by virtue of their geographic locations alone. Nor are they belligerents because of the fate of the battle of yesteryear. The two countries have deep-rooted features that unite them rather than separate them.

I ask myself and wonder what does not speak for this relationship out of religion, culture, colour, language or history. I am sure none of these factors or identity marks can distinguish an Ethiopian from an Eritrean.

Among the points raised by experts, culture and attitudes to each other are debated for lack of better points on which to reflect. On these issues, I, for one, can show up on the witness stand. I had visited Eritrea twice, before and after separation. On both occasions, I would be telling lies if I said I did not feel the slightest difference on either occasion, because, after all that ravaging war I was received warmly and with even more friendliness during my post-war visit than any time before. I cross my fingers about that fact.

Everywhere we went, Amharic records were being played not because every bar and bordello owner was aware of our presence but it was simply about their passion for the music. As for the culinary and beverage offerings, one could cross over to “Geza Abashawel” or the Eritrean version of a typical slum and enjoy tej and raw meat, sliced the traditional style. Asmara’s drainage system is so well-designed that even Addis Abeba has not achieved this feat so far, despite the double digit growth rate. Not to be sarcastic, that figure means nothing at all, in terms of the quality of human life, especially without comparison to previous years and the same terms of reference.

The jubilation and excitement that overwhelmed Asmara during its independence day has never been expressed anywhere else in Africa, never mind in Ethiopia. But the silver lining of joy did not last long enough to match the resilience and endurance of the 30-year long fight. It vanished soon enough and disappeared into thin air. The honeymoon period of the leaders of the former freedom fronts sublimed and their friendship weathered away. Badime, a small peninsula-like junction, was alleged to be the dispute over which the deadly war was triggered.

Young volunteers from as far west as Gambella to the south of Gamo Gofa and other places came over to fight for the defense of their motherland – Ethiopia. The war cost the two countries over 70,000 lives. Each side claimed it owned the area. A United Nations Commission’s verdict was otherwise. Now a stalemate of no war, no peace prevails.

Looking back a what was achieved in the past 25 years, we find out that there are a lot of defects in Eritrea that have foiled the hopes and aspirations of independence expected after that jubilation. So far Eritrea has not drafted its needed constitution, although it will mean nothing more than a document unless it is put into use. There is no free press in Eritrea, as there is in neighbouring states. Torture of imprisoned reporters is rampant, according to humanitarian reports of super powers.

Access to the Red Sea is not a matter to be sidelined for Ethiopia. We are now depending totally on little Djibouti with its administration run from the United Arab Emirates. This has also led to putting under Ethiopia’s grip. It is anybody guess what that means.