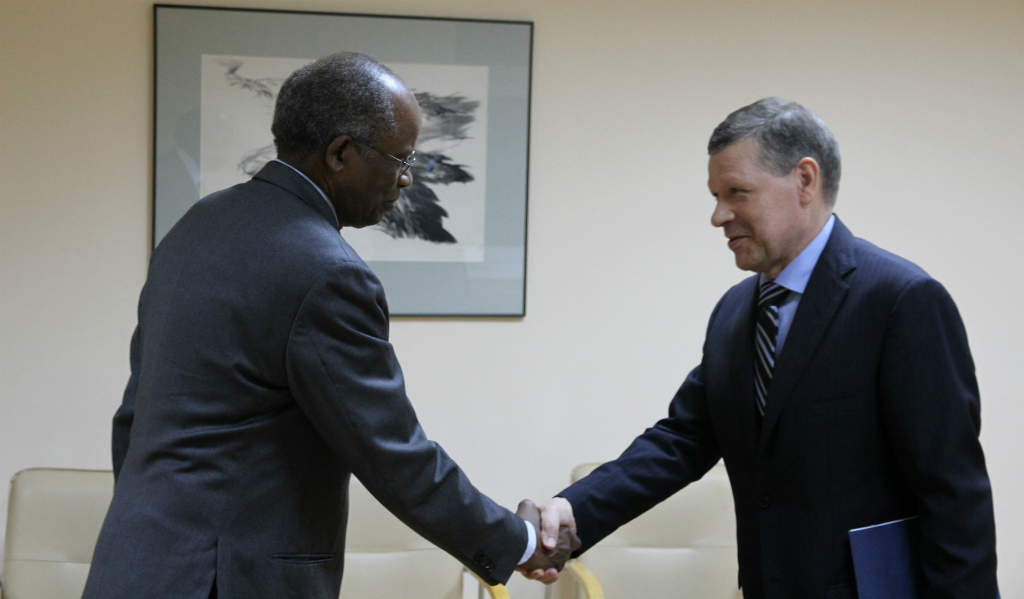 Belarus opposition leader Svetlana Tikhanovskaya demanded on Friday an international mission to document what she called “atrocities” during crackdowns on anti-government protests but said she was ready to talk to end weeks of violence.

She addressed a highly charged debate on the Belarus crisis at the United Nations Human Rights Council, where envoys from Minsk and its backer Moscow faced off against EU delegations who are pushing for sanctions and investigations.

UN rights investigator Anais Marin told the session that member states needed to act to prevent a major geopolitical rift. “Let’s not allow another Iron Curtain to descend on the European continent,” she said.

Marin said more than 10,000 people have been “abusively arrested,” with more than 500 reports of torture and thousands “savagely beaten,” since President Alexander Lukashenko retained power after a disputed presidential election on Aug. 9. 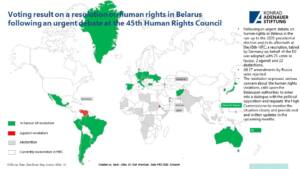 Protesters say the vote was fraudulent. Lukashenko says he won the vote fairly by a landslide and dismisses accusations of abuses, which he says are part of a Western smear campaign.

Marin’s speech was interrupted several times by objections from other UN members including Russian, Belarusian and other delegations who called a halt to her participation.

The council agreed — with 23 votes in favour, 22 abstentions and Venezuela and Eritrea against — to give the office of UN rights boss Michelle Bachelet a mandate to monitor the situation in Belarus and submit an oral report with recommendations by the end of the year.

The Belarus Foreign Ministry described the vote as a “dangerous precedent” and accused the council of meddling in its internal affairs.

Tikhanovskaya, in a video message to the 47-member state forum, called for the monitoring mission and said the government should hold another election.

“I once again emphasize our willingness to talk with the authorities and look for peaceful solution to the crisis that has affected our nation,” added Tikhanovskaya.

“We demand to immediately cease violence against peaceful citizens. We demand immediate release of all political prisoners,” she said.

Lukashenko won a sixth term with 80 per cent of the vote in an election without international monitors. The result has been seen as implausible given the crowds Tikhanovskaya was drawing during the campaign.

Tikhanovskaya, 37, fled to Lithuania after the election. A political novice, she emerged as the consensus opposition candidate after better-known figures were barred from standing, including her jailed activist husband.

Tikhanovskaya is a leader of the opposition Coordination Council. In Belarus, another member of the group, politician Maxim Znak, declared a hunger strike in jail on Friday after being charged with calling for actions that could harm Belarusian national interests, the council said.

Russian President Vladimir Putin, Lukashenko’s main ally, agreed to loan Belarus $1.5 billion US at a summit on Monday, and the two countries are conducting joint military training exercises in Belarus.

Russia’s defence ministry said on Friday that special forces from Russia and Belarus had rehearsed a counterterrorism scenario involving freeing hostages from a building in their “Slavic Brotherhood 2020” drills.

It said more than 800 military personnel from the two countries were taking part in the training near the Belarusian city of Brest.

During the UN debate, Ukraine’s foreign minister warned Russia against taking steps that may undermine the sovereignty of Belarus and destabilize the region.

“It is heartbreaking to watch the footage of our close neighbours viciously beaten down and arbitrarily detained on the streets of their native cities,” Dmytro Kuleba told the debate.

On Thursday, the European Parliament voted in a non-binding measure to not recognize the election or Lukashenko’s legitimacy as president when his term expires on Nov. 5. The European Union could follow with formal sanctions.

As well on Thursday, 17 members of the Organization for Security and Cooperation in Europe (OSCE), including Canada, appointed an independent team of experts to investigate the alleged human rights abuse and elections fraud in Belarus.

Lukashenka’s only friends in the current UN Human Rights Council: Venezuela and Eritrea. Strong resolution on Belarus tabled by GermanyUNGeneva on behalf of the EU adopted! Oral update due later this year. Russia demanded 17 amendments. All rejected. 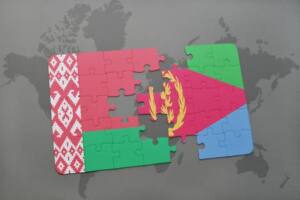 The council agreed — with 23 votes in favour, 22 abstentions and Venezuela and Eritrea against — to give the office of UN rights boss Michelle Bachelet a mandate to monitor the situation in Belarus and submit an oral report with recommendations by the end of the year.

Featured Image: On December 12, 2016 the Deputy Minister of Foreign Affairs of the Republic of Belarus, Valentin Rybakov, met with the Ambassador Extraordinary and Plenipotentiary of Eritrea to the Republic of Belarus non-resident, Petros Tseggai Asghedom, on the occasion of presentation of copies of the Credentials.