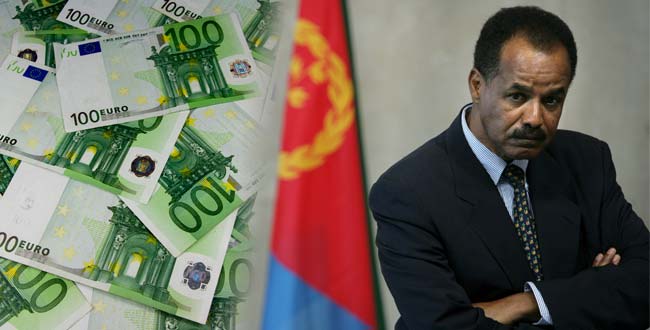 Djibouti (HAN) March 20, 2014 -By.Santilla Chingaipe-sbs- Members of Australia’s Eritrean community claim they are being forced to pay an illegal tax, which is being used to fund al-Shabaab.

The Eritran diaspora community Members in Australia claim they are being forced to pay a tax which has been banned by the United Nations. According to the federal government, if such a practice is occurring in Australia, it would be in breach of both UN sanctions and an Australian government directive.

Yassin Omer Mahmoud, the head of Consular Affairs at the Eritrean Consulate in Melbourne.

David (not his real name) who arrived in Australia as a skilled migrant in 2009, says he’s been forced to pay the 2 per cent tax since a visit to the Eritrean Consulate in Melbourne; the country’s only diplomatic presence in Australia. “They get to know you or catch you when you go to the consulate,” he says. He has shown SBS receipts that indicate the payments he’s made over the years to the consulate. David says he is taxed based on his earnings in Australia. He says he was asked to provide evidence of his income, such as pay slips and group certificate. David says he was unemployed when he first arrived and was asked to pay the minimum that can be taxed, which he claims is what they ask people on Centrelink benefits to pay.

He says failure to pay the tax has repercussions. “The problem is if I don’t pay two per cent, I’m not going to get any services either from the Consulate or the government,” he says.

David says this would make it difficult to travel back to Eritrea to visit close family members. Eritrea gained independence in 1993 and has been governed by the People’s Front for Democracy and Justice ever since.

The Eritrean government has been widely criticised by human rights groups such as Human Rights Watch and Amnesty International. Tens of thousands of its citizens have fled as refugees, with hundreds dying following a boat tragedy off Italy’s Lampedusa coast last year. Munir Abdulhai is the Australian spokesman for the opposition group, the Eritrean National Council for Democratic Change.  Mr Abdulhai also claims there are serious repercussions if the tax is not paid.

“They hold ransom or they hold someone back home, anybody who has a son, child or father, they are imprisoned. I know some people who have their relatives imprisoned,” he says. And he claims people are taxed even if they’re on Centrelink benefits. “You tell them I’m a pensioner; I have known some people who have paid this fund, 2 per cent, they tell them, even if you don’t have nothing, they tell them alright pay this. If they say my income is so low, or this or that, they will tell them as well,” Mr Abdulhai says. The tax collection was banned by the United Nations Security Council in 2011.

The Security Council accused the Eritrean government of undermining peace and reconciliation in the Horn of Africa, by providing support to armed groups such as al-Shabaab, an al-Qaeda affiliate. The Security Council called on all UN members, including Australia, to hold accountable, consistent with international law, any individuals acting on behalf of the Eritrean government who collect the diaspora tax. Eritrea’s top diplomat in Australia is Yassin Omer Mahmoud. Mr Mahmoud admits that the two per cent payment is sought from Eritreans in Australia.

“We don’t call it a tax, we call it recovery… and what’s happening is that this [tax] is a kind of gratitude towards the country, everyone will contribute towards building the country.”

Mr Mahmoud disputes the UN allegations against the Eritrean government. He also denies that the payments are compulsory. “Actually this is not a forced payment, it is voluntary, whenever they want any services maybe in Eritrea, that’s the time they will start paying and  there is no force for that. It’s voluntary.”

“Until it is officially (told) to us, I’m not going to comment on that.”

In May 2013, Canada’s Foreign Minister John Baird kicked out Eritrea’s consul in Toronto after he was accused of ignoring repeated warnings to stop imposing the diaspora tax. “I think declaring the Consul General persona non grata is a significant diplomatic step which underlines our significant concerns with the activities that were inconsistent with his diplomatic role.” Mr Baird said at the time. David, and other members of the Eritrean community in Australia, say they would like Julie Bishop to do the same. Ms Bishop’s statement says the Department of Foreign Affairs and Trade has asked federal, state and territory law enforcement authorities to inform it of any evidence that attempts have been made to collect the diaspora tax in Australia. She says the DFAT is not aware of this practice currently occurring.

Full statement from Foreign Affairs Minister
The Australian Government condemns any efforts by Eritrea to impose a tax on the Eritrean diaspora, whether in Australia or internationally, and particularly measures to collect such a tax by way of extortion, threats of violence, fraud and other illicit means. Such a tax is in clear violation of UN Security Council Resolution 2023 (2011).

In 2013, Australia co-sponsored a resolution of the UN Human Rights Council which strongly condemned “any violation by the Government of Eritrea of its international human rights obligations in the connection with the collection of taxes outside Eritrea from its nationals.

On 6 June 2011, Australia formally instructed the Eritrean Consulate to suspend collection of any such tax. While the Department of Foreign Affairs and Trade (DFAT) is not aware of this practice occurring currently within Australian jurisdiction, DFAT consults with Federal, State and Territory law enforcement agencies, the Attorney-General’s Department and the Department of Immigration and Citizenship on this issue and has requested these agencies to inform DFAT of any evidence that attempts have been made to collect the tax in Australian jurisdiction. DFAT also works closely with the Monitoring Group supporting the UN Security Council Somalia/Eritrea Sanctions Committee that investigates this issue. sources: sbs.com.au.

–
HAN & Geeska Afrika Online (1985-2014).  The oldest free independent Free Press in  the region, brings together top journalists from across the Horn of Africa. Including  Ethiopia, Somalia, Eritrea, Sudan, Djibouti, South Sudan, Uganda, Kenya, Oromo, Amhara,  Somali, Afar and Harari. Plus, we have daily translations from 150 major news organizations  in the Middle East and East African regions. Contact at news@geeskaafrika.com