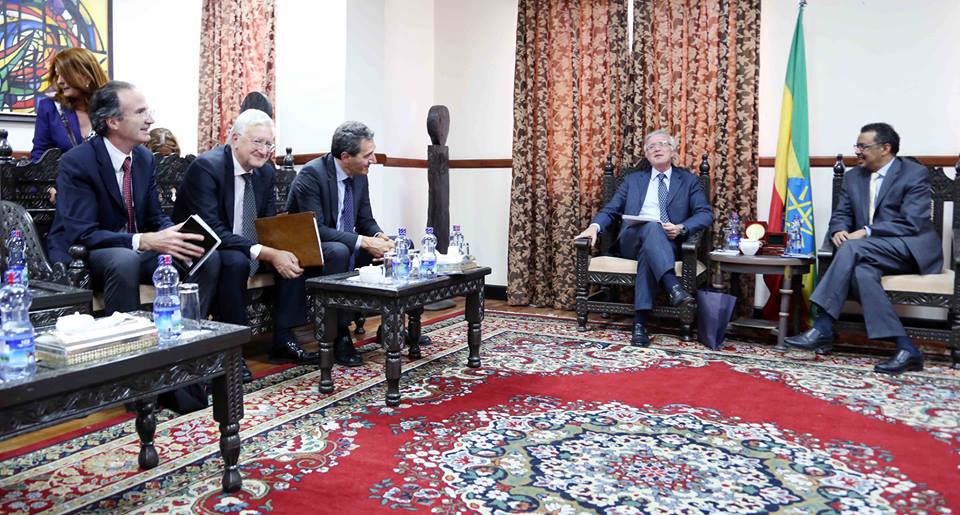 The visit follows a meeting between the two Foreign Ministers met in Milan last month and agreed to cooperate on the problems posed by migration. Ambassador del Panta, who congratulated Dr. Tedros on his re-appointment as Foreign Minister, said the Italian Government was very keen to work on migration issues with Ethiopia which, he described as a key transit country in East Africa.

Recalling the Trust Fund announced by the ‪‎EU to tackle migration and related issues, the Ambassador said, “We would like to be instrumental to channel the fund effectively to the region and especially to ‪Ethiopia.”

He said that the areas of cooperation could include support for Micro and Small Enterprises, access to credit for vulnerable groups; as well as job creation and training for women and youth. He said his Government expected Ethiopia to produce proposals to utilize the special financial scheme of the EU trust fund.

A technical committee would shortly be formed to follow-up suggestions. Dr. Tedros, who congratulated Italy for the success of the Milan Exposition, said Ethiopia was aware of the magnitude of the problem of migration for Europe. Ethiopia, as a transit center, and as a destination for migration in the Horn of Africa, welcomed any efforts to alleviate the problems of migration through assistance to migrants or in job creation.

The Minister noted that Ethiopia had created 2.6 million jobs last year, of which nearly 75% had been permanent. He said ‪#‎Italy could assist in giving training to the youth and helping to provide, entrepreneurial skills. He also noted Ethiopia was preparing legislation to minimize and prevent the activities of human traffickers and smugglers.

The Italian delegation is due to visit the camps set up in northern Ethiopia for Eritrean refugees who have fled from ‪Eritrea in recent years.