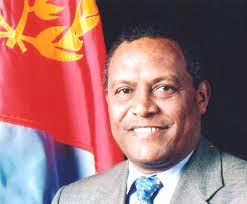 mony, Vice President Portela asserted that Eritrea-Cuban relations has been steadily growing.  She further expressed her country’s readiness to enhance existing ties of partnership with Eritrea in the Health and Agriculture sectors.

t and underlined Eritrea’s readiness to expand and consolidate further the bilateral ties between the two countries.

Vice President Portela and Ambassador Girma also discussed current realities and trends in the Horn of Africa, the Red Sea region as well as in Latin American and the Caribbean.