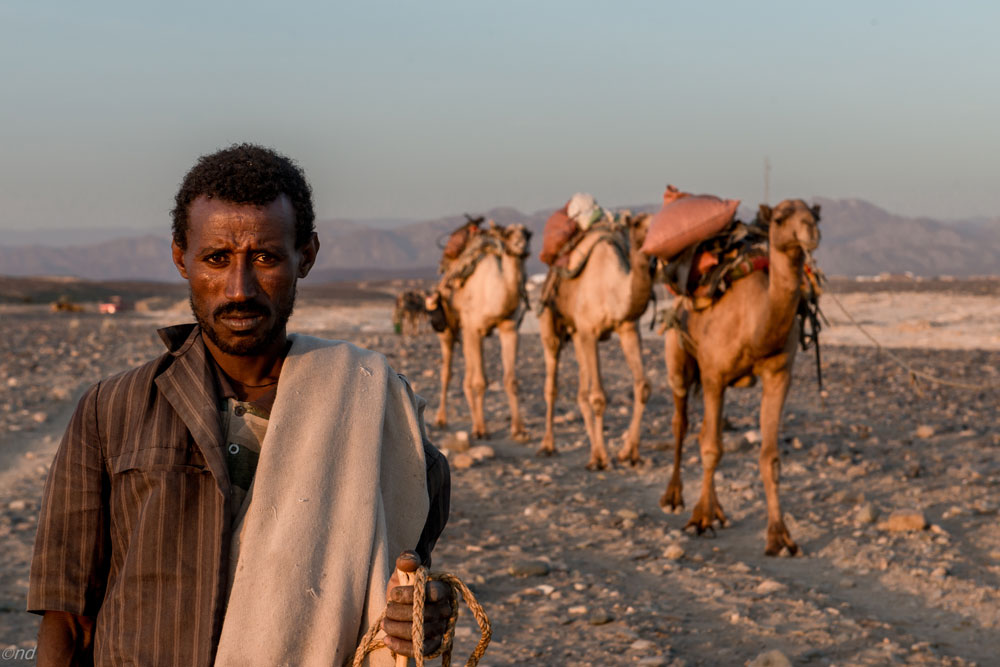 Share on Facebook
Tweet on Twitter
An economic and security blockade aggravates the refuge of the people of Dinkalia Investigation / Abdul Qadir Muhammad Ali. The forties of Hussein Ahmed Adawi left the coastal town of Tiwa, south of the Eritrean Red Sea region, on a journey of refuge ended in Norway, due to the bad economic conditions and the ongoing tightening of the Eritrean government on the people of the region since the nineties until today, as they were banned From fishing, and at best they have given time conditional permits for a week or less, which has starved them, under the scarcity of resources in the region.
The inhabitants of the southern Eritrean coastal plain known as Dinkalia Province (Southern Red Sea Region) have gradually increased since the beginning of 2000, according to an enemy from the family of fishermen, pointing out that many fishermen and their families are forced to flee to neighboring countries Or crossing the sea to Yemen for livelihood, as it says to the ′′ new Arab “, confirmed in the report of the Special rapporteur on human rights in Eritrea issued last May, as the navy’s casting of 5 fishermen From Afar they were selling their fish in Masawa port and seizing 3 boats owned by them, still missing since then, and 20 gobliners are still missing in separate events that took place between February 2018 And February 2019.
The number of Afr refugees from Denkalia province escalated to 27370 February 2015, by the end of 2016, reaching 42200, and by the end of 2017 According to the Office of the United Nations High Commissioner for Refugees in Ethiopia, which confirmed in its latest report that Afr accounts for 5 % of Eritrea’s total population, while the number of refugees registered with the Office is in the region Afriya in Ethiopia 54836 asylum seekers until the first quarter of this year.
(About the percentage of forgiveness in the organization’s report is inaccurate and the percentage of Afr is more than 15 % of the total population of Eritrea)
54836 asylum seekers from Dinkalia Province until the first quarter of this year
The figures of refugees fleeing Eritrea appear to be large, with the total population of 6 million and 81 thousand, according to the World Factbook published annually by the CIA.

The Eritrean community is composed of 9 basic ethnic groups, some of which have extensions within neighboring countries such as Afar, and the Tajrinism that extends within the Ethiopian region of Tajray and Kunama (ethnic group in Eritrea and Ethiopia), According to the 2009 country report of the International Labour Organization and the African Commission on Human Rights, entitled ′′ Constitutional and legislative protection of indigenous rights: Eritrea “.
Dinkalia region inhabits the Dunakul tribes (Afar) with a mix of other groups, and Afar is one of the oldest stable peoples in the southern stripe of the coastal plain overlooking the Red Sea from the Puri Peninsula to the south of Mouaoua north, and to Bab Al-Mandab south, In addition to the wide desert patch around this tape, according to the book ′′ The Afri Triangle in the Horn of Africa ′′ of the late Eritrean politician Muhammad Othman Abu Bakr. The majority of Afr in Eritrea are Bedouin pastoralists, those living on the shores depend on fishing, and salt extraction from the Red Sea, while agriculture is an exception according to the same source.
Forced displacement and confiscation of the livelihoods of Afr Eritrea
Three decades of tightening
The Eritrean authorities have started to narrow it down to the residents of the southern Red Sea region since 1995, as confirmed by investigative sources of those who have left their home, including Ibrahim Ahmed, the official spokesman of Afar Al-Red Sea Organization for Human Rights (Independent Rights), who left The region in 2015 is the result of harassment he suffered in his field of work as a professor at Sawa National Service Camp in Western Eritrea, according to the ′′ New Arab “.
The Territory deprived the enjoyment of public services, where electricity is rarely outside cities, as well as the lack of adequate infrastructure such as roads and hospitals, says Ahmad in France since 2018, adding that the previous types of suffering have led to the escape of those large numbers of refugees To neighboring countries, especially Ethiopia, through which he began his journey of refuge.
Al-Afar has been subjected to extrajudicial killings and enforced disappearances by the Eritrean government from 2000 to 2015, according to the former Special Commissioner on the Situation of Human Rights in Eritrea, Sheila Ketaroth, who confirmed in her 2015 report. The killings led to Afr escape from their lands inside the country and crossed the border into Ethiopia and Djibouti, explaining attempts to resettle the sons of Afr and Kunama by the authorities as deliberate targeting for stripping them of their ancestral lands, livelihoods and cultures I’m sorry.
The situation has worsened by Eritrea’s involvement in the Yemeni war by signing an agreement with the Emirates, establishing a military base at Assab port in April 2015, and the subsequent shoveling, confiscation of land and targeting of fishermen before Emirati Air Force, which killed 200 Eritreans at sea from 2015 to 2019, as confirmed by the ′′ new Arab ′′ Ismail Qabita, executive director of Afar Al-Red Sea organization.
Afr Eritrea has worsened after establishing an Emirati base in their regions
The Eritrean authorities are practicing ongoing violations against fishermen, as confirmed by Hussein Muhammad Ali, former inspector of the Ministry of Fish Wealth branch in Masoua City, who lives systematic violations against the people of the region while serving in the Ministry branch from 2009 to 2011, Among them is preventing fishermen from selling fishes outside the state, forcing them to sell at prices that do not reward the effort and does not cover the special needs of fishermen and their families, as well as not giving fishermen enough fuel to go out to sea, he says to ′′ The new Arab “, from his place of residence in Sweden reached by a refugee in 2013.

The Special rapporteur on the situation of human rights in Eritrea, Daniella Craftez, has received information that the Eritrean army has exploited potas resources (salt extracted from the ashes of some plants) in the Kololi region in 2017 by gradually evacuating pastoral communities from the region, according to In her report, she confirmed that villagers from towns around Kololi have lost their livelihood, hacks and pastures, and entire communities have been displaced, and many of these displaced people have crossed into Ethiopia.
During the targeting period since the s, the navigators owned by the Ankala tribe confiscated in the outskirts of Asab city, where they live for hundreds of years, and the Eritrean government narrowed down the owners of the navigators and its workers, chased them and burdened them Sometimes with different taxes and fees, and other times demanding them to hand over to the government, to take over is the export, according to political activist Abdul Aziz Al-Afri (a nickname for fear of security prosecution, due to his residence in Saudi Arabia), adding that The bulk of the navigators were confiscated during the Eritrea-Ethiopia War between 1998 and 2000, and the order was repeated at the time of the Djiboutian Eritrean War in 2008.
After the Eritrean government signed an agreement to rent an Asab port and establish a military base for the United Arab Emirates, the remaining navigators were confiscated without compensation to their owners, and the lands where palm farms and dom trees were located, and arbitrarily swept away, as well as narrowing on Workers and merchants in Assab city, without compensation, led to their immigration to Yemen and Ethiopia, says Al-Afri.

Forced displacement has worsened after corona

Eritrea’s regime has used another weapon to suppress the inhabitants of the South Red Sea territory, and to practice ethnic cleansing and forced displacement against them, aiming at emptying the region to succeed demographic change policy, as it went to systematic starvation of the population under the pretext of protecting them from Covid-19 pandemic, as documented by RSAHRO, last May 30
The Eritrean government, following the pandemic, worked to impose a comprehensive curfew on 10 April, tightened the closure of land and sea crossings with neighbouring countries, without taking any preventive measures and precautionary measures against the repercussions of this pandemic, which made The inhabitants of the region and its citizens are under a suffocating siege and a systematic plan that makes them face an unknown fate threatening their lives in this isolated and besieged zone by the regime, which forces them to forcibly leave their land, and try dangerous asylum, according to For the monitoring of Eritrean jurists and the report of the Office of the United Nations High Commissioner, which warns against aggravation of living conditions, the Eritrean security forces confiscated 50 fishing boats in the Buri region, a naval centre north of Afr Red Sea on 25 May In addition to confiscating convoys from neighboring countries last May, it included 195 sentences loaded with food, as documented by Afar Red Sea organization.
Although all of Eritrea is almost threatened by a famine crisis, but what distinguishes the Afar areas is that the state has narrowed their production and living tools through confiscation of limited navigators, agricultural lands in the region, and fishing boats, in a severe shortage In foodstuffs, and a significant increase in prices, which made them between two options: either starvation, or attempted refuge, including many risks, as investigative sources confirm.