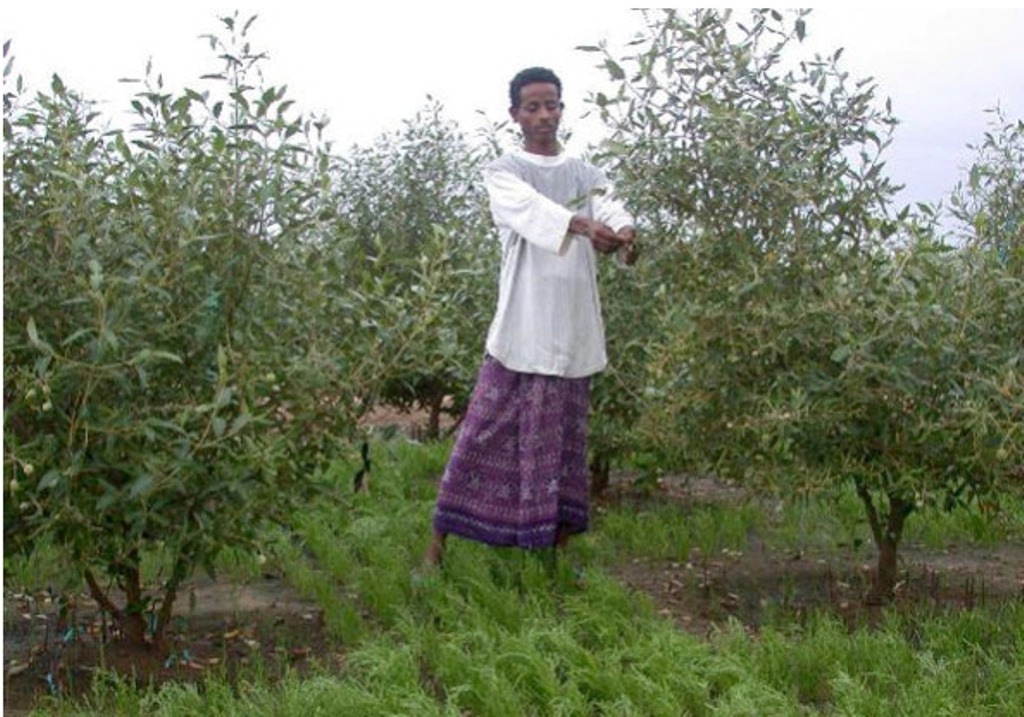 Thomas C. Mountain, who has a special interest in seeing the successful development of Eritrea’s maritime industry, spends much of the year on Eritrea’s coast, fishing, sailing, diving and studying the marine environment there. He has been living and reporting from Eritrea since 2006

The Eritrean Scientist, Habtemichael Habtetzion, “Habtet” to family and friends, is a brilliant, hard working, nationalist young Eritrean scientist. He is presently past the half way point in earning his Ph.D. at one of China’s most prestigious University’s specializing in Aquaculture and already has 4 papers published in prominent scientific journals.

The PBS aired documentary about the development of the world’s first Integrated Seawater Agriculture farm in Massawa Eritrea:

Habtet was one of the first graduates from Eritrea’s Marine College and immediately began work at the then cutting edge project known as Sea Water Farm in Massawa. There he was part of advanced aquaculture programs until the CIA sabotaged the project by introducing a virus into one of the shrimp ponds and used it as an excuse to cut funding for the project.

With the closure of Sea Water Farm, Habtet was the only one able to independently continue aquaculture activities through working with an aquaculture expert from Israel.

In 2011 Habtet was able to secure an invitation for a two month visit to the Nanjing Agricultural University where he quickly caught the attention of a prominent professor through his hard work and willingness to get his hands dirty by joining in the manual labor involved in the aquaculture activities. Of the over 40 African graduate students invited Habtet was one of only four offered a full scholarship for his Masters Degree.

Habtet struggled at first to familiarize himself with the advanced scientific testing equipment and remained on campus during the winter break to spend time directly under his Professor gaining hands on experience with the highly technical systems used to analyze the various experiments being conducted. This hard work paid off and Habtet soon published his first paper in a respected aquaculture journal where he established the accelerated growth rates in fish at higher water temperatures. He followed up on this with another project where he demonstrated the most effective protein levels for fish food in promoting fish growth rates.

In 2013 Habtet was granted a full scholarship to continue his studies in the Ph.D.. program, one of only two successful applicants out of more than 350 Masters Degree graduates from all over the world who applied for the doctorate studies program.

Habtet has already been the lead author in two papers on fish and shellfish immunology and toxicology during the first half of his doctorate studies and is on track to complete his studies with honors in another year and a half.

With a newly minted Ph.D. in his portfolio including numerous papers published in prestigious scientific publications Habtet will be able to pick and choose from any number of very well paid job offers in academia or the growing aquaculture industry from any of a number of countries internationally.

While Habtet could take the money and run his dream is to return to his Motherland and help lead the development of a mass, modern, environmentally sustainable aquaculture industry in Eritrea.

After studying within the center of the largest, most advanced aquaculture industry in the world in China Habtet knows what can be done in our country.

He knows how Eritrea, due to its year round high water temperatures and salinity, nutrient rich near shore waters and calm, “lagoon” water conditions is one of the best places on the planet to develop an aquaculture industry.

To give readers an idea of just how much potential fish farming has here in Eritrea a one hectare fish cage (100m x 100m x 10m deep) can be used to raise 100,000 fish to a mature size of 1.5 kilos in six months. In one year one such hectare sized fish cage can produce 300,000 kilos of fish.

One hundred hectare sized fish cages can produce 30 million kilos of fish in one year and Eritrea has over 4,000 square kilometers of sea area ideally suited for doing so in the Massawa to Tio region of the Red Sea.

Under the leadership and expertise of brilliant, hard working, nationalist young scientists like Habtet, Eritrea can not only provide an ample supply of quality fish for Eritrea’s people to eat, especially our school children, for sufficient fish consumption has a direct relationship to intelligence development in children (fish is “brain food”) but also to provide a major, consistent source of foreign currency earnings from fish exports which can play an important role in helping develop and diversify Eritrea’s economy.

A modern aquaculture industry will provide many thousands of well paying jobs ranging from advanced scientific researchers, to highly skilled technicians in the hatcheries and breeding programs, skilled workers for the fish cages and many more thousands of support workers in processing and shipment of the fish.

It is critical that our leaders recognize and support brilliant, hardworking, nationalist young Eritrean scientists like Habtet and if they do Eritrea’s future will only grow brighter.