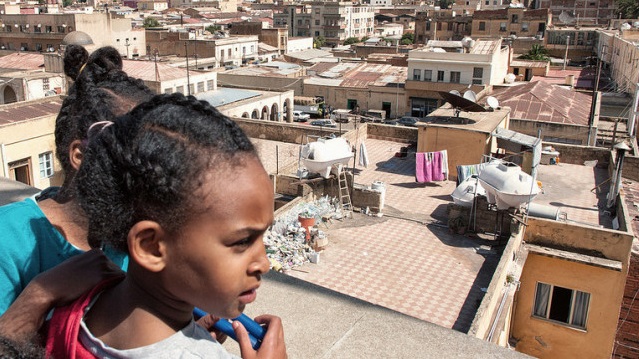 ASMARA (HAN) February 4, 2016 – Public Diplomacy and Regional Stability Initiatives News. By: Simon Keleta. Eritrea saw a boost in media coverage in 2015. As the nation made diplomatic and soft power gains, a normally quiet and silent international media came out of the woodworks to opine on all things Eritrea, attempting to steer the newly emerging narrative such that it would resemble the old one.

Media portrayals made clear attempts to cast Eritrea as a nation making a political U-turn, reforming and changing direction. Most notably, we were told that Eritrea was “opening up” or that it was “opening the doors”–Eritrea’s glasnost. The word “open” implies that the nation was previously closed.

This spin was cast by the spike in “Inside Eritrea” exclusives and string of foreign journalists visiting the nation this past year.Take for example the visit in March by the British Broadcasting Corporation’s Yalda Hakim. We were told that “for the first time in a decade the BBC were allowed to film inside the country, but were accompanied by government minders at all times.” This simply isn’t true. First off, BBC was never banned or not “allowed” in the country. They simply chose to not be here. Up until recently, there were a number of correspondents from foreign newspapers and agencies present in Asmara. Deutsche Welle, Agence France-Presse, Al Jazeera, Voice of America and Reuters all had their correspondents in Eritrea until they decided to leave on their own accord in 2010 (with the exception of AFP).

Second, it seems that BBC now calls tour guides “minders.” Accompanying Hakim, who sought to visit Eritrea’s rural clinics to assess health progress, were officials from the Ministry of Health who were kind enough to show her around. Attempting to make it appear as though they were assigned to restrict her access, she deceptively used supposedly off-the-record audio of a guard denying her entry to a field containing metal freight containers to make it appear as though minders were stopping her from visiting a prison.

Accompanying Hakim was her comrade Sam Piranty of the BBC World Service, who supposedly asked 37 Eritreans a question and explained that “of the 37 people I asked, 37 refused to answer my question.” As such, he attributed the silence to fear of repression.

Was that not an assumption? Could it not be the case that Eritreans simply didn’t want to the risk of answering the questions of journalists stemming from agencies that have historically and repeatedly misquoted them and lied about their country?

Despite the lies and misrepresentations, the BBC journalists inevitably had to affirm the positive ground realities in Eritrea, admitting that there was significant health care progress and that there was no censorship of the internet. Unfortunately, Tanja R. Müller of the Global Development Institute, who offered a couple of relatively fair analyses of the country this year, wrongly repeated BBC’s claim, writing that “of late, a number of journalists…have gained access, often for the first time in decades.

”Then there was the visit to Eritrea by Matina Stevis of the Wall Street Journal, who wrote her own October “Inside Eritrea” series of articles. In an email sent to me and a host of others on October 21st, she wrote:”I was given access to Asmara last month…the stories aim at painting a clearer, more nuanced picture of the Eritrean refugee exodus and how it fits into the context of the European refugee crisis. They also offer a rare, on-the-ground glimpse into Eritrean life and are the first in the mainstream western press to accommodate in detail the views of the Eritrean government.”

Stevis’ articles proved neither nuanced nor rare and WSJ certainly wasn’t the first mainstream western press to detail views of the Eritrean government. It was the same “dictator” this and “dictator” that. The title was even better: “What It’s Like Inside Asmara, One of Africa’s Most Isolated Capitals”. Another boring piece. Yawn. Then we had David Smith of the Guardian. He wrote his “Inside Eritrea” article after spending only one day in Asmara at the invitation of the Sports Commission with the expressed intent of only and specifically covering cycling star and Tour de France jersey-winner Daniel Teklehaimanot. Obviously, he lied. In his article titled, “Inside Eritrea: conscription and poverty drive exodus from secretive African state”, he wrote, “The prosaic truth is that this is just another of the nasty regimes that persist in parts of the world.” Opinion or fact? Not a peep was said about Daniel Teklehaimanot.

Perhaps the only reason the Guardian published Smith’s piece was due to the fact that they were called out earlier in the year for prematurely writing an “Inside Eritrea” series, in the tradition of BBC and WSJ, despite having never even visited Eritrea.What pops out at the critical reader of articles by the aforementioned journalists is the latest manifestations of the shifting portrayals of Eritrea throughout history. In light of news coverage over the last seventeen years, it appears that the mainstream media has taken to new level of hostility towards Eritrea and its leaders that was uncharacteristic of portrayals dating back to the liberation struggle, which commenced in 1961. Today’s reality, it must be understood, is a total departure from past coverage, representing a bold new phenomenon that took place following the events of May 1998. This reality must be firmly understood in the mind of every Eritrean, subjected to the 24/7, non-Eritrean news portrayals of their nation.

During the struggle, Eritrea was simply ignored, allowing successive imperial Ethiopian regimes to get away with some of the most horrific crimes of that era. Few journalists wrote about Eritrea, much less visited the nation. Similarly, the think tanks and human rights NGOs, that fuel much of the reporting on Eritrea today with a steady barrage of “new findings” of human rights abuses, were strikingly silent. Little was said of the Eritrean leadership in the mainstream press in those days. Thus, the world media’s position, most notably America’s, was effectively one of almost total silence on the issue of Eritrea.

Occasionally, however, Eritreans were fortunate to be graced by independent journalists and foreign correspondents, few and far between, with enough courage, discretion or perhaps ambition to visit the African No Man’s Land of journalism. Those who visited sometimes had positive things to say, talking positively about Eritrea’s leadership. In those days, the US was reluctant to take sides in a war in which both combatants were seen as Marxist movements, choosing instead to hedge all bets and see where the chips would land at war’s end. Fearing total loss of American influence in Ethiopia and the Greater Horn of Africa subregion, the Americans chose—at the final hour—to engage a pragmatic Eritrean leadership that would ultimately determine the regional balance of power.

Eager for Western coverage of the Eritrean people’s revolution and war, the Eritrean People’s Liberation Front (EPLF) was sharp in its diplomacy and keen in engaging foreign journalists. EPLF had established offices in Western Europe, Great Britain, the United States and Australia. However, according to journalist Roy Pateman’s 1990 article in the newsletter of the African Studies Association of Australia and the Pacific, EPLF had “deliberately retained a passive [media] profile for two reasons…First, the problem of finance has meant that it been unable to support large scale operations. Second, the Eritrean movement has made a policy decision that in order not to alienate themselves in their host countries, representatives should adopt a moderate stance.” Fellow Australian journalist John Larkin of The Age newspaper, in communications to Pateman, attributed this seemingly coy and mild mannered behavior to “the natural reticence of the Eritreans”.

This reality seems to be lost on the latest visiting journalists from the BBC that claim the 37 Eritrean citizens’ reluctance to talk to them must be due to their being “ruled by fear and repression”.These superficial deductions failed to appreciate any other possible reasons such as the reality that the same media-shy demeanor from almost three decades ago still persists in relatively distrustful citizens, who have been long conditioned by the experience of Western radio silence and abandonment yet atoned for.

Given the dearth of coverage and EPLF’s limited capacity to reach an international audience, it was EPLF’s sheer military prowess in the field in addition to subsequent, illadvised Derg responses of scorched Earth policies leading to famine that ultimately made media on Eritrea impossible to avoid. A reluctant Western press was forced to break silence and send correspondents to monitor the situation. Thus, actions by the Ethiopian regime to crush Eritrean nationalism led to the unintended consequence of greater media of coverage of Eritrea.

Does this not perfectly reflect current realities today? Consider that the US and its proxies in the region have adopted destructive policies of politicized migration, popularized through a singular media narrative about youth “fleeing in droves” from repression in Eritrea. This portrayal, which was intended to serve a protracted isolation strategy for the collapse of the Eritrean economic bureaucracy, has now appeared to backfire with the unintended consequence of drawing the attention of Western European audiences and lawmakers. Since 2014, a number of European state officials, journalists, academics, and representatives of international institutions have responded to public demand for information on Eritrea and public curiosity about the often puzzling and contradictory portrayals of ground conditions that have led Eritrean youth to leave their relatively peaceful nation and brave the Mediterranean.

Now, in come the visitors from far and wide. In comes a deluge of voyeuristic “Inside Eritrea” exclusives by a new wave of young journalists, with little reading and understanding of Eritrea and Africa. In classic orientalist fashion, these journalists have pumped out superficial drive-by pieces and documentaries rife with poverty voyeurism for Western audiences, claiming to have just acquired “rare access” to a “secretive nation” though no such access was ever denied to them. These journalists—and especially their supervising editors— have instead simply opted to write about Eritrea from their distant ivory towers, drawing on the same tired tropes and sound bites from this past decade and repeating, ad nauseaum, the latest hyperbolic “findings” in reports by NGOs without a presence in Eritrea.

To spin in their favor Eritrea’s latest diplomatic and soft power gains in the face of an isolation strategy running seventeen years, the largely US-influenced Western media has portrayed Eritrea in 2015 as changing course, reforming and opening its doors. As one August VOA title unambiguously reads, “Eritrea Opens its Doors”. Such proclamations can be seen as damage control to rectify kinks in the singular narrative on Eritrea. Though it is media spin to cast Eritrea as reforming and opening up, it is true that Eritrea has made some recent changes to improve life of Eritrean and accelerate development. These changes will be covered in the next piece in our series.