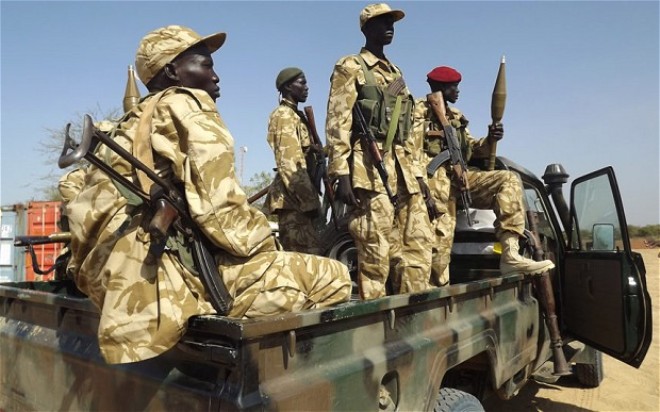 JUBA (HAN) April 4. 2016. Public Diplomacy & Regional Security News. OVER THE past two months, according to the United Nations, some 38,000 people have been driven by hunger from South Sudan to seek refuge in the Darfur region of Sudan.

This is every bit as bleak as it sounds: Today’s hungry are migrating to yesterday’s killing fields in hopes of survival. This is but one glimpse of how South Sudan is spiraling ever deeper into disaster.

President Salva Kiir and Riek Machar, a former deputy, wasted two years fighting a senseless and miserable civil war. It was foolhardy to plunge a state now only five years old into war, a conflict in which thousands were killed and 2.3 million displaced from their homes.

There have been separate investigations by the African Union and the United Nations; the latest U.N. report found that government and opposition forces “killed civilians, raped women and girls, pillaged and destroyed civilian property such as houses, humanitarian infrastructure, medical facilities including hospitals and schools.”

In August, Mr. Kiir and Mr. Machar reached a peace agreement, under pressure from President Obama, among others. They promised to halt the fighting, set up a transitional government and create tribunals to seek justice for possible war crimes and expose the truth of human rights abuses.

Today, the peace agreement is dangerously stalled. Mr. Machar sent bodyguards to the capital, Juba, but he has not yet arrived to begin the transition. Meanwhile, Mr. Kiir is going ahead with dividing the existing 10 states into 28, deepening tensions everywhere.

The redivision is regarded by Mr. Kiir’s foes as a way to reward his allies and penalize enemies. Violence is spreading in the west, and it continues to tear apart towns and villages across a country the size of France.

The violence has also grown more fragmented among South Sudan’s numerous ethnic groups. On Feb. 17, government soldiers and other armed men attacked a U.N. site devoted to the protection of civilians at Malakal; 18 were killed and 90 wounded. Recent visitors report to us that while foreign diplomats in the capital fret over how to implement the peace agreement, Mr. Kiir and Mr. Machar continue their pitiless war with impunity.

South Sudan’s nationhood was midwifed by the United States and celebrated as a triumph of peace after a two-decade civil war. But the warring leaders have squandered American goodwill.

For some time, there has been hope that the pair could be leveraged to do the right thing by the threat of an arms embargo. But the threat is not working. It is time for the Security Council to impose a comprehensive arms embargo to prevent further atrocities against civilians.

The United Kingdom has endorsed it, and so should the United States. It may not be a perfect solution, and Russia remains opposed, but an arms embargo would send a blunt message that Mr. Kiir and Mr. Machar need to hear: Patience with you has run out.