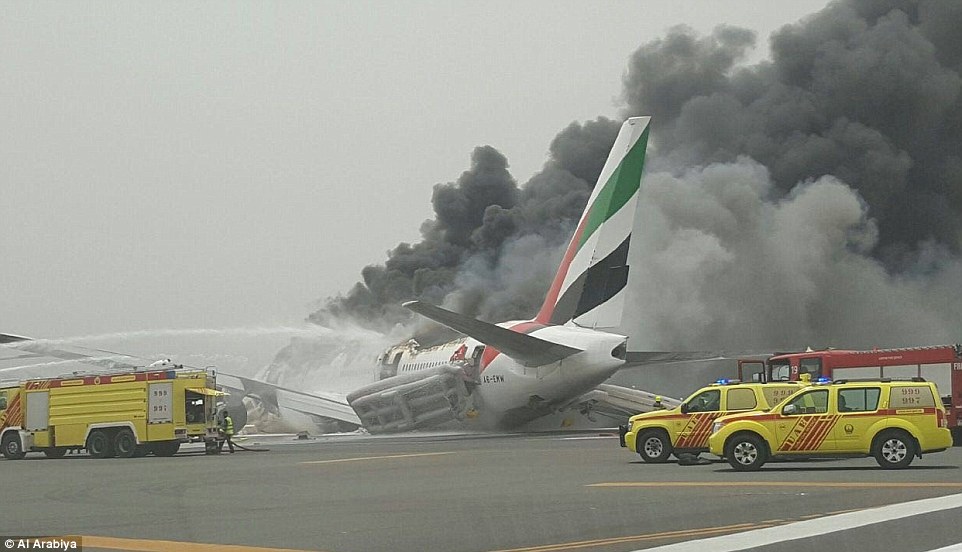 All of those on board, including 24 Britons and six Americans, were led to safety at Dubai International Airport, minutes before the Boeing 777 was completely destroyed in a massive fireball.

Terrified passengers were told moments before landing that there was a problem with landing gear on the plane, which was flying from Trivandrum International Airport in India. Other reports claimed the engine on the right side caught fire and fell off while coming in to land.

Dramatic footage shows the aircraft exploding in a fireball on the runway, with the force of the blast throwing a huge panel from the plane into the air. Separate video captures the moment it scrapes along the runway before coming to a halt in a cloud of smoke.

Incredibly, all on board, including the 18 crew, escaped through emergency exits as the cabin filled with smoke and were able to sprint to safety minutes before the plane exploded into flames.

Passengers have revealed how the flight came down suddenly before bouncing upwards on landing.

One told Asianet: ‘In no time the cabin was filled with smoke. There was no announcement. The emergency door was forced open. We believe all the passengers and crew have escaped. Many of us now feel we have breathing problems because of the smoke.’

Photographs of the incident showed a plane lying crumpled on its belly on the tarmac with black smoke pouring from its upper section while more video shows passengers running to safety at the terminal having been evacuated.

The captain is believed to have sent out and emergency signal in the moments before the plane was preparing to land.

A pilot who witnessed flight EK521 landing told NDTV the plane came in ‘really hard’ and hit the ‘runway tail’. A passenger on another plane said she could see emergency chutes deployed.