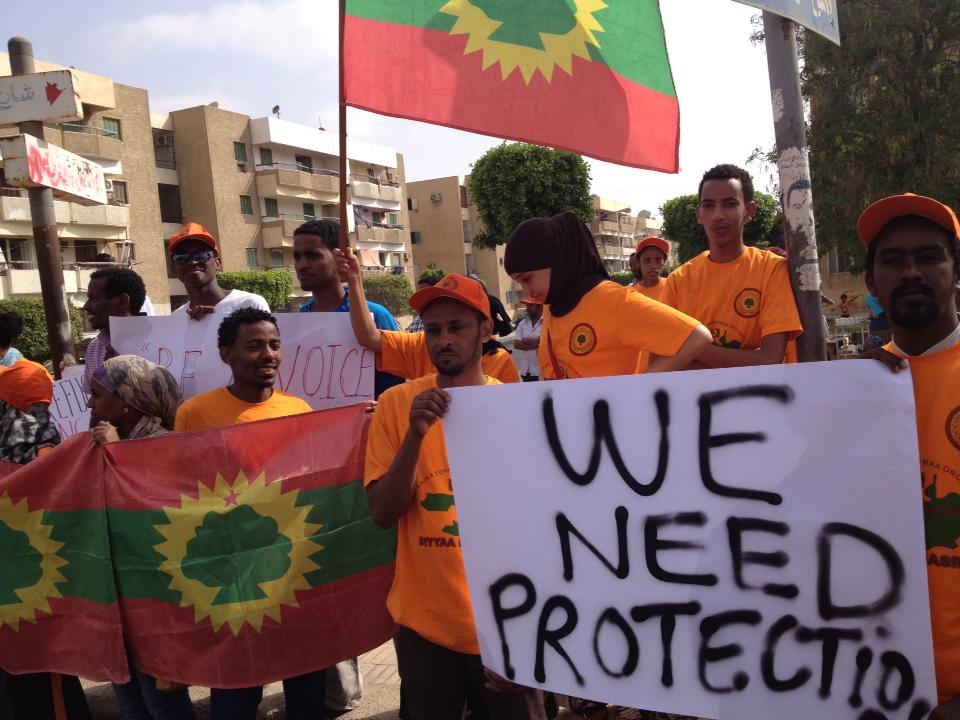 Cairo (HAN) May 7, 2014. The Oromo diaspora community  Protesters gather in front of Arab League in CaIRO to call for international intervention in violent situation in Oromia state, Ethiopia.

According to the Regional security Expert, in this case, Protest law in Egypt were not applied, but facilitated Oromo community protest in Cairo.

In the cases of political activist Ahmed Doma, media and Egyptian Journalists expressed their concerns after he was arrested on charges of “orchestrating illegal protests and assaulting police officers”

“A penal code cannot be put into force retroactively,” lawyer Walid al-Leithy told reporter. The protest law sparked anger among political activists and parties, who considered it a means to restrict the freedom of expression. Many parties, including the April 6 Youth Movement, have held several protests against the law.

But, The Oromo community in Cairo organised a protest in front of the Arab League in Cairo’s Tahrir Square on Wednesday to denounce the killing of Oromo protesters in Ethiopia last week.

Dozens of the Oromo protesters demanded the Arab League, African Union and the United Nations intervene in the situation in Ethiopia’s Oromo state, where tens of ethnic Oromos were killed last week in protests over the expansion of the capital Addis Ababa.

Ethnic Oromo students have been protesting since April against the Ethiopian, who they accuse of intending to displace farmers from their territories in the capital of Addis Ababa through plans to develop and urbanize the city.

In egypt If there is one advantage in the protest law, although there are not many, it is that anyone who organizes a peaceful protest without informing the authorities may pay the fine only,” he said.

Geeska Afrika Online Archive 2013: Last Year, Refugees from Ethiopia’s Oromo community protest outside the office of the United Nations High Commissioner for Refugees (UNHCR) in Cairo, Egypt against the construction of the Great Renaissance Dam.

Abdel-Kader Goumy, one of the protesters, told Al-Ahram’s Arabic language news website that the Renaissance Dam is intended to generate electricity, and, as such, there is no reason it should be built on the Nile, rather than on Ethiopia’s other rivers.

Oromo refugees in Egypt: “The tribe supports Egypt’s right not to be adversely affected by the dam,  Addis Ababa is not in need of water, rather it aims to build the dam for political purposes,” he added.