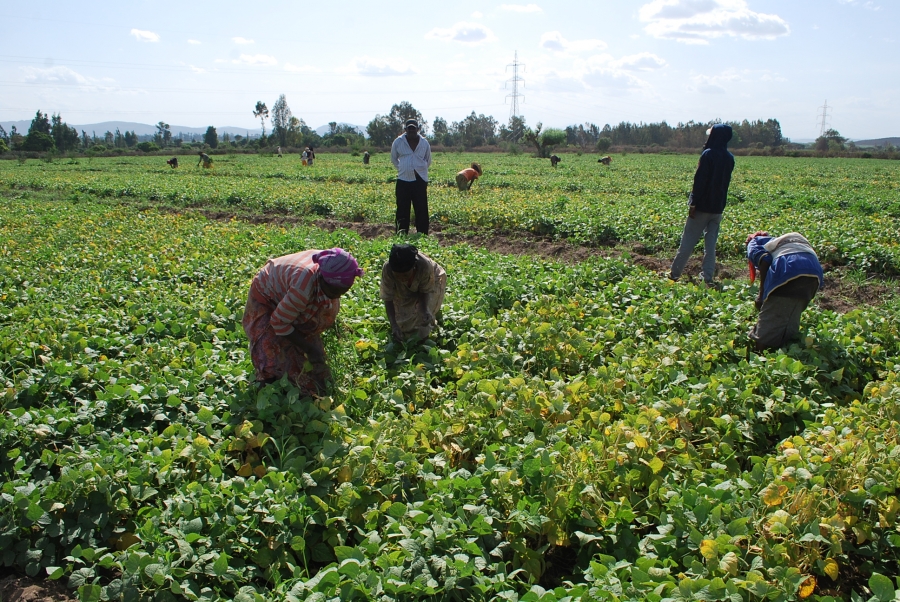 ADDIS ABABA (HAN) April 26, 2016. Public Diplomacy & Regional Security News. Involving farmers in seed multiplication is taken as an effective means of reaching farmers with improved ones. As it needs serious care beyond farmers effort, seed multiplication job requires strong commitment and follow up of professionals. Specially, in difficult circumstances such as when drought and other unexpected phenomena occur, multiplying drought seed become critical.

As it is one of its duties and responsibilities, the Agriculture Research Institute has been conducting research on new seed varieties and introducing them with the areas which have high, medium and low rain fall capacity. As some parts of the country has been hitting by the drought caused by El Nino, the Institute has developed and multiplied various early maturing and drought-resistant seed varieties in response to the drought. In order to meet the seed inquiry from all over the country, the Institute, together with other stakeholders, has been multiplying these seed varieties by involving farmers.

Recently, team of journalists drawn from various media outlets visited the effort of seed multiplication by the Institute at Melkasa, Worrer Agriculture Research Center and stakeholders such as Ethiopian Seed Enterprise and Amhara State Seed Enterprises.

Haileselassie Kidane is Technology Multiplication Coordinator at Melkasa Agriculture Research Center. According to him, the Center has been developing three types of soya bean known as Awash I, Awash II and Nasser. These seed varieties can be harvested within three months period in areas experiencing low rain. As they are maximizing profitability of farmers, especially Awash I and II are highly demanded by the farmers. Nasser is also demanded especially for food.

“We reproduced the three seed varieties last rainy season. These seed varieties could thrive well in areas having similar rainfall intensity with Melkassa. They are highly demanded in Rift Valley areas. It is possible to harvest 22-25 quintals per hectare. Due to the reduction in the volume of the Awash river, we are multiplying seed only on six hectares of land,” he added.

Sorgum is the other crop which has been multiplying in Afar State Worrier Agriculture Research Center. Institute’s National Sorghum Coordinator Dr. Taye Tadesse that due to the current drought caused by El Nino, sorghum growing areas have been highly affected. Thus, shortage of sorghum could occur in the next season. Cognizant of this, the Institute has been introducing various drought-resistant sorghum seed varieties.

“Over 100 quintals of seed are produced through community based seed multiplication. What we found out was, if it is possible to harvest water on farmers land, improved seeds could also be multiplied involving the farmers. We buy the seed from farmers at a reasonable price,” Dr. Taye stated.

Amhara State Agriculture Research Bureau Koka Dam Project Senior Agronomist Birru Ayalew said that currently, we are multiplying various seed assortment such as wheat, maize, onion using irrigation. “When we think of seeds multiplication job, we encourage farmers willing to do so at their farm land. We report the feedback to Agriculture Research Institute. They come up with new seed variety named king bird which is resistant to yellow rust and other pests,” he added.

This time, the seed is being matured, farmers are harvesting seeds and preparing it for sale. Looking the current performance, 40 quintal of yield per hectare is expected from the new seed variety.

Some 12 farmers associations actively mobilizing farmers to be effective in seed production. The enterprise has its own quantum professionals to check quality of seed. ”Currently, over 750 hectares of land is covered with new seed varieties and we are expected to get 80,000 to 90,000 quintals of seed. And to get the latter, we had distributed 600 quality of seed,” Birru said.

Institute Technology Multiplication and Seed Research Director Dr. Abebe Atelaw said that the Institute has been conducting research on new seed varieties and introducing to areas which have high, medium and low rain. When the drought occurred, the Institute has been engaged in replicating drought-resistant seed and supply them to seed enterprises. So far, it has also multiplied sorghum, maize and Teff, soya beans seeds which are conducive to Rift Valley zones, according to the Director.

“In connection with the drought, in general, we are multiplying various species of seed together with stakeholders. King bird and Kekeba wheat varieties, for instance, mature within short period of time. Including sorghum and maize, we are reproducing various types of seeds on 500 hectares of land through irrigation at Worrer, Koga, Ayohe, Kulumessa, Bishoftu and other research institutes. This year, we are producing better than before,” Dr. Abebe said.

Indicating that the Institute is not in a position to produce seeds sufficient for national consumption, the Director said, “We are now facilitating conditions to seed enterprise to prepare additional seeds and meet farmers demands. Our responsibility is providing basic seeds for seed enterprises and other stakeholders. We are successful in this regard. By expanding irrigation infrastructure development, we can produce better seeds.”

Dr. Abebe Atelaw said that yellow rust has uncertain and it can adapt itself with the environment. Previously, Kumessa and Galama were best seeds chosen by farmers. Later on yellow rust affected farmers productivity. Thus, the Institute then release Kekeba and Dendea seeds recognizing that they have capacity to resist disease and pests. He said, “In practice, we eye that Kekeba resist only yellow rust but not steam rust. We again replace it by king bird. Last year, we brought 50 quintals of king bird seed from abroad and distributed to 50 woredas. This year, the demand of farmers has shown an increase. The seed has dual advantages, one is resisting the disease and mature between 90 to 100 days. Now we plan to replace kekeba seed with that of king bird allover the country. Regarding production capacity, it was possible to harvest 30 to 60 quintals from kekeba per hectare.”

The institute assured productivity of the new seed variety before distributing to farmers. Accordingly, the seed has shown 15 percent increase compared with the previous. So far, it has been proved 100 wheat varieties, king bird is preferable in resisting drought.

The Institute, multiplying the seed into four major states, planned to distribute it to other areas. At a national level, 500,000 qunital seeds would be demanded.