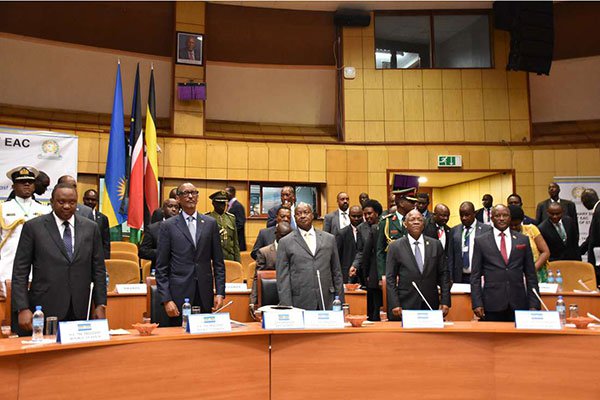 East Africa’s heads of state met in Arusha on Friday as a dark cloud of unresolved longstanding trade spats, tariff and non-tariff barriers and crippling financial challenges hang over the bloc.

For Kenya and Tanzania, talks on trade in sugar and tobacco hit a dead end after the EAC Secretariat was accused of failing to resolve the outstanding issue over the past seven months.

Rwanda has recently experienced simmering diplomatic tensions with Burundi and Uganda over long-running security concerns that threaten to spin out of control.

Kenya’s President Uhuru Kenyatta and his Tanzanian counterpart John Magufuli were expected to revisit the persistent trade spats between their bureaucrats since they directed that the differences be ironed out at the last summit in Kampala in February last year, with little or no progress achieved so far.

Uganda’s President Yoweri Museveni handed over the chairmanship to Rwanda’s Paul Kagame and they are expected to ease tensions between the two countries, amid incidents that have only exacerbated their differences. One such incident was the deportation of Rwandan national Annie Tabura, a senior executive at MTN, on charges of compromising the country’s national security.

At the Council of Ministers meeting which concluded on Thursday, it emerged that the region only managed to implement 16 out of the 78 directives issued last year, pointing to a creeping lethargy in executing integration programmes.

Nairobi and Dar es Salaam are still engaged in a spat over Kenyan confectionery to which Tanzania has denied duty-free access into its market, over a dispute on rules of origin.

“During the meeting of November 16, 2018, Tanzania expressed reservations on the findings of the verification mission and further submitted that the duty-free sugar imported by Kenya in August 2017 still has an impact on locally manufactured goods and therefore all confectionery transferred from Kenya to Tanzania shall be subjected to external tariffs,” notes a report by the Council of Ministers.

In May 2018, the EAC also directed Uganda and Tanzania to undertake a verification mission on sugar by June 24 ,2018. In July, the Secretariat communicated the findings of the verification, and requested partner states to accord Community preferential treatment to confectioneries, provided they meet origin criteria.

This year’s meeting also revisited the perennial question of budget funding, with some members taken to task over their commitment to submitting their contributions to the Secretariat.

Poor funding has seen various EAC organs, including the legislative assembly, halt their activities. In November last year, it emerged that Kenya, Rwanda and Uganda have been sustaining the operations of the Secretariat by submitting more than half the contributions in the current financial year.

The regional countries were given up to the end of last year to pay up their outstanding budgetary contributions for the financial year 2017/2018. So far, it is only Kenya, Tanzania and Rwanda which have made this full payment, with South Sudan and Burundi still having more than $12 million of their expected remittances for 2017 budget pending.

At the May 2018 meeting, the regional countries were asked to disburse at least half of their budgetary contributions for the 2018/19 financial year by end of September, to enable the EAC organs and institutions discharge their mandates.

From this directive, Nairobi has so far disbursed 80 per cent or $6.68 million, while Uganda has disbursed 53 per cent or $4.46 million. The other regional countries have not met this request, with Tanzania disbursing 26 per cent, while Kigali sent $2.09 million. South Sudan and Burundi are yet to disburse any funds to the secretariat.

The Ministers are now considering sanctions against defaulters in a bid to enforce timely remission of funds.

“The session further discussed the experience of the African Union where reference to sanctions against member states with arrears has resulted in improvement of the disbursements performance. There is need for fast tracking the consideration and approval of sanctions mechanism at EAC,” a final communique from the ministers said.