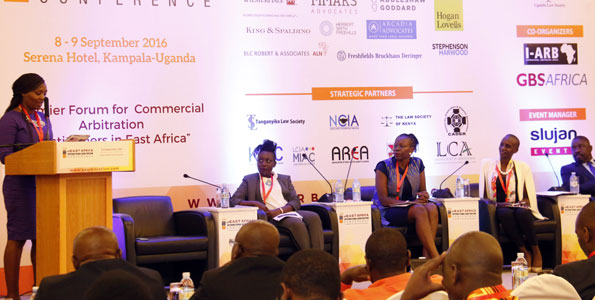 NAIROBI (HAN) September 9.2016. Public Diplomacy & Regional Security News. By Charles Kazooba. As East Africa embarks on major infrastructure projects in oil and gas industry, roads and railways, arbitrators in the region are calling for the creation of a dispute resolution centre.

The arbitrators argue that such a tribunal located in East Africa could benefit from flexible local laws and reduce the cost of international arbitration.

The arbiters, at the 4th East African International Arbitration Conference in Kampala on September 8, also debated on whether the tribunal should be independent from the regional governments or based on a public-private partnership.

Some argued that the region would only be trusted by foreign investors, if they are assured that commercial disputes would be handled by an autonomous arbitration tribunal.

“If we are to harness the potential of investment in East Africa and to avoid transferring arbitration cases abroad we need to embrace proper resolution of disputes regionally to reduce on the cost of these case in Europe and USA,” said Uganda’s deputy Attorney-General, Mwesigwa Rukutana, while opening the conference.

The meeting’s theme is “ Infrastructure and Natural Resources” aimed at capacity building for actors in the region’s legal system.

Although the East African Court of Justice has jurisdiction over arbitration, the court has not handled any such cases. However, common regional rules are being made to govern national arbitration centres.

“We want to offer a more cost-friendly environment to investors especially with the increase in infrastructure investments,” said Jacquiline Pimer, a project manager-Trade, at Arcadia Advocates Uganda.

Mr Rukutana urged universities to include international arbitration in their syllabi to strengthen legal and business systems and also avoid outsourcing arbitrators.