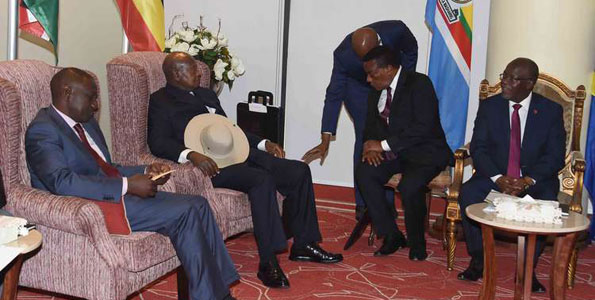 The East African Community (EAC) heads of state have pushed the date for the final decision on the bloc’s commitment on the Economic Partnership Agreement (EPA) with European Union to January next year.

Following almost six hours of closed-door meeting at the Magogoni State House, Dar es Salaam, the EAC chairman, Tanzania’s President John Magufuli told a plenary session that after considering all the issues raised by member states on EPA, the bloc’s leaders decided to seek a three-month extension to allow for further deliberations that will be a “win-win.”

The deadline for the East African countries to append their signatures on the trade agreement was October 1, 2016.

Dr Magufuli noted that there are number of contentious issues that some partner states especially Tanzania would like to be ironed out first before signing the deal. He said top of the list was how the Community would protect its industries.

“In Tanzania we have already resolved to create an industrialised economy; so if we are to adopt this agreement the way it is right now, the question would be how can we safeguard those industries from competition with European industries?” he said.

Another issue of contention, according to President Magufuli, was the likely impact on the region’s agricultural sector – which is the largest contributor of GDP – as imported produce from Europe would likely be cheaper considering that EU farmers largely benefit from subsidises.

“Imports are also a major source of income in our countries. In Tanzania, for example, we estimate that we would have lost 45 per cent of income from EU in 25 years,” said Dr Magufuli.

Burundi, which is embargoed by the EU following political unrest, had said it would not sign the trade deal given its current relationship with the Europe.

Dr Magufuli also said EAC would need to make a thorough review on how the Brexit will impact the execution of EPA since UK has been a major trading partner with the region.

Since 2007, Europe and EAC have been negotiating on EPA, a reciprocal pact that would give a duty- and quota-free access to the EU. Already Kenya and Rwanda have signed the pact, but the trade deal requires that all EAC states commit to it for it to take effect.

Kenya is the only nation that stands to lose access to Europe because it is not grouped among the Least Developed Countries hence does not benefit from the unilateral Everything But Arms protocol.

The EAC secretariat was been tasked to officially write to EU not to penalise Kenya with huge tariffs on its exports for missing the October deadline.

Uganda’s President Yoweri Kaguta Musevi urged the EU to agree to the extension request to allow the region to come up with a collective response.

“I had to read all 146 EPA articles so we know what we’re talking about. Give us three months and we shall give a collective answer which is better than fragmented ones. Don’t punish Kenya because it is one or two inches taller than others, that is not fair,” he said.

He noted that as much as market access is important, industrialisation of EAC was the way forward and thus the region could not continue to export raw materials.

For his part Kenya’s Deputy President William Ruto, who represented President Uhuru Kenyatta at the meeting, said that after long and candid consultations, they had agreed that more time and deliberation was needed so that all member states could move together as a bloc.

“Going forward our commitment is to our development paradigm… which must be of the nature that can give us the best value and must underpin our engagement with all our friends and partners,” he said.

“We should always remain together and be flexible whenever possible,” he said.

During the extraordinary summit, the heads of state also received and deliberated on the Council report on South Sudan and another on Inter-Burundi dialogue facilitated by former Tanzanian president Benjamin Mkapa.

The leaders called on the wrangling parties both in Burundi and South Sudan to put national interests first and fully engage in finding lasting peace which will develop their countries and ultimately the region.

President Pierre Nkurunzinza of Burundi was represented in the meeting by his Foreign Affairs minister Mr Alain Nyamitwe, while South Sudan was represented by Mr Aggrey Sabuni who is President Salva Kiir’s economic affairs advisor.