Home frontpage EAC Employees in Court to Protect their Contracts 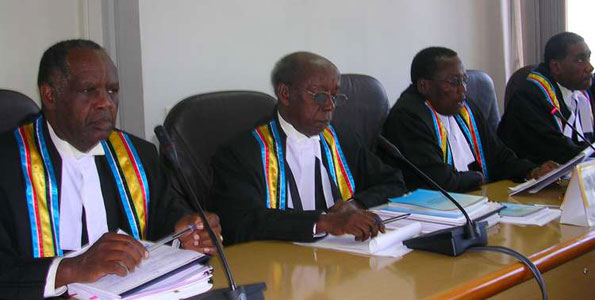 The employees of the Africa Peace and Security Architecture (APSA) support programme have lodged a case in the East African Court of Justice (EACJ), seeking orders to overturn the Secretariat’s decision.

On June 17, Dr Libérat Mfumukeko, EAC Secretary-General, wrote to the APSA staff, informing them that their contracts had been terminated and giving them three days to hand over.

The hearing for the preliminary application to stop execution of the Dr Mfumukeko’s letter is scheduled for September 14, Yufnalis Okubo, the registrar of the court said.

The aggrieved employees are now accusing Dr Mfumukeko of abusing the rules of procedure, arguing that their dismissal will affect peace initiatives in the region.

According to correspondence seen by The EastAfrican, Dr Mfumukeko’s decision to close the department was attributed to lack of funds as the European Union (EU), which funds the activities of the organ through the African Union, cut funding.

“Considering that the EAC has no funds to support the APSA project staff, we hereby give you a notice of three months to terminate your employment contract effective from June 20, 2016,” reads a letter signed by Dr Mfumukeko.

The affected employees, however, responded that the termination of their contracts was not in line with the EAC rules and regulations, and urged Dr Mfumukeko to reconsider his decision.

Despite the delays, they said, the process to secure funding for the project was in the final stages, adding that the Secretariat could advance funds from its coffers to sustain the project in the meantime.

A letter dated July 18 and seen by The EastAfrican, informed Dr Mfumukeko that the process of releasing funds had become a lengthy one due to the new EU conditions.

“It is expected that the AU in the coming days will visit the Regional Economic Communities to sign agreements that will pave the way for the disbursement of APSA funds to the RECs. In the meantime, disbursement of arrears (August to December 2015) has been done and funds are expected to be in the EAC-APSA account by July 23, 2016,” the petition reads.

It further indicates that the disbursed funds will be enough to pay off the money advanced by the EAC Secretariat to the APSA project and cover emoluments for staff for the remaining part of 2016.

The fight between Britam and Liberty had divided staff, with some senior staff being accused of pushing for cause of each of the bidding companies.

A series of letters and email exchanges between Dr Mfumukeko, and his deputy Dr Enos Bukuku on the insurance cover shows that the procurement evaluation committee was put under “undue pressure” to award the contract to one of the firms.

In a letter addressed to Dr Mfumukeko dated July 21, Dr Bukuku, who is in charge of procurement and infrastructure noted that there were “massive efforts to thwart and disregard the results of a procurement process” to secure insurance cover for the EAC.

Dr Bukuku, who is also the acting deputy SG in charge of Finance and Administration, accused some senior officials of campaigning for one of the firms to win the tender.