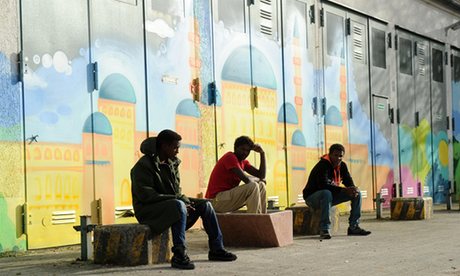 Unofficial Summary and Translation.On 30 June this year, a plenary debate took place following the Letter to Parliament “Eritrea and the influence of Eritrea in the Netherlands” (TK, 2015-2016, 22 831, nr. 108), attended by the Minister of Foreign Affairs, State Secretary of Security and Justice and the Minister of Social Affairs and Employment. Following the debate, several motions were adopted by the House of Representatives. With this letter, the cabinet provides an update on the progress.

Outcomes of research and reaction of the Cabinet

The Cabinet will take further steps based on the report. It has spoken to organizations such as the police, the public prosecutor and Dutch organisations for asylum seekers and refugees. They indicate that they recognize the picture painted by the report (or part of it) and find the report useful for their activities.

The Cabinet describes the steps it has taken and will take on several findings of the report:

Fear and pressure in the Eritrean community

The police reports that have already been filed by Eritreans will be in analyzed. In addition, the police and the public prosecutor, as well as other relevant organisations, will pay attention to the mistrust or ignorance of Eritreans regarding the police.

Role of the Eritrean embassy

It is not acceptable that foreign authorities influence the freedom of citizens in the Netherlands. Exerting pressure, force or extortion is not allowed. However, the public prosecutor cannot be ordered by the Cabinet to investigate the involvement of the Eritrean embassy in The Hague in criminal offenses, such as extortion and intimidation. It will, however, be alert to any concrete evidence that such offenses are taking place, and if this is so, it will investigate.

The Chamber of Representatives had also urged the Dutch government to support referring the report of the UN Commission of Inquiry on Eritrea to the UN Security Council. In the General Assembly of the United Nations, the Dutch government supported the draft resolution of Djibouti and Somalia to achieve this. However, the resolution had insufficient support and was withdrawn.

Following this, the ministry has established a supplement to the sanction regulations on 26 October 2016 to execute the UN Resolution 2023 (nr. MinBuZa-2016.707235). This regulation prohibits the collection of taxes when this is done with fraud, force, extortion or other criminal offenses and when the revenues are used in contravention with the weapons embargo. Germany and Canada already have such a prohibition.

The ministry of Foreign Affairs will commission an investigation into the diaspora tax in several European countries. There are not many supporters in other EU member states for such an investigation. Therefore, the Cabinet will commission an investigation via a research institute. The Cabinet will report on the findings in the second quarter of 2017. On the basis of the report, possible measures will be taken. The police and the public prosecutor will, in the mean time, point possible victims of force, threat of fraud to the possibility of filing a police report.

The Dutch organisation for reception of  asylum seekers (COA) will take note of the findings of the report and will ensure heightened alert of possible signs that people allied to the Eritrean regime are present in reception centres and the impact this may have on inhabitants. COA will stimulate people to file police reports for (criminal) offenses or do so itself when inhabitants refuse.

It is unacceptable that people allied to the regime, such as for example YPFDJ Holland, are active in reception centers. COA will not give access to such people when it has concrete indications that this is the case. This includes people allied to the YPFDJ, which the civil court has judged to be “an extended arm of the dictatorial regime”.

COA indicates that they think that a screening of volunteers and visitors is not executable. They  would need both criteria for which organisations should be included and which people are active in them. Those data are not available to them. Instead the COA has several preventative measures: No political or religious activities that disturb the life of inhabitants are allowed at COA locations; all visitors must present identification, will be registered, and must have a valid goal; COA has volunteer coordinators that keep an eye on any offenses.

Participation and integration of Eritreans in the Netherlands

It is important to see how the (feeling of) safely can be improved for Eritreans. The following steps have already been taken:

Several projects are ongoing to help local governments and organisations with problems in integration, for example about e background of Eritreans and insight into the needs of recently arrived Eritreans. On the basis of these projects, the minister of Social Affairs and Employment will assess if additional action is needed.

The Cabinet continues to follow the situation in Eritrea and the Eritrean diaspora in the Netherlands closely and will implement the measures named above.