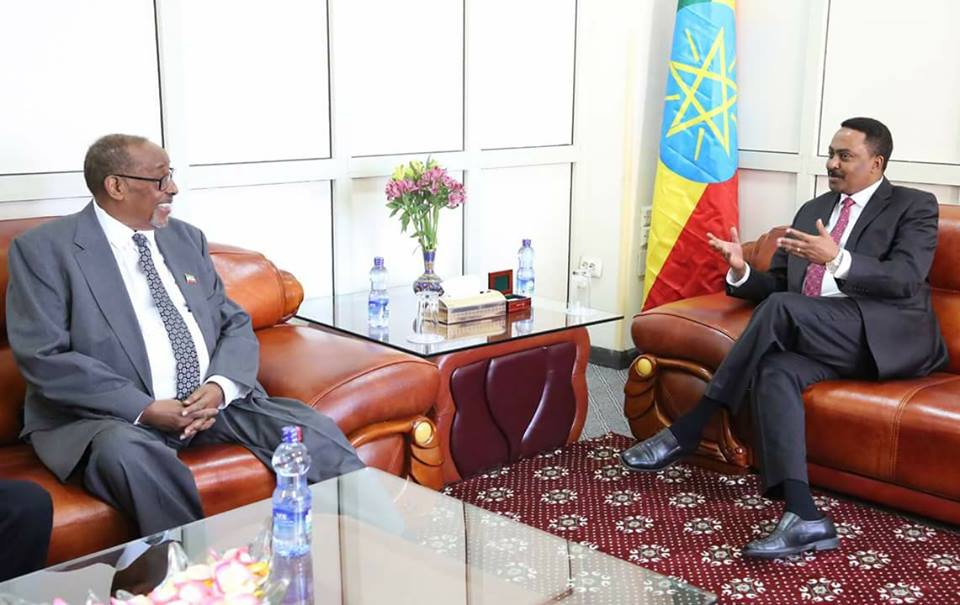 Ahead of the meeting with Prime Minister Hailemariam Dessalegn a delegation led by Somaliland President Mohamed Silanyo met with Foreign Minister Dr. Workneh this morning (November 10).

Mentioning the warm welcome accorded to him and his delegation, President Mohamed commended the government of Ethiopia for its unwavering commitment in being accessible to the requests of the people and the government of Somaliland more than any other country. The President noted with satisfaction the success of cooperation between the two sides and urged the need to scale up collective efforts in widening and deepening the ties in arrays untapped before.
Given the shared aspiration, language, culture and history between the people of Somaliland and Ethiopia, Dr. Workneh emphasized the need to lift up the people to people relationship to a high gear. Naming Somaliland an “Oasis of Peace”, the Foreign Minister expressed his hope that Somaliland will witness another free, fair and peaceful election as Somaliland is gearing towards its third presidential election on November 13 in which 704, 089 registered voters are expected to elect a new president. Dr. Workneh noted his Government’s readiness to hold up the exemplary democratic and economic developments in Somaliland.

The election is expected to mark a milestone in Somaliland’s electoral development as it will be the first time that the incumbent, President Silyano, has not challenged for the top job.
BY: Workneh Gebeyehu