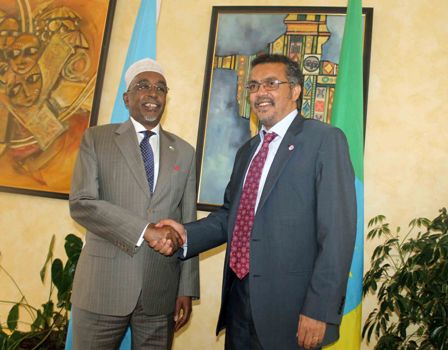 ADDIS ABABA (HAN) July 27.2016. Public Diplomacy & Regional Security News. Foreign Minister Dr. Tedros Adhanom met with the President of Somalia’s South-West State, Sharif Hassan Sheikh Adan today (July 27). The President of South West State, Sharif Hassan acknowledged the role of the Ethiopian government in rendering support to promote peace and stability in Somalia. The President called for a consistent support from Ethiopia to bring about a sustainable peace in the country. This, according to Sharif Hassan, would enable the country to have a successful election in Somalia that would be a corner stone for the upcoming 2020 one wo/man one vote election.  Dr. Tedros said Ethiopia would further reinforce its endeavors towards enduring peace and stability in Somalia. The two sides also discussed on strengthening the bilateral business ties.