ADDIS ABABA (HAN) June 1.2016. Public Diplomacy & Regional Security News. Foreign Minister Dr Tedros held discussions with Philip Hammond, MP, Secretary of State for Foreign and Commonwealth Affairs of United Kingdom at his offices today (June 01, 2016). The discussions covered issues of regional peace and security, migration and refugees, and trade and investment. Dr. Tedros stated the visit will further enhance the bilateral relations between the two countries. Foreign Minister Dr. Tedros briefed the delegation on the peace and security state of the region and challenges related to threats from Al-shabab and ISIS. He further related Ethiopia’s contribution to the AMISOM, and the country’s policy and current practices and achievements on migration and the protection of refugees from neighboring countries. 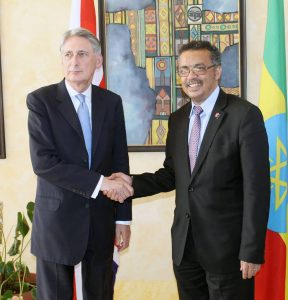 Secretary of State for Foreign and Commonwealth Affairs of United Kingdom, Philip Hammond emphasized the bilateral relations between the two countries should further be strengthened. He also stressed the momentum of the achievements of AMISOM should continue, adding that the joint plan and operation should advance more ahead. On trade and investment, Hammond said the partnership between the two countries should further be explored, while noting that Ethiopia offers huge potential for trade and investment in terms of cost of labor, market proximity to Europe and Middle East, and transport access to raw materials among others. Hammond also said investments coming to Ethiopia should prioritize job creation. Acknowledging that the investment and trade partnerships are increasing, Foreign Minister Dr. Tedros on his part underscored that given the potentials, the trade volume and investment flow should further be maximized.