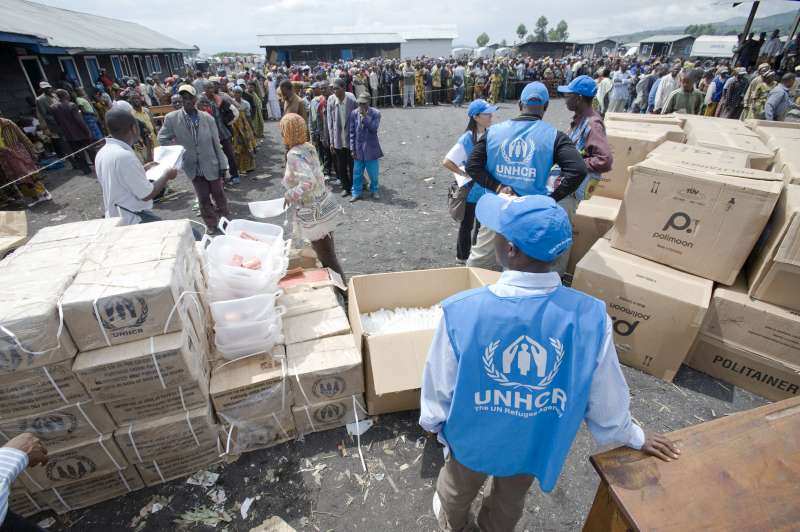 Djibouti (HAN) October 26, 2015 –Public Diplomacy and Regional Security and stability Initiatives News. Will Donors Put Pressure on UN to Do the Right Thing? The Yemen United Nations Refugee Agency and a number of its partner NGOs are humiliating Eastern African refugees from Somalia, Eritrea and Ethiopia’s Ogaden and Oromia region.

On Tuesday, The UNHCR special guards and its receptionist Amir Kamil  harassed several females that went  to the Agency’s Office to raise their issues with the UNHCR staff at Algerian Street, Sana’a.
“I arrived at the Bureau of Refugee Affairs (BRA) in the morning to share my personal concerns with the UNHCR protection counselling officials, but Hamid hit me on the chin and said to me go to your Ogadeni fellows that make their business chewing (Khat) the stimulating plant in the afternoons,” said Farhan.

“And when I said to him, do not discriminate against us. He ordered the guards that beat me with their batons,” added Farhan, displaying her rent abaya dress as she breaks down in tears.

The Ogadeni asylum-seekers in Yemen face a stark choice indeed, namely either to commit staying in Yemen and endure the bombardment and economic sanctions on Yemen in which the conditions of life are truly miserable and the humanitarian assistance is very limited, despite the generous international donors donations widely reported.

Approximately five hundred asylum-seekers from Somaliland of Ogaden are committed to staying in Yemen as they can’t return, where they Ogadenis risk persecution.

Half a dozen families mainly women and children that managed to cross the sea to escape the fighting in Yemen have been arrested, detained and tortured in Ethiopia by the government.

Hibo Ja’lale, who narrowly avoided death after her house was hit a missile the evening that the Saudi-led air strikes began on March 26 is among of them.

She was strangled for confession and eventually was forced to demonstrate against her other fellow Ogadenis including Ifrah Ahmed Nur and Barlin (Berlin) that they were allegedly ONLF-sympathisers during their stay in Yemen.

The UN Refugee Agency (UNHCR) has no plan to help them out of Yemen and dozens of women that protested in front of the UNHCR Yemen office last week received a negative response from the UN’s protection counselling officials.

According to those allowed to enter  the UN office, the UNHCR’s respond to their security concerns and suffering was simply, “Everyone is suffering not only you, Yemenis are suffering, too”. However, the UNHCR is cognizant of the difficult circumstances and fear that its clients experience on daily basis.

The Ogadeni communities have lived in Yemen since 2007 and most of them are single parents that work as maidservants to take care of their families, but recent months many of them lost their jobs after workplaces shut down due to the air strikes, Yemen’s economic sanction and people holed up in their homes.

Many of them say that they do not meet their basic needs including water, food and shelter and cooking gas which their survival depends on them.

” I could not pay for the room for two months and we don’t share water and cooking gas equally with the Yemenis. We need food, water, blankets, and a safe place to stay. My children need milk, diapers and clean, warm clothes,” said a mother, who asked not to be named because she feared reprisal from the Ethiopian government.

“Our problem is not known to the rest of the World. There is no authority that speaks for of us.”

There is no any independent body overseeing what the UNHCR Yemen do on the ground level. And no private human rights organizations that could put pressure on UN to do the right thing.

However, there are high profile individuals that challenge with the UNHCR officials. Eva Mozes Kor is one of them. She asked on February 20,  the agency’s Spokesperson Melissa Fleming on twitter, ” Hi Melissa-I am child survivor of Auschwitz-I can’t understand that if you are doing your job well why so many refugees?”

I joined the interaction and tweeted, ” Melissa, a message dated 01/04/13 at 2:04 PM that you sent me was full of hope but since that day no help.”  the next day when I signed in my Yahoo mail account to see the message again was not there. And the message that I sent to her, either. Perhaps, she managed to delete all the references, I said to myself.

The message was about the Ogadeni refugees who registered with the UN as refugees from Somalia, but their status is similar to those Ogadenis who have asylum in Sana’a. Scores of them secondarily displaced with Yemen while others returned to Ethiopia to join Somali refugee Camp of Sheed Dheer near the capital city of Jigjiga, Ogaden region.

The provision of food, clothing, medicine and other humanitarian assistance was refused and they stay there more than 4 months.

The European Commission and other donors including rich Arab nations are pouring their financial aid to the established UNHCR Yemen and the EU reportedly increased its humanitarian aid by  €12 million for people affected by the crisis in Yemen.

In 2012 alone, a worksheet shared by DG ECHO says that the “EU financed to the UNHCR a total of € 2.75″ aimed to implement existing projects but only existing by name including provision of health care services, Protection Services, Vocational training and development of water supplies in Khares Camp, about 120 kilometres of the southern town of Aden.

The pressing question on the minds of many refugees and asylum-seekers is, will the agency’s donors put pressure on UNHCR Yemen to do the right things?