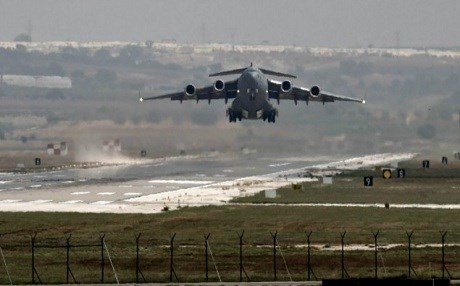 According to Pentagon, U.S. State Department coordinated on Turkey Security Related concerns. Pentagon: Decisions by the U.S. Departments of State and Defense to order family members of U.S. government workers to leave some parts of Turkey.

The regional security question is,  if the Pentagon decision can have any impact to military contingent in Djibouti with Camp Lemonnier?. The United States has the largest foreign military contingent in Djibouti with Camp Lemonnier—the sole permanent American base in Africa—hosting some 4000 personnel. The second-largest foreign military presence in Djibouti is that of its former colonial power, France, with about 1,900 troops. As for Japan, about 600 members of its Maritime Self-Defense Force rotate between a land facility and naval vessels operating from Djibouti’s ports.

The Obama administration ordered the families of U.S. military and diplomatic personnel to leave parts of southern Turkey on Tuesday and warned U.S. citizens against travel to the region amid mounting security concerns.

The Pentagon said 670 dependents of U.S. military personnel would be affected by the order to depart areas of southern Turkey, including Incirlik air base, which is used heavily in the fight against Islamic State militants.

The U.S. State Department said a small number of diplomatic families would be affected but did not give numbers. The Pentagon said 100 military dependents in Ankara and Istanbul were not affected by the departure orders because of security measures in place there.

State Department spokesman John Kirby said the move had been under consideration for several weeks, and was not the result of any specific threat and had nothing to do with the visit to Washington this week by top Turkish officials.

Secretary of State John Kerry met Turkish Foreign Minister Mevlut Cavusoglu on Monday, and Turkish President Tayyip Erdogan is due to attend a Nuclear Security Summit with other world leaders later in the week. Kirby said Kerry had discussed the security announcement with Cavusoglu at their meeting on Monday

“The decision to do this wasn’t taken lightly. It was done after careful thought and consideration, and inter-agency coordination,” Kirby told a daily presidential briefing at the State Department.

The U.S. military’s European Command said it had ordered the departure of families of personnel stationed in Adana, home of Incirlik. It said families of U.S. military personnel also had been told to leave Izmir and Mugla provinces in southwestern Turkey.

“We understand this is disruptive to our military families, but we must keep them safe and ensure the combat effectiveness of our forces to support our strong ally Turkey in the fight against terrorism,” General Philip M. Breedlove, commander of the U.S. European Command, said in the statement.

The departures do not indicate a decision to permanently end U.S. families’ presence at military facilities in southern Turkey, the statement said.

The U.S. State Department said it had ordered the departure of family members of government workers at the U.S. Consulate in Adana. Dependents of U.S. government employees in Izmir and Mugla provinces were also asked to leave.

The State Department  also warned of “increased threats from terrorist groups throughout Turkey.”