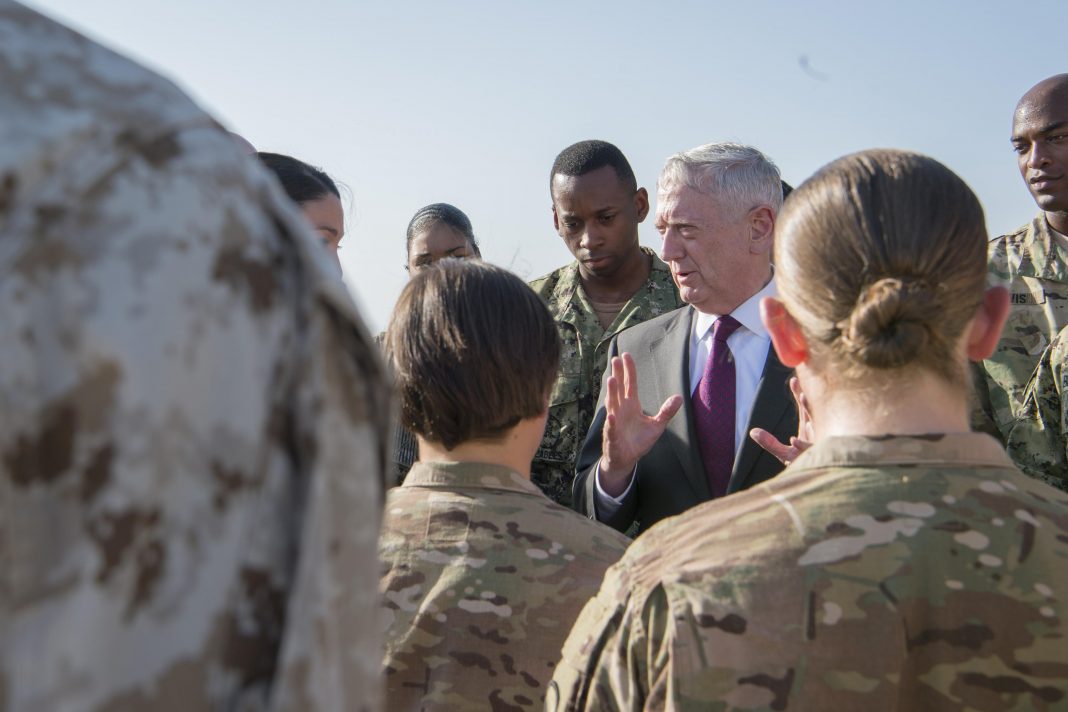 Djibouti (HAN) May 7th, 2017 – Public Diplomacy & Regional Security and defense Cooperation. Opinion article wrote by. Proffesor Alemayehu Mariam, “US doesn’t need Ethiopia in its war on terror in the Horn of Africa.”

Earlier this month, U.S. Defense Secretary Jim Mattis visited the Middle East and Africa to “reaffirm key U.S. military alliances” and engage with strategic partners.” Mattis only visited the tiny nation of Djibouti in the Horn of Africa where the U.S. maintains its largest military base. Ethiopia was conspicuously absent from the “strategic partner” lineup.

In September 2014, Barack Obama underscored the vital importance of Ethiopia in the U.S. war on terrorism. He noted that cooperation with Ethiopia “is making a difference” and that the “partnerships that we have formed with countries like Ethiopia are going to be critical to our overall efforts to defeat terrorism.”

In July 2015, during his state visit, Obama called Ethiopia an “outstanding partner” in the fight against terrorism in the Horn and a “key partner” in resolving the crises in South Sudan. He praised Ethiopia for being “a major contributor to U.N. peacekeeping efforts”, and for its unique role in “contribut(ing) more (peacekeeping) troops than any other country in Africa.”

The Mattis visit to Djibouti comes as the U.S. intensifies its military pressure on al-Shabaab, the terrorist group in Somalia with ties to al-Qaeda, which has been fighting for over a decade to establish an Islamic state and force out African Union peacekeeping troops.

Late last month, President Trump ordered airstrikes against al-Shabaab and approved a Department of Defense proposal “to provide additional precision fires” to the African Union Mission in Somalia (AMISOM) and Somali security forces.
U.S. military command for Africa (AFRICOM) announced last week that a contingent from the 101st Airborne Division has been deployed in Somalia, the first since 1994, to assist the Somali government with logistical and training support.

In 2017, there have been no public statements by the Trump administration on Ethiopia’s frontline role in the fight against terrorism. There has been no mentioned Ethiopia as ally or “strategic partner”, and no acknowledgment of Ethiopia’s role in maintaining regional stability. There has been no hint of re-opening the U.S. drone base, closed down in January 2016, used to surveil and launch strikes on al-Shabaab. Mattis’ Djibouti visit, conspicuously avoiding Ethiopia, could suggest that the Trump Administration may not view Ethiopia as an indispensable counterterrorism partner in the Horn.

The only palpable evidence of any link between the ruling regime in Ethiopia and the Trump administration appears to be vague assurances by Senator James Inhofe (R-Okla.) in February asserting, “Ethiopia is one of the strategic allies of the US in the region in peace and security and the relationship will continue under the new Trump administration.” In 2007, Inhofe zealously opposed legislation designed to promote democracy and human rights in Ethiopia.

In January, the Ethiopian regime showed its deep concern over potential changes in U.S. policy under the Trump administration by hiring SGR Government Relations, Lobbying (Washington, D.C) at a cost of $150,000 per month (for a total contract price of $1.8 million). In my letter to Trump, I argued that it made no sense for a regime whose population, some 20 million of them, is facing dire famine to spend nearly $2 million on lobbying.
Is the Trump administration signaling that Ethiopia is not a “key partner” or “critical to our overall efforts to defeat terrorism” in the Horn region?

One of the four questions on Africa the Trump transition team posed to the State Department in January may offer a glimpse into Trump’s Horn policy: “We’ve been fighting al-Shabaab for a decade, why haven’t we won?” This manifestly simple question is pregnant with profundity.

When the regime in Ethiopia invaded Somalia in January 2007, then-leader Meles Zenawi declared that it could “take a week or a maximum of two weeks” to wipe out the Islamists, “stay there for a few days to help the transitional government in preserving stability then pull out our troops.” The “Islamists” were “wiped out,” only to be replaced by the murderous al-Shabaab.

Ethiopian troops left Somalia in January 2009 leaving a good part of that country tightly in the hands of al-Shabaab and sundry other Islamist insurgents.

In 2014, 4,300 Ethiopian troops returned to Somalia as part of African Union Mission in Somalia (AMISOM). In the summer of 2016, Ethiopia began to withdraw some 3,000 non-AMISOM soldiers out of south-central Somalia following mass uprising against the ruling regime in various part of Ethiopia. Al-Shabaab swiftly recaptured and consolidated its control over a number of towns held by the departing Ethiopian and AU soldiers. Despite military pressure, al-Shabaab continues to attack AU bases and carry out suicide bombings.

The cost of fighting al-Shabaab has increased from an annual $300 million in 2009 to $900 million in 2016. The African Union (AU), which has 22,000 troops deployed in Somalia drawn from Ethiopia, Kenya, Uganda, Burundi and Djibouti, is scheduled to complete its mission by 2020.
President-elect Trump accused Obama of “losing the war on terrorism” and pledged to “bomb the hell out of ISIS” and other terrorist groups and armies. On April 14, Trump authorized dropping the largest non-nuclear bomb in the U.S. arsenal on ISIS targets in Afghanistan. Is al-Shabaab next?

The Trump administration would be wise to delink its counterterrorism strategy from the Ethiopian regime, which barely clings to power by a state of emergency decree. Ethiopia’s involvement in the domestic affairs of Somalia has made the military and political situation in Somalia worse, and resulted in documented large-scale war crimes and human rights violations. Ethiopia’s involvement is arguably the principal galvanizing cause for the radicalization of large numbers of Somali youth flocking into the of al-Shabaab and other militant Islamic groups.

The Ethiopian regime has long been a beneficiary of U.S. aid largesse for its counterterrorism cooperation. But Ethiopia’s counterterrorism role has been more self-serving. If not, “We’ve been fighting al-Shabaab (with the full support of Ethiopia) for a decade, why haven’t we won?”

Alemayehu (Al) Mariam is a professor of political science at California State University, San Bernardino, a constitutional lawyer and Senior Editor of the International Journal of Ethiopian Studies.