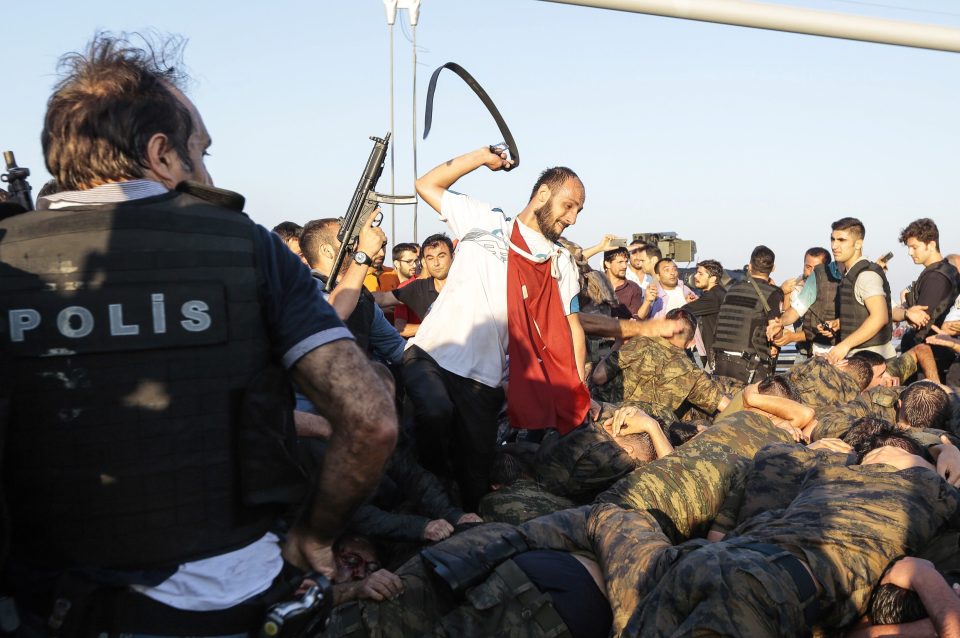 THIS is the moment soldiers blocking a bridge in Turkey held up their hands in surrender hours after staging a military coup.

The uprising of the military began last night in Istanbul at about 9pm as traffic was stopped from crossing both the Bosphorus and Fatih Sultan Mehmet bridges, as the army declared it had taken over the country.

The groups surrendered in the early hours of this morning after local people poured onto the streets to halt the military’s attempt to take power and police gained ground on the blockades.

More than 100 soldiers have now been arrested after at least 60 people died in the attempted coup.

Turkish authorities have detained 754 members of the armed forces after factions within the military used tanks and helicopters to try to overthrow the government.

The Istanbul Police Chief has now said 104 soldiers were involved in the coup with the leader named as Col Muharrem Kose, a former member of the Turkish Armed Forces.

Soldiers driving the coup clashed with protesters in the streets throughout the night after heavy gunfire in the streets of Ankara and Istanbul during the attempted coup which saw the military claim power.

Some 17 police officers and an MP are among those killed during the running battles.

Sixteen coup plotters have been killed in clashes at Turkey’s military police command.

The action continued even after the President returned to the city and the Prime Minister Binali Yildirim telling the state-run Anadolu news agency: “Things are getting better every minute”.

President Erdogan had called on the people to take to the streets to resist the coup during a Facetime interview, with the leader denouncing the coup.

Erdogan eventually made it back to Istanbul after having been on holiday in Marmaris, which he told media had been also targeted in the bombings.

He said the uprising was an act of treason with the arrests of military officers already underway.

His arrival to Istanbul comes after 12 people were injured while gathered in the Turkish Parliament and were bombed.

The MPs refused to leave the parliament with every political party coming out against the coup.

But the military action suffered several defeats with protesters forcing the soldiers to leave the Bosphorus Bridge with protesters also facing off with soldiers in Taksim Square in Istanbul.

The President said he did not believe the coup would succeed and said he believed it would be over within “a short time”.

Many people took to the streets and even held a prayer session as they refused to accept the military coup.

The coup came after the Turkish military released a statement, saying: “Turkish Armed Forces have completely taken over the administration of the country to reinstate constitutional order, human rights and freedoms, the rule of law and general security that was damaged.

“All international agreements are still valid. We hope that all of our good relationships with all countries will continue.”

In a further statement read out on the state-run broadcaster TRT, the military said it had declared martial law and imposed a curfew.

The statement said the country would now be run by a “peace council” with a new constitution to be prepared as soon as possible.