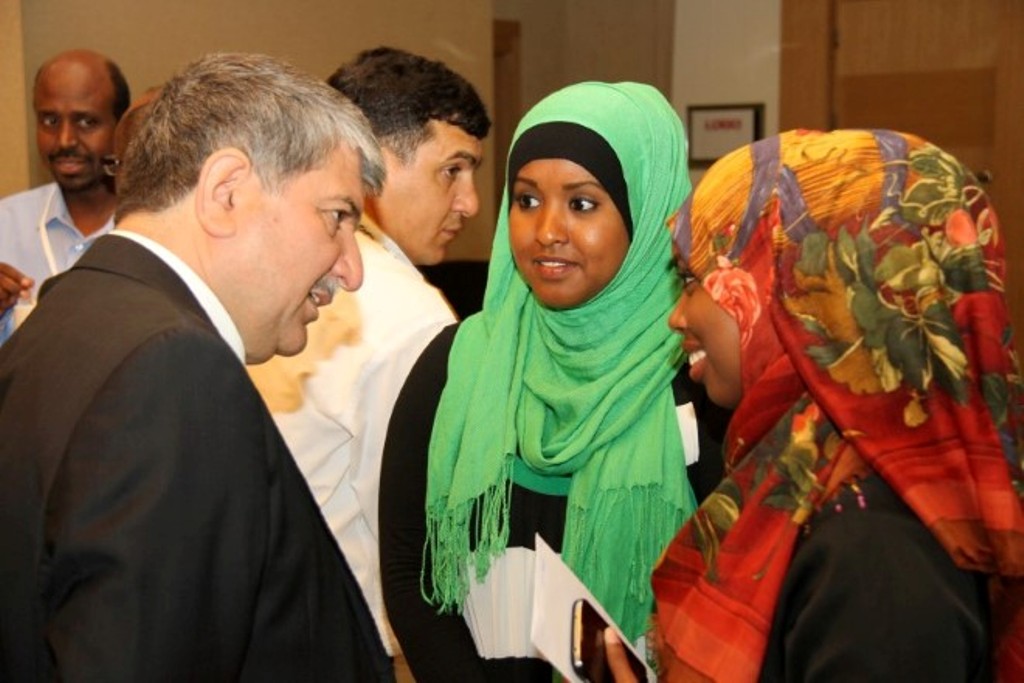 Djibouti (HAN) December 14, 2014 – Expert Analysis, Your Power & Regional Influence Magazine, opinion page by Desmond Butler.  Turkey’s defense of the Muslim Brotherhood, and the tears of Recep Tayyip Erdogan when the Egyptian security forces attempted to storm the sit-in of Rabaa al-Adawiya, proved Erdogan’s ties with the Muslim Brotherhood’s international organization and their mutual interest in restoring “the era of Islamic rule,” seen by the Brotherhood as the basis for protecting “the Islamic nation.”

In 1996, Erbakan attempted to facilitate the rise of a new Islamic power, the main Islamic focus countries are made up of Libya, Somali, Egypt, Pakistan, Djibouti, Indonesia, Nigeria, Maroco, Mouritania, Bangladesh and Malaysia.

Turkish President Recep Tayyip Erdogan was angered when Interpol issued an arrest warrant this month for Youssef Al-Qaradawi, the ideological leader of the Muslim Brotherhood. Expressing his resentment publicly at the Fifth Religious Council in Ankara Dec. 8, Erdogan said: “Look, a person who came to power through a coup is giving instructions to Interpol. Based on this instruction a step is being taken for the arrest of Youssef al-Qaradawi, president of the [International] Union of Muslim Scholars. What kind of a business is this?”

This cold relations will not only occur between Turkey and Egypt, but concern will spread to other Arab countries which are against Turkey’s hosting of Brotherhood leaders and their meetings.

Turkey, who had started quite intense humanitarian assistance for Somalia in 2011, is still maintaining this mission continuously

Desmond Butler sent this notes: Turkey is the big Muslim power that sits atop raging conflicts in Iraq, Somalia, Yemen, Egypt and Syria, so it might be expected to take a leading role in the Nato coalition announced this month to take on the Islamic State group.

Instead it has told allies that it will stay quietly behind the scenes, keeping its soldiers out of combat operations and even declining to allow Nato to use its bases or territories to launch air attacks.

Turkey’s position is complicated by its eagerness to uproot the Syrian regime of Bashar al-Assad, which led to tolerance of anti-Assad Islamist fighters taking refuge on its side of the Syrian border — and may have given the Islamic State group some breathing room in Turkey. More recently, it has been forced to confront the threat that the group posed.

But while expressing public support for Turkey, Nato allies are quietly saying they would like more action from their ally.

They would chiefly like to see Turkey tighten its border controls, stem the flow of fighters transiting Turkey from Western Countries and the Middle East, and crack down on oil smuggling from Syria that finances the Islamic State group. They could also benefit from closer intelligence cooperation and possibly the use of Incirlik Airbase in southern Turkey as a base from which to launch strikes against the group.

Western governments have been alarmed by a trend of the Islamic State group managing to smuggle Iraqi and Syrian oil across its borders. Turkey has cracked down, but analysts say that Turkey has simply not been able to police the smuggling across more than 750 miles of border with Iraq and Syria.

Both US Secretary of State John Kerry and Secretary of Defence Chuck Hagel were in Ankara last week on successive trips to press Turkey on its role, meeting with officials, including President Recep Tayyip Erdogan. But they failed to win pledges for support of combat operations — at least publicly. Both expressed understanding for the delicate position Turkey was in.

Turkey also declined to sign a US brokered statement by Middle Eastern countries last week repudiating the Islamic State group and pledging to fight it.

Along with fears over the fate of the 49 hostages seized from the Turkish consulate in Mosul, Turkey also finds its hands ties on fighting the Islamic State group because of its three-decade long conflict with the Kurdish minority that has claimed tens of thousands of lives. Last year, Kurdish rebels declared a ceasefire and began withdrawing fighters from Turkey into bases in northern Iraq, but tensions have risen recently as the Kurdistan Workers’ Party, or PKK, has accused Turkey of not boosting Kurdish rights quickly enough.

Government officials say they now see signs that Kurds from Turkey are crossing the border to help PKK militants in Iraq and Syria fight the Islamic State group. The government may also have concerns that Turkey’s Kurds, bolstered by Western arms and emboldened by battlefield success, could harden their demands on the Ankara government.

-Turkish President Recep Tayyip Erdogan slammed Egypt for requesting an arrest warrant from Interpol for Youssef al-Qaradawi, the ideological leader of the Muslim Brotherhood.
In interviews, Turkish officials, speaking on condition of anonymity because they were not authorised to comment, say that they took steps against Islamic State group months ago when they recognised it as a threat to Turkey. They say that Western countries were slow to respond to Turkish requests for lists of suspected Islamic State group sympathisers, but Turkish authorities have now assembled a watch list of more than 6,000 names.

Teams of security officials operating at Turkish airports and bus stations have interrogated more than 500 people over the last four months and have deported 107 to their countries of origin, according to one official in the Turkish prime minister’s office. Officials also say they are fighting oil smuggling, but face challenges across a more than 900 kilometre (550 mile) border with Syria.

Sinan Ulgen, a former Turkish diplomat who chairs the Istanbul-based Centre for Economics and Foreign Policy Studies, concedes that earlier in the Syrian conflict, Turkey was slow to recognise the threat from the Islamic State group, looking the other way because what he called “strategic blindness”. He says that Turkey used every instrument it had to promote regime change in Turkey, including turning a blind eye to jihadists. But it has since changed its policy.

“The fundamental reason the behaviour changed,” he said, “is the fact that Ankara realises much more clearly that [the Islamic State group] is a security threat to Turkey. Published in Dawn.