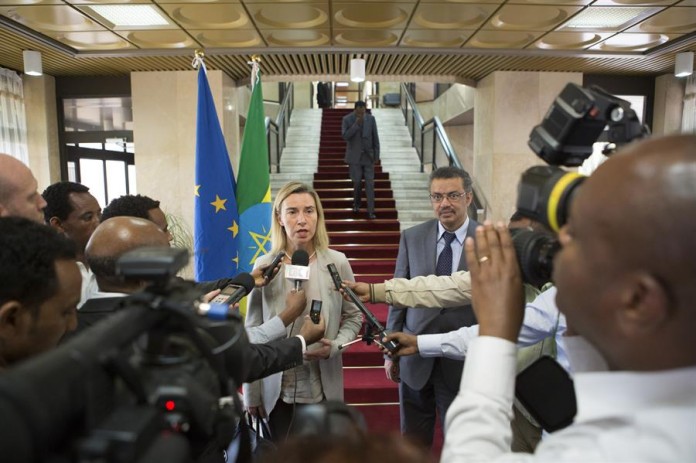 From Foreign Minister Dr. Tedros meets High Representative for Foreign Affairs of EU, Ms. Federica Mogherini at his office today in Addis. The two sides discussed on issues of regional peace and security, migration, and the positive steps taken by the government of Ethiopia in solving internal security problems.

Somalia has agreed to a one-year monitoring program with the International Monetary Fund, as the nation tries to rebuild a functioning state amid an Islamist insurgency.

Update: The staff-monitored program, which doesn’t involve loans, aims to help Somalia improve budget planning, boost oversight of banking and money-transfer businesses, clear its arrears and conduct currency reforms, the IMF said in a statement on Wednesday. It paves the way for “normalizing” the fund’s relationship with Somalia after more than two decades of war, it said.

Of the total amount, USD 80 million will build the first phase of an irrigation project in Saiss, near Fez and Meknes. Another USD 50 million are earmarked for the purchase of medical devices for public hospitals. The last 100 million will allow for the completion of small to medium-sized construction projects in the kingdom.

5- Deadly Floods Hit Ethiopia: Jigjiga and Harar Area
From Seasonal rains have come early to parts of Ethiopia, causing deadly floods in places. Addis Ababa recorded more than a quarter of the April average rainfall earlier this week with 23mm of rain falling on Sunday. The entire month would normally expect 86mm.

Harar regional state reported 54mm of rain in the following 24 hours. Meanwhile, further south in the Great Rift Valley, Awassa had 49mm in the same period. Update: The majority of deaths occurred in the city of Jijiga in eastern Ethiopia where the river burst its banks. It left 23 people dead and 84 injured.

Mr. Adan Muse Jibril, a representative of the Somaliland administration. Discussions focused on enhancing the partnership in the fight against al-shabaab and strengthening cooperation concerning Berbera Port.

Prime Minister Hailemariam Desalegn said Ethiopia and Algeria will cooperate in the fight against terrorism.

The Premier made the remark while conferring here yesterday with Minister of Maghreb Affairs, African Union and Arab League Abdelkader Messahel. The meeting also focused on boosting bilateral relations and was an opportunity for the two officials to examine regional issues of common interest.

AQAP has overshadowed its younger sibling with its grassroots approach, providing essential public services to gain the trust of the local population. The group has also been willing to share power with local governing institutions before it establishes its own so-called caliphate.

“ISIS and al Qaeda [have] different [approaches]. ISIS thinks that [it] will brutalize [a population] into submission. Al Qaeda knows that some people are turned off by this brutality,” Thomas Joscelyn, a senior fellow at the Foundation for Defense of Democracies and senior editor of the Long War Journal, told International Business Times. “The entire al Qaeda model is to get as local as possible and embed with the local population.”

9- Russia, China Are Greatest Cyberthreats, but Iran Is Growing
According to the Navy admiral in charge of the military’s Cyber Command, Russia and China present the greatest cyber security threat to the United States, but Iran is working to increase its capabilities. Adm. Michael Rogers told the Senate Armed Services Committee that U.S. Cyber Command will have 133 fully operational cyber mission teams by September 2018. Almost 100 teams are already conducting cyberspace operations, he said. Roger said his major cybersecurity concerns include attacks against critical infrastructure in the United States and the possibility that cyber hackers may begin breaching networks and changing data, rather than just reading it or stealing it.

Privacy advocates are touting the Panama Papers as an example of how encryption can protect whistleblowers and other vulnerable individuals. Dozens of researchers and writers relied on anonymous chatting platforms and encrypted email to protect the still-unknown whistleblower and keep under wraps the leaked documents.

The Trump Hotel Collection said on April 4 that it is working with the U.S. Secret Service and U.S. Federal Bureau of Investigation to investigate a possible payment card breach, its second one in less than a year. “Like virtually every other company these days, we are routinely targeted by cyber terrorists whose only focus is to inflict harm on great American businesses,” said Eric Trump. “We are committed to safeguarding all guests’ personal information and will continue to do so vigilantly.” Computer security writer Brian Krebs reported that cards were used at several Trump Hotel properties over the last two or three months. Last October, the Trump Hotel Collection said malware infected payment card terminals and front desk terminals for about two weeks starting in May 2015.

South Korean officials on Tuesday said they have determined that North Korea is now capable of mounting a nuclear warhead on its medium-range Rodong ballistic missile. The weapon could reach all of South Korea and most of Japan. The announcement comes after North Korea claimed it had “standardized” nuclear warhead small enough to be carried by ballistic missiles. South Korea provided no evidence of how they made the determination that North Korea has developed these capabilities. Even if such advances have been made for medium-range missiles, most analysts in the US and South Korea say the North may still be years away from building a nuclear-tipped intercontinental ballistic missile that could target the continental United States. The country has yet to test a long-range missile, and there are still questions about whether Pyongyang has even managed to develop nuclear-tipped missiles like South Korea claims. Despite this skepticism, US military officials believe it is necessary to assume the North “has the capability to miniaturize a nuclear weapon and put it on an ICBM.”

13- Amtrak Crash Probe Indicates Basic Safety Measure Wasn’t Deployed
An investigation into the recent Amtrak crash in Pennsylvania indicates track workers did not deploy a decades-old safety measure that experts say could have prevented a collision that killed two workers and injured more than 30 passengers, people familiar with the matter said. Crews performing work on a stretch of Amtrak’s heavily traveled Northeast Corridor on April 3 apparently did not put in place what is known as a supplemental shunting device, in apparent violation of Amtrak’s own worker-protection rules, these people said. The device, which is clamped to the track, completes an electrical circuit to alert the signaling system that the track is occupied. Had a shunt been used, Amtrak’s computerized collision-avoidance system known as positive train control, or PTC, could have prevented the accident, said Steven Ditmeyer, a former federal railroad official and Virginia-based consultant who has advised the U.S. government and transportation industry groups but not Amtrak. Amtrak rules do not require the devices in every case, but they are generally required as backup protection when maintenance equipment obstructs active track. Human error—and whether Amtrak employees skirted safety procedures—appears to be one focus for investigators, people familiar with the matter said. An Amtrak spokesman declined to comment, citing a continuing investigation led by the National Transportation Safety Board. An NTSB spokesman also declined to comment.

The FBI will help state and local law enforcement agencies to unlock seized iPhones when possible, according to a memo sent to local authorities around the country. “As has been our longstanding policy, the FBI will of course consider any tool that might be helpful to our partners,” said the letter, which was obtained by multiple news outlets. “Please know that we will continue to do everything we can to help you consistent with our legal and policy constraints.” Arkansas officials last week directly sought the FBI’s help with an iPhone and iPod at the center of a homicide case. While security specialists want the government to reveal the flaw it exposed in decrypting the device, the FBI has yet to comply. The fear is that this flaw will leak to criminals, which could put millions of phones in danger. The Department of Justice has not commented on its method.

15- CIA Left Bomb Behind on Virginia School Bus
After a “routine training exercise” with police dog units at a Loudon County, VA, school last week, training explosives were “inadvertently” left behind in one of the school buses, the U.S. Central Intelligence Agency said in a statement. The device was not discovered until the bus underwent a routine check on March 30, at which point it had ferried more than two dozen elementary and high school students to and from school, according to Loudon County Public Schools spokesman Wayde Byard. The CIA stated that “explosives experts have confirmed that the training material did not pose a danger to passengers on the bus.” According to Byard, the small, black device had no detonator or triggering mechanism. Nevertheless, the CIA took “immediate steps to strengthen inventory and control procedures in its K-9 program,” in the wake of the slip-up, it claimed. The agency also promised to lead a “thorough and independent review” of its dog training program.

British  Prime Minister David Cameron, his wife and their children will not benefit in the future from any offshore funds or trusts, a spokesman said on Wednesday as the British leader faced more questions over family tax affairs.

Cameron’s late father, Ian, was among the tens of thousands of people named in leaked documents from Panama law firm Mossack Fonseca that showed how the world’s rich and powerful are able to stash their wealth and avoid taxes.

After having at first described it as a private matter, Cameron’s office said on Tuesday that he and his family did not benefit from any such funds at present. Cameron also said he did not own any shares or have any offshore funds.

According to SAMIC head Mohamed Al-Mady, the factory complex was built with the help of RDM and will specialize in the production of 60mm, 81mm and 120mm mortars as well as 105mm and 155mm artillery shells, mainly for use by the Saudi defense forces.