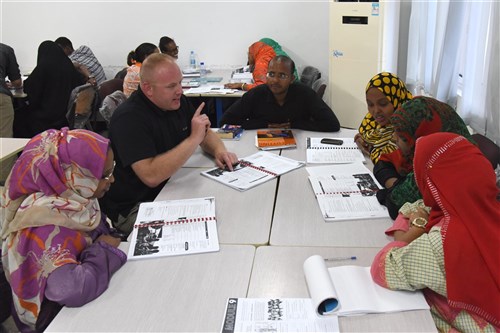 By increasing the skills of the local populace, civil affairs helps create an environment that enables continued economic growth and sustained broad-based development.

“We aren’t here to force our solutions onto our African partners,” said Stephens. “We try to help them sustain themselves.”

The class is a networking opportunity for both sides of the conversation in both a professional and personal capacity.

“When [U.S. military members] come here, they become friends with us,” said Fatouma Djamh, Diplomatic Institute English language student. “It is interesting to know what their life is like, how they live in Djibouti and what they do in our country.”

In addition to making acquaintances, military members gain a sense of accomplishment for helping out the local populace.

“A lot of the people who come here want to use English to improve their lives,” said U.S. Army Maj. William Jones, 403rd Civil Affairs Battalion chief. “It gives me fulfillment being a part to make their lives better.”

The knowledge gained in these exchanges can expand beyond the bounds of the classroom and impact others in the community.

“I have children, and I want to teach them to speak English,” said Djamh. “I want for my children to go to university abroad. If they don’t speak English, it may be hard for them.”

Helping Djiboutians learn English enables them to increase their knowledge, potentially elevating their position in the community.

“A lot of them want to learn English because they believe it will make their lives better,” said Jones. “It may give them economic opportunities they never had before.”

The course isn’t purely about education; it is a chance for military members and Djiboutian locals to learn about each other on a personal level by sharing similarities and differences.

“It was fun to talk with them about our lives,” said Stephens. “They want to know more about us and what we do, where we’re from or what kind of pets we have. They are so interested in us, and I’m fascinated with them.”