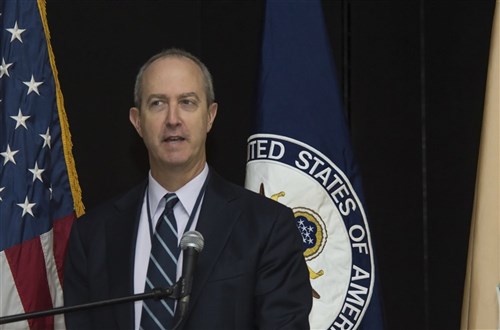 The EASSC is the only conference between U.S. Department of State and U.S. military representatives dedicated to aligning military and political priorities for East Africa.

More than 70 U.S. embassy representatives from each East African country and organizations including the African Union, U.S. Africa Command, and AFRICOM components attended the event to kick start the process of synchronizing and prioritizing all activities in East Africa.

“Events that bring together the diplomatic and military leaders from the U.S. and the region are incredibly valuable because we’re all working on the same set of problems, and they’re not easy issues,” said Amb. Tom Kelly, U.S. Ambassador to the Republic of Djibouti.

The ambassador said we can achieve progress by engaging in informal discussions, and the conference provides, “the luxury of us all being here together to talk about the tough issues.”

“All of these efforts are focused on achieving a single goal: operationalize the Theater Campaign Plan by synchronizing the combatant commander’s primary ways with all available means to achieve our end states and execute our enduring tasks,” said U.S. Army Maj. Gen. Mark Stammer, CJTF-HOA commanding general.

The conference encompassed several working group sessions that consisted of discussions on some of AFRICOM’s major priorities, known as lines of effort, to include neutralizing Al-Shabaab, interdicting illicit activity and building the peace-keeping capacity of African partners.

Additionally, the conference consisted of discussion panels and briefings that addressed a spectrum of topics including upcoming political elections, regional threat analysis and training assistance activities to secure the best outcome for the region.

“A safe, stable and secure Africa is in our national interest,” Stammer said. “Our work together helps strengthen the defense capabilities of African states and regional organizations to enable them to address the security threats more effectively.”

The conference provided an opportunity for attendees to better understand the benefits of a regional approach to African security instead of strictly country-focused planning.

“This conference is important because it is easy to lose focus of regional priorities when members are settled into country,” said U.S. Navy Capt. Kimberly Walz, Security Force Assistance Division deputy director. “We often forget how individual countries and projects in those countries affect East Africa as a whole. This is a way to realign and recalibrate.”

Much of the conference gravitated around discussing the management of resources and assets dedicated to supporting operations in East Africa.

“Each year funds are allocated for the entire East African region,” Walz said. “Everyone has an opinion on how that budget should or shouldn’t be spent, while often overlooking the region as a whole.”

As the conference came to a close, Amb. Alexander M. Laskaris, AFRICOM deputy to the commander for civil-military engagement, challenged the audience to take what they learned during the two-day conference and couple it with lessons learned from the past.