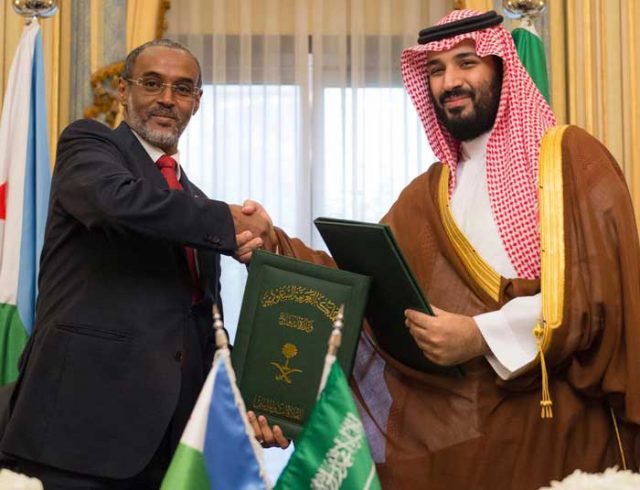 Riyadh (HAN) 27 April, 2017 – Public Diplomacy & Regional Security for Stability. By Fatah Al-Rahman Yousef (aawsat).
Djibouti’s Defense Minister Ali Hasan Bahdon stressed that a military and defense agreement signed between Saudi Arabia and Djibouti in Riyadh on Wednesday lies in the interest of the two nations and the region’s security.

Djibouti’s Defense Minister Ali Hasan Bahdon told Asharq Al-Awsat that “Saudi Arabia is the backbone of stability in the region but is being targeted for this role.”

Djibouti’s Defense Minister Ali Hasan Bahdon said Djibouti is cooperating with Riyadh to monitor any military intervention or weapons smuggling from Iran to Yemen as well as Oman to Somali coastal area through Yemeni waters.

Asked to evaluate military and defense relations between Djibouti and Riyadh, Bahdon said:

“I met Custodian of the Two Holy Mosques King Salman bin Abdulaziz and handed him a letter from Djibouti’s President Ismail Omar Guelleh on bilateral relations and his vision on topics of mutual interests.”

“We signed a military agreement in the field of cooperation and defense with Deputy Crown Prince Mohammed bin Salman, Second Deputy Premier and Minister of Defense. We also discussed possible cooperation between the two countries in various sectors,” he added.

He also rejected the use of chemical weapons and targeting civilians in Syria or any other place in the world.
He revealed that Djibouti has welcomed Yemenis in their thousands and provided all it can to help them. “We never considered them as refugees. We considered them our brothers and guests.”

Asked to describe ties between Djibouti and the US, Bahdon answered that cooperation comes in line with the strong relations between the two countries.

“Since 2001, Djibouti has acted to fight terrorism and opened its ports to receive international forces working for the same purpose, as a response to UN Security Council and General Assembly resolutions,” he said.

“There is a US base (AFRICOM) in Djibouti because it has a strategic location in the region,” he said.