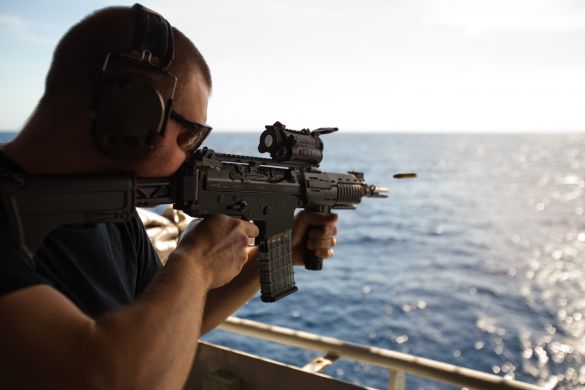 Djibouti (HAN) May 12, 2010. Public Diplomacy & Regional Security News. By. David Cairns. Somali pirates reported dead after being set adrift without navigational gear. Ten captured Somali piracy suspects are thought to have died after the Russian navy released them in an inflatable boat without navigational equipment, Russian media are reporting. An unnamed source told Russia’s Interfax news agency yesterday: “It seems that they all died.”

The alleged pirates seized the container ship Moscow University – carrying $50m of crude oil – on May 5 in the Gulf of Aden. Marines from the Russian warship Marshal Shaposhnikov, which patrols the pirate-infested Gulf as part of an international force, stormed the ship the following day, freeing the unharmed crew.

Initially, Russia said the suspected pirates would be taken to Moscow to face trial, but Colonel Alexei Kuznetzov later announced that “imperfections in international law” meant they would instead be released.

An international maritime treaty means suspected pirates can be tried in the home countries of their victims – but some governments have been put off this course of action for fear that convicted pirates might not return to Somalia after serving out their time in jail. Kuznetzov seemed to echo this when he said: “Why should we feed some pirates?”

Russian media reported that the 10 men were set adrift in a boat with no navigational equipment, and that contact was lost with the boat’s radio beacon within an hour. However, Commander John Harbour, a spokesman for the EU naval force in Somalia, told the BBC that the loss of navigation equipment would not necessarily be critical and that the signal from the beacon could vanish if the battery ran out or it entered a satellite blind spot.

One Somali news website reported a conversation with an unidentified pirate who claimed the men were indeed dead – but said they had all been shot before they were loaded into the skiff.  There is no evidence for this account, and photographs from the Moscow University seem to support Russian reports that marines killed one pirate in a firefight, and took the other ten captive.

Commander Harbour observed that the Russian navy was within its rights to release the men as it did – and it is probable that the boat they were returned to was one of their own. He congratulated the Russians on a “brave” and successful action against piracy.

The Russian announcement that the men were probably dead led immediately to a tit-for-tat threat from the pirates. Somali media reported one pirate as saying: “In future, if we capture Russians they will meet the same fate as those they executed.”

If this sabre-rattling translates into deaths it will reflect a recent escalation in violence in the region, as reported previously on The First Post, and could endanger the many hostages taken by the pirates, including British couple Paul and Rachel Chandler, held captive since last autumn.

Previously, the pirates have always treated their hostages well. In part, no doubt, this is to ensure ransom payments – but it may also reflect the fact that some do not want to see themselves as pirates and have turned to hostage-taking as a last resort to escape desperate poverty in a violence-riven country with no functioning government.

In January, Rachel Chandler told a French journalist: “We have not much time left and are being badly treated.” There have been no statements from the couple since then.