Home Djibouti Djibouti: Russia or Turkey "Which one is a Key Question in Regional... 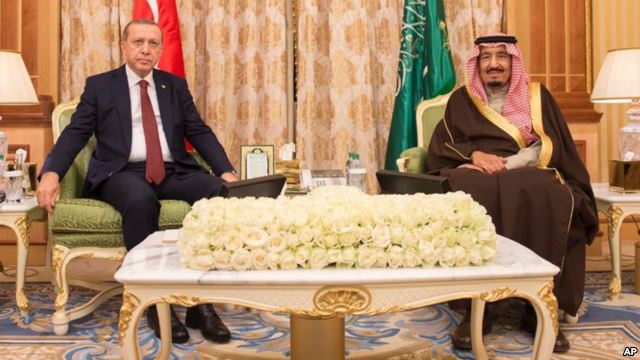 But Ankara and Riyadh are united not only by the desire to change the government in Syria; they could have a common enemy in Russia. “In recent years, relations between our countries were a success not seen in previous years,” Erdogan said in an interview with the Al Arabiya television network ahead of his visit to Saudi Arabia. “Now, major developments are happening in the military, political, economic, trade and cultural fields. And I am confident that the visit will further strengthen our cooperation,” he said.

Ankara and Riyadh have similar views on the Syrian settlement, with both countries insisting on the resignation of Bashar al-Assad and unwilling to agree even to his participation in leadership during the period of transitional government. Erdogan recently reiterated that he would not sit down with Assad at the negotiating table because he had reservations about his legitimacy. A similar opinion is held in Riyadh. As for the military forces, it is emphasized that the Turks and the Saudis support the so-called moderate opposition, which includes a variety of anti-Assad groups.

Erdogan and King Salman will discuss a wide range of political issues during the Turkish president’s visit to Saud Arabia, including Iran’s influence. Earlier, Erdogan said that he hoped that the “differences with Tehran will not affect the good relations between the two states,” but it is known that there are a number of insoluble contradictions between the two countries. Ankara and Tehran hold diametrically opposed positions on most of the regional conflicts.

The same situation exists in relations between Iran and Saudi Arabia, so the conflict in Yemen has effectively turned into a regional confrontation between the two states. The leaders of Turkey and Saudi Arabia are also planning to discuss the question of interaction with Egypt, with which Ankara has tense relations. It is known that Erdogan does not support president-elect Sisi. Turkey provided the support for the Muslim Brotherhood movement, which came to power in Egypt in 2012 during the “Arab Spring.”

These regional issues also cannot be approached without discussing the role of Russia, since Egypt and Iran are among Moscow’s priority partners at this stage. The Russian Federation supports the Egyptian president. But Iran, like Russia, stands for Assad retaining power. Saudi Arabia recently announced its own coalition to solve the Syrian conflict. The group features 34 countries, including Jordan, UAE, Pakistan, Bahrain, Turkey, Tunisia, Sudan, Somalia, Palestine, Qatar, Kuwait, Lebanon, Libya, Malaysia, Egypt, Nigeria and Yemen. The alliance has also been supported by Indonesia. However, there is so far no talk of any active role in hostilities.

‘They will conspire against Russia’

“There are three countries in the world whose life we spoiled by starting a counter-terrorist operation in Syria. They are Turkey, Saudi Arabia and Qatar,” said political analyst Yevgeny Satanovsky, president of the Middle East Institute in Moscow. “Someone had made plans to build a new Ottoman Empire, the other – a regional caliphate. Russia has launched an operation against ISIS in Syria and, to put it mildly, corrected these plans,” he said.

“The other day, the Russian forces bombed one of the main terrorists in Syria – Zahran Alloush, who was orientated toward Saudi Arabia. Now, the Saudis and Turks will conspire against Russia. All these countries have de facto supported terrorists in Russia. Throughout the 1990s, we fought them in the Caucasus,” said Satanovsky. However, he believes that Riyadh and Ankara are too weak to resist Russia, and will not really be able to do anything significant.

“The establishment of the so-called anti-terrorist alliance led by Saudi Arabia and featuring Turkey is of an anti-Russian nature,” Satanovsky said. “But the fact is that there is no alliance. There is a terrorist alliance featuring Saudi Arabia, Turkey and Qatar. It does work very well, and we can see the results of its work in Syria and Iraq. All that Turkey and Saudi Arabia do has always been and is against Russia.” Satanovsky went on to suggest that “Riyadh and Ankara can begin to coordinate the actions of the Caucasian underground in Russia, to prepare acts of terrorism.”

Political scientist Azhdar Kurtov, the chief editor of the magazine Problemy Natsionalnoi Strategii (Problems of National Strategy) published by the Russian Institute of Strategic Studies, said in comments to the online newspaper Vzglyad that, despite having a strategic alliance against Russia, Turkey and Saudi Arabia also have fundamental differences. “The policy of Turkish President Erdogan aims to create a new Ottoman Empire – the leader in the Middle East. This, in turn, naturally meets the opposition of Saudi Arabia, which itself has aspirations to regional leadership,” he said.

The current differences stem from history, Kurtov noted. “For a long time, the current territory of Saudi Arabia was ruled by the Ottoman Empire, and the Turkish sultan was also the spiritual leader – the Caliph. Riyadh, accordingly, does not recognize it, as it believes that the Caliph can only be an Arab, a descendant of the Prophet Mohammed,” he said. Sources: RBTH