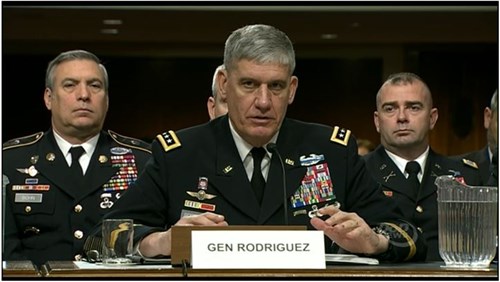 “Our engagement now can assist our African partners in realizing their potential and gaining the capability to solve African problems,” said U.S. Army Gen. David M. Rodriguez, commander of U.S. Africa Command, in written testimony to the Senate Armed Services Committee. “African solutions to African problems are, in the long run, in the best interest of Africans, Americans, and indeed the world.”

Rodriguez outlined the command’s strategic risks; African and U.S. security concerns, including the threats posed by from al-Shabaab, Islamic State, Boko Haram and other violent extremist organizations; and the opportunities that exist on the continent.

He told lawmakers that along with diplomatic, defense, and development partners, AFRICOM is helping to “build African institutions capable of deterring the spread of extremism, protecting their populations, enabling economic prosperity, and expanding the rule of law and human rights.”

According to the General, Africa is a “complex and dynamic” continent and faces challenges ranging from a massive population boom to a limited access to democratic participation and employment.

Together, the challenges create an environment ripe for the expansion of violent extremism requiring a comprehensive approach that employs diplomacy, defense, and development to address the root causes of extremism.

“Our effectiveness is strengthened by close coordination with interagency partners, including the Department of State and United States Agency for International Development (USAID), who possess a strong understanding of African political dynamics, cultural contexts, and long-standing strategic partnerships,” he explained.

The command has put an emphasis on its operational requirements and those of its component commands, with Rodriguez citing an increase in joint operations, major joint exercises, and security cooperation activities in fiscal year 2015 from fiscal year 2014.

In East Africa, Rodriguez highlighted the efforts of the African Union Mission in Somalia (AMISOM) forces in their operations against the al-Qaeda affiliated terror group al-Shabaab, but contends that al-Shabaab “remains a continuing threat to U.S. persons and Western interests.”

“Under-governed areas outside the reach of the Federal Government of Somalia will continue providing al-Shabaab with territory in which it can evade security forces and continue targeting East African regional governments and security interests as well as European and American interests,” he explained.

Poor governance, deteriorating security situations and political tensions will continue to point to a challenging environment in the region.

In North Africa, Rodriguez said that the priority continues to be to contain Libyan instability and to counter violent extremist organizations. Terrorist groups like the Islamic State-Libya (IS-Libya) represent a serious and growing threat to U.S. persons, the international community and interests throughout the region.

“Libya’s insecurity, combined with porous land and maritime borders, has negative consequences for its people, its neighbors, Europe’s southern flank, and our peace and security objectives in Africa and the Middle East,” he said. The December 2015 agreement to form a Libyan Government of National Accord (GNA) is an important step toward stabilizing the country.”

Rodriguez explained that the continued absence of central government control will continue to perpetuate violence, instability, and allow the conditions for violent extremist organizations to flourish until the Government of National Accord (GNA) and appropriate security forces are operational within Libya.

A coordinated, multinational approach to support improvements in governance, security, and development is required for improving regional security, he said. To that end, AFRICOM continues to collaborate with the Sahel Multilateral Planning Group—United States, United Kingdom, France, Canada, and Italy—to synchronize allied activities in the Sahel Maghreb region to strengthen multilateral relationships in the fight against violent extremist organizations.

“We are watching carefully for signs that the threat posed by Boko Haram to U.S. persons is growing as a result of the group’s alignment with ISIL,” Rodriguez said.

He further explained that countering adaptive threat networks, like Boko Haram, across a transnational battle-space, requires a networked, regional approach. He praised the efforts of the Multinational Joint Task Force (MNJTF); allies and partners such as the African Union, France, the United Kingdom, the European Union; and the Department of State for engaging in the counter-Boko Haram effort.

Rodriguez also praised the efforts of the African Union Regional Task Force in Central Africa for countering the efforts of the brutal Lord’s Resistance Army (LRA) led by Joseph Kony. He testified that through the combined efforts of military forces, civilian agencies, and non-governmental organizations, the Lord’s Resistance Army (LRA) no longer threatens regional stability, and its capacity to harm civilian populations has diminished.

“Today, we estimate less than 200 Lord’s Resistance Army fighters remain, and communities are better prepared to protect themselves,” Rodriguez said. “While continuing to work to eliminate the threat posed by the LRA, (AFRICOM) can also now begin to focus on countering illicit activities that support the LRA and other destabilization influencers in the region.”

Africa continues to receive attention from those who “wish to further their own objectives,” Rodriguez noted.

Citing China’s focus on obtaining natural resources and both China and Russia’s desires to sell weapons systems on the continent, the commander said that both are striving to gain “soft power” in Africa to strengthen their power in international organizations.

He also noted the “non-allied and non-state actors” that look to the information environment in an effort to exploit networks for their own gain. “They exploit vulnerabilities in partner, allied, and U.S. government networks and invest heavily in internet and social media expertise to spread ideology and reach prospective recruits.”

Despite the many factors that drive instability on the continent, Rodriguez noted that the collaboration and work being done between AFRICOM and African partners, international, multinational, interagency and other partners continue to work together to “further the common objectives of a safe, stable, and prosperous Africa.”

“We also work in concert with international and interagency partners to build defense capabilities, respond to crisis, and deter transnational threats,” he said. “African nations are working together to develop solutions to the threats and challenges confronting them, and our allies and partners will continue to support their efforts.”