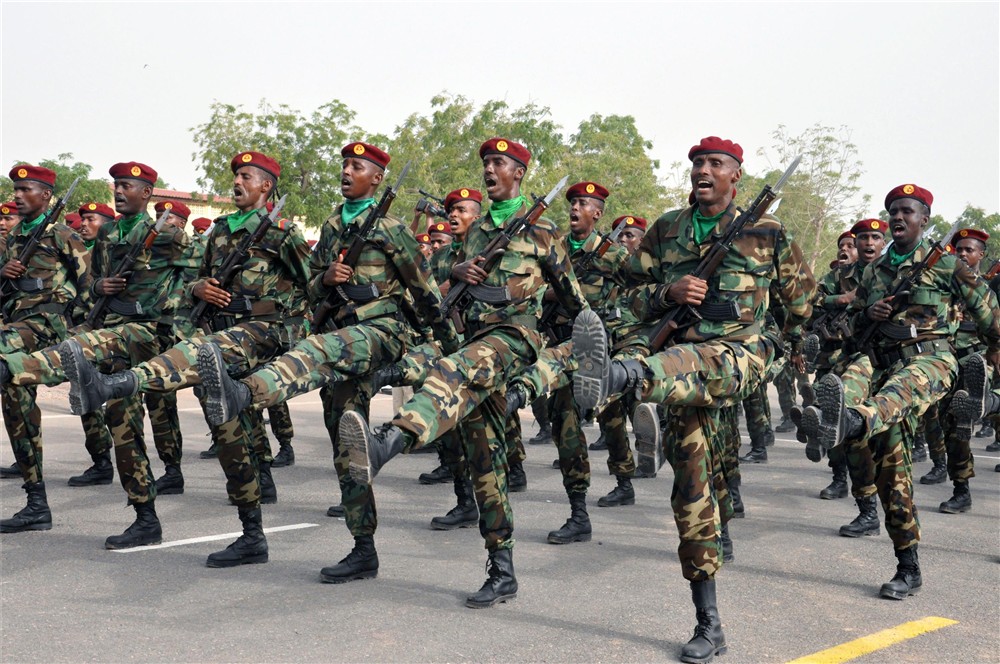 1- Regional Stability: Somali President Tells US Teen It’s Safe to Visit Somalia
Answering a U.S. teenager’s question about vacationing safely in Somalia, President Hassan Sheikh Mohamoud said, “You can come back to Mogadishu — nothing will happen to you.” Mohamoud answered questions about terrorism and the Somali diaspora in a town hall hosted by VOA.

2- Threat Regional Investment: Foreign Firms Attacked’ As Ethiopia Protests Continue
Protesters in Ethiopia have attacked foreign businesses, according to the owners of a flower firm. The Dutch company said crowds of people in the Oromia and Amhara regions torched flower farms as they targeted businesses with perceived links to the government.

According to the report published by “INDIAN OCEAN Newsletter” and African Intelligence Sources, “Ethiopian army watches over Afar area”

4- Why US, Britain are key to ending Yemen horror
Saudi-led coalition regrets aid group’s withdrawal, “This latest incident shows that the current rules of engagement, military protocols and procedures are inadequate in avoiding attacks on hospitals, and need revision and changes,” Joan Tubau, the General Director of MSF wrote at the time.

5- Diplomacy in Action: How Turkey’s advance into Syria impacts Israel
From creating an additional reason for Ankara to mediate Israel & Hamaz, to demonstrate again a loss of US weight in the region, Turkey’s thrust into Syria will have serious ramifications. President Erdogan reconciled with Israel. He reconciled with Russia. He quarreled publicly and bitterly with both the US and the European Union.

Thousands of women have now joined a social media campaign to pressure the Saudi Arabian government to stop enslaving and infantilising women under the archaic institution of male guardianship.

The campaign, initially promoted by Human Rights Watch in light of its recent report into the practice, began under the hashtag #TogetherToEndMaleGuardianship.

7- The Death of President Islam Karimov of Uzbekistan may open dangerous period In Central-Asia.
Islam Karimov, who crushed all opposition in the Central Asian country of Uzbekistan as its only president in a quarter-century of independence from the Soviet Union, has died of a stroke at age 78.

One of the world’s most authoritarian rulers, Karimov cultivated no apparent successor, and his death raised concerns that the predominantly Sunni Muslim country could face prolonged infighting among clans over its leadership, something its Islamic radical movement could exploit.

“The death of Islam Karimov may open a pretty dangerous period of unpredictability and uncertainty in Uzbekistan,” Alexei Pushkov, head of the Russian parliament’s foreign affairs committee, told the Tass news agency. President Islam was known to shout and swear at officials during meetings and it was widely rumored that in bursts of anger he would beat officials and throw ashtrays at them.

8- NSA Provided Key to Finding Paris Attack Suspect
The National Security Agency provided critical intelligence to Belgian officials that led to the arrest of suspected Paris terrorist Salah Abdeslam, according to a report released on Aug. 22. Two Belgian officials said that the U.S. agency was consulted about the cellphones of people who attended the funeral of another Paris attacker, Chakib Akrouh, in March, which eventually led officials to Abdeslam. Together, the NSA and Belgian officials “grabbed all the information about all the phones present [at the funeral],” one security official said. The agency was reportedly able to single out one phone in particular, which belonged to a known associate of Abdeslam who was filming the funeral. Abdeslam, who is the sole surviving suspect of the November violence in Paris, was arrested in Brussels in March, and is now in a Belgian prison.

9- How Russian Hackers Could Actually Tip an American Election

Voting technology experts such as Princeton University researcher Andrew Appel have long warned of endemic insecurity in U.S. election systems, including hackers’ ability to delete or alter data on voter rolls to manipulate electoral outcomes. “There are computers used in all points of the election process, and they can all be hacked,” Appel says. “So we should work at all points in that system to see how we make them trustworthy even if they do get hacked.” Rice University professor Dan S. Wallach points to the destruction of voter registration databases as another way to sow chaos, and this threat has sparked considerable concern with recent allegations of Russian intrusions into several states’ voting systems. Experts agree the most secure voting systems combine optical scanners and paper ballots voters fill out manually, creating both a paper trail and an electronic count. Systems that only tally digital records offer numerous hacker targets, including polling machines, counting stations, and the computers that compile and count jurisdictional results. The use of systems that produce both print and digital records is trending nationally, with Verified Voting Foundation estimating 35 states and many counties elsewhere have deployed such systems.

Six U.S. senators have urged President Barack Obama to prioritize cyber crime at this weekend’s Group of 20 summit in China. In the letter sent to the White House ahead of the summit, Sherrod Brown, a senior Democrat on the Senate Banking Committee, and five other Democratic senators say they want the president to press leaders from the world’s 20 biggest economies to commit in joint communiques to a “coordinated strategy to combat cyber crime at critical financial institutions.” “Our financial institutions are connected in order to facilitate global commerce, but cyber criminals – whether independent or state-sponsored – imperil this international system in a way few threats have,” the lawmakers wrote in the letter.

10- Eight Surprising Statistics About Insider Threats
Although inside threat events occur less frequently than external attacks, insiders can do a tremendous amount of damage to an organization because of their access to sensitive data and systems. According to Accenture and HfS Research, nearly 70 percent of security executives reported an attempted theft or corruption of data by insiders within the last 12 months. In a Ponemon Institute study, 62 percent of users say they have access to company data they probably should not be able to see, and 43 percent of businesses take at least a month to detect unauthorized access by employees. According to the SANS Institute, nearly a third of all organizations believe they are unable to prevent an insider attack, and only 9 percent rank their insider threat prevention methods as “very effective.” Among email security risks, 45 percent of IT executives rate malicious insider attacks as the risk they are less prepared to handle. In a Gartner study examining malicious insider incidents, 62 percent of incidents involved employees looking to profit off of their employers’ data, 29 percent stole information as a way to further their own future endeavors, and 9 percent were saboteurs.

11- Global Banks: More Cyber theft Disclosures Coming Out of SWIFT
SWIFT – a private letter to clients disclosed that new cyberattacks have occurred on the global financial messaging system. The attacks, some of which have been successful, took place after SWIFT last updated customers on a wave of attacks that followed the Bangladesh attack. The letter says customer environments were compromised and attempts were made to send fraudulent payment instructions. The letter suggests attacks are increasing since the Bangladesh incident, and banks with lax security around SWIFT-enabled transfers are at particular risk. Since the Bangladesh attack, SWIFT has urged banking institutions to tighten security around the interbank messaging system with stronger systems for authenticating users and updates to its messaging software. SWIFT lacks regulatory authority over members, but the nonprofit cooperative told banks Tuesday that it might report them to regulators and banking partners if they fail to meet a November 19 deadline for installing the latest version of its software.