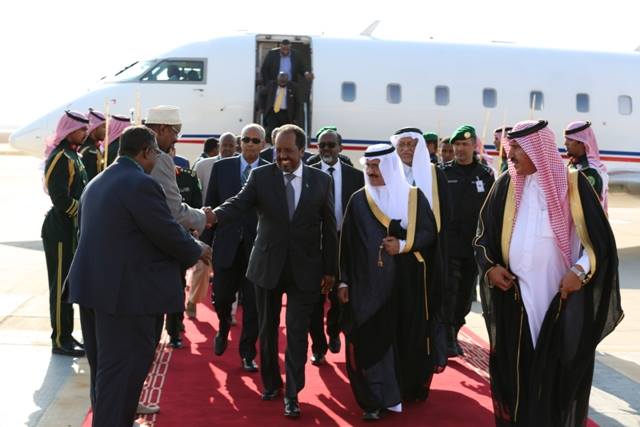 King Salman recalled the “extraordinary relations” between the two blocs, saying that “this partnership has brought us onto one platform.” He called on the leaders to “bolster cooperation at all areas.”

Custodian of the Two Holy Mosques King Salman with Arab and South American leaders at the 4th Summit of Arab-South American Countries (ASPA) in Riyadh on Tuesday.

“The situation is very, very seriously deteriorating, with the Huthis taking power and making this government vacuum,” Ban said, referring to the Shiite militia which dissolved the Sanaa government and parliament on Friday.
“There must be restoration of legitimacy of President Hadi,” the UN chief told reporters after talks with King Salman in neighbouring Saudi Arabia.

General Ban Ki-moon , Speaking in a region that has been torn apart by violent extremism, United Nations Secretary-General Ban Ki-moon told Arab and South America leaders in Saudi Arabia that heavy-handed tactics in fighting terrorism only add fuel to the fire.

“Violent extremism is a growing threat, as we have seen in Syria, Iraq, Libya and here in Saudi Arabia,” he said at the Fourth Arab-South American Summit in Riyadh, the Saudi capital.

“Da’esh [the Islamic State in Syria and Iraq], Boko Haram (in Nigeria), and other such groups must be defeated. But recent experience also suggests the strong need to make sure that heavy-handed approaches do not fuel the problem we are trying to solve.”

King Salman, while delivering the opening address at the ASPA Summit, said he appreciated joint efforts to fight the menace of terrorism regionally and globally.

Mr. Ban also appealed for women’s empowerment in order to achieve the ambitious Sustainable Development Goals (SDGs), launched by the UN in September and to be reached by 2030.

“Women can and must be able to drive progress,” Mr. Ban said. “Latin America has achieved notable gains in gender equality, in particular in women’s representation in Government and parliament. But too many women across the world continue to face systematic violence and other violations of their basic rights.

He appealed for leaders from the two regions play a positive role in next month’s UN climate conference in Paris, widely known as COP21, that seeks to combat global warming.

“The global transition to a low-emissions future is under way,” he said. “Here in the Gulf, one of the epicentres of the fossil fuel economy, solar energy and other renewables have great potential. On previous visits to this region, I have seen important steps to diversify the global energy mix.”

Mr. Ban noted that the Arab world faces great upheaval. “Democratic progress in Tunisia offers an important but lonely positive example, as the hopes generated by the Arab Spring have been dashed by conflict, instability and authoritarian governance from Syria to Libya and elsewhere,” he said.

“Latin American countries have largely made the transition that so many people across the Arab world yearn to make for themselves.”

He commended Turkey, Lebanon and Jordan for hosting millions of Syrian refugees, as well as Brazil and the other Latin American countries that have pledged to grant asylum, appealing to other countries to show similar solidarity as winter approaches.

The summits between the two regions were proposed by Brazil 10 years ago so that Arab and South American countries, which host the largest Arab diaspora in the world, can meet at the highest political level to deepen their ties.

The Secretary-General congratulated the King on the successful hosting of the Fourth Summit of Arab and South American countries.

According to a read out, the Secretary-General and His Majesty also discussed the situations in Syria and Yemen and agreed on the need for an end to these two conflicts. The Secretary-General expressed the hope that the next meeting in Vienna on Syria would devise a clear set of next steps in the political process.

On Yemen, Mr. Ban hoped that all sides to the conflict would take extreme care not to cause civilian casualties and that inter-Yemeni talks would take place this month. The Secretary-General also encouraged Saudi Arabia to further work closely with his respective Special Envoys for Syria and Yemen.

The two leaders also discussed the Israeli-Palestinian conflict and the need for both parties to resume negotiations in order to achieve just, comprehensive and lasting peace.