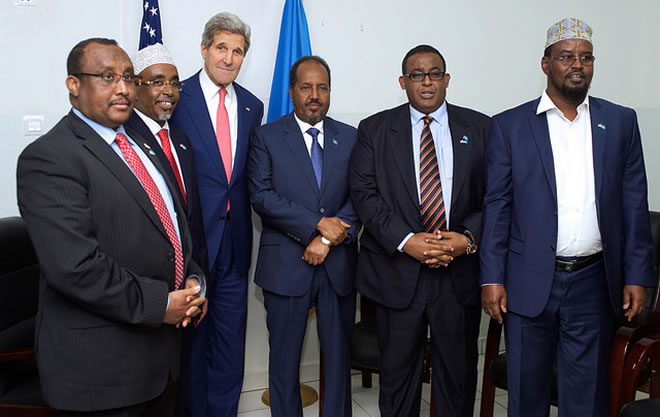 Djibouti (HAN) July 24, 2015 – Public Diplomacy and Regional Security Initiative News. Findings from a survey conducted by Research firm Ipsos were released yesterday in Mogadishu, Somalia, indicating perceptions of the citizens’ on peace and stabilization initiatives in Somalia. The findings show that three-quarters of Somalis are optimistic about the country’s future and 72-percent of Somalis believe they hold the solution to their destiny. The survey was conducted from December 2014 to February 2015. It is positive about the intervention of the African Union Mission in Somalia (AMISOM), in the country’s peace-building efforts, with over 65-percent of Somalis showing support for AMISOM.

“The optimism of the Somali people that is reflected in the survey results can be attributed to a lot of things that are going right in the country, including ongoing political progress towards Vision 2016 and delivery of the New Deal Somali Compact,” said Ms Nelson during the ceremony.

The research shows significant recognition of the work of the United Nations in Somalia in enhancing the lives of ordinary Somalis; with nearly half of the population agreeing that the humanitarian situation in the country is improving.

Speaking during the ceremony, Somali Federal Minister for Information, Culture & Tourism, Mohamed Abdi Hayir (Mareye) said such studies are very important in informing the recovery processes in the country.

“Today we have attended a presentation of scientific research findings which was carried out by IPSOS in four regions of Somalia. This truly touched on so many issues, for example the people’s perception regarding governance, politics, AMISOM and also education. The people’s support to those they want to intervene and solve their disagreements and lead them politically and also many issues concerning their lives. This study is the first one that has been done in a long time in Somalia,” said Minister Mareye.

Sheikh Bashir Ahmed Salad, chairman of Association of Somali scholars noted that the positive perceptions and attitudes of the population point to progress in the country.

“Today, I have attended a conference for unveiling research findings that surveyed the views of a lot of people. The subjects were asked a lot of important questions. The questions asked were very important according to my understanding, the results are also vital. In general it identifies that the people are open minded, if the Somali person speaks neutrally, he speaks well while interpreting his religion, his country and speaks truly about his needs and feelings. So frankly I appreciate those who have carried out the study. I am also happy, although the communities have witnessed a lot of problems during the years; they are still mentally healthy, lively and still holding on to the essentials like their religion, their country and their collective interests,” noted Sheikh Bashir.

Fadumo Abdi Warsame, the chairperson of Somali Youth forum who was one of the supervisors of the field researchers called on the government and partners to utilize the findings in addressing the issues important to society. “This program of the unveiling of this study is one that I am very happy with. Somalia needs many in-depth scientific researches because when a country collapses and confusion ensues, the people will need everything done through such studies for recovery. I am very happy with the way this research was carried. I am different from the rest because I had been a fieldwork supervisor in this research program which was conducted by the Somali youth. I thank all the youth from those 4 regions for their contribution as well as both international and local organisations for their role. I am hoping that the Somali people will use those findings positively as intended. These are some of the things that we were missing and I expect the Somali people to utilize it,” he said. AMISOM/UNSOM